Above, the watery chaos. Below, the world in its many layers. And in between, the domes, forged of crystal by the gods.

Many worlds are there. Infinite domes under those waters of chaos. But of all these worlds, we can only write of five, our own and the ones most directly adjacent to it. All worlds more distant we only know through rumor and speculation from distant travelers. Each world has what we may call the same anatomy, the same layers, although of course the details diverge in all. 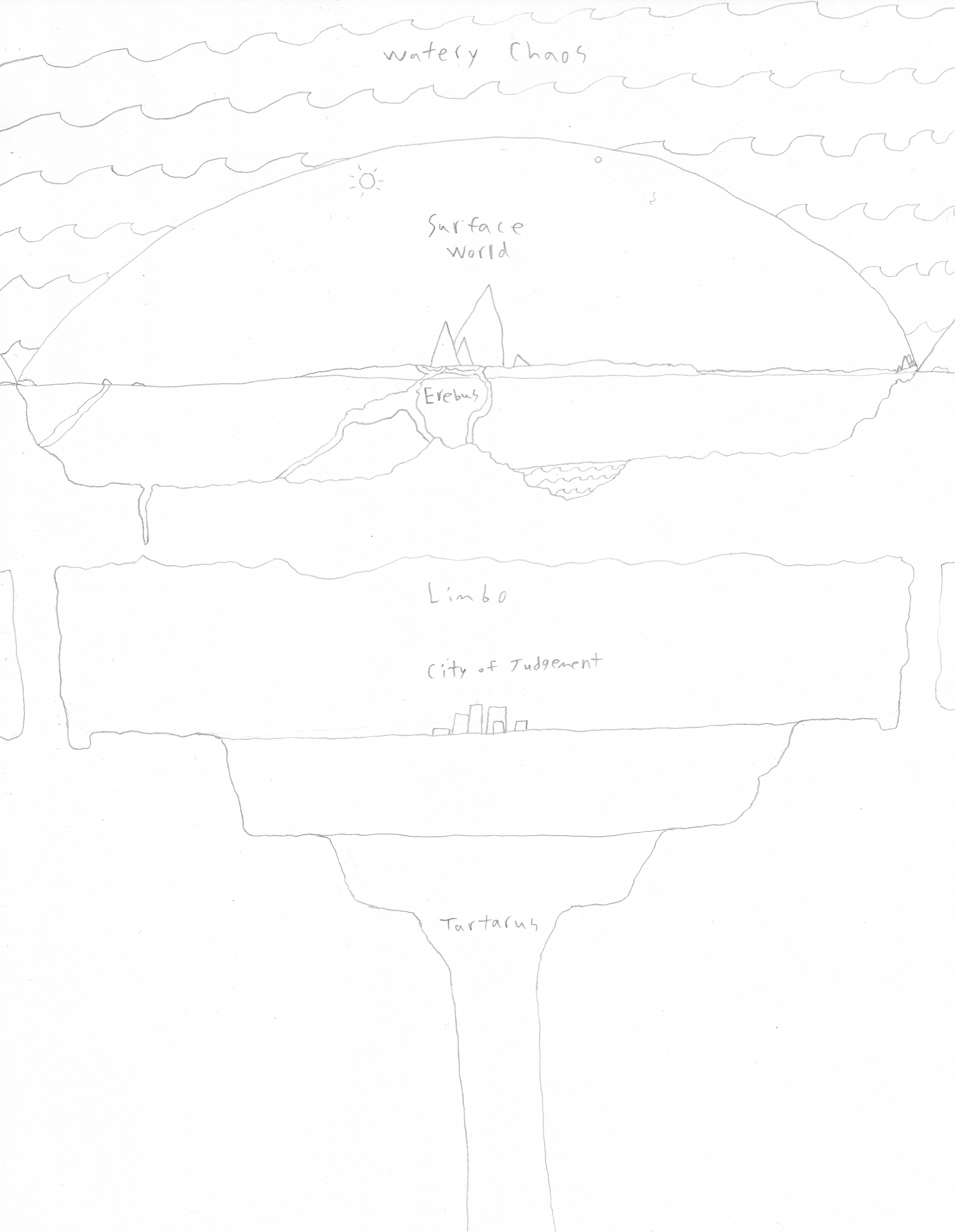 Over the domes is the watery chaos, an ocean without limit. It is from this chaos that dragons are born, growing from cracks in the dome’s surface. These marks are repaired swiftly by the angels, but more will always form, and so the world suffers plagues of dragons.

Each and every world has a surface, with a sun and at least one moon. The celestial objects are distant, but many have reached them and reported their strange surfaces. Every day, the sun moves across the sky, close to the dome, coming down in the far reaches of the world and circling underneath to pass through limbo.

Below the first level of the surface, there is a honeycomb network of tunnels, heavily inhabited with beings who emerge onto the surface for feeding at night. Some of these tunnels connect to the land below, known in Midgard as Erebus and called such in all realms. Erebus is a land of eternal night, lacking in any light but that which is derived from unnatural sources. The creatures native to these sunless depths are those who require no light, finding ways to feed in a land where green things cannot grow.

Below Erebus, inaccessible through normal means, is the underworld in its many layers. All souls sink here, first to Limbo, where they are judged and sent to camps for reward or punishment, preparing them for rebirth. Hell is a great forge, where the souls of the old are made new and sent fresh to new lives, all glory to the gods who devised such a system for us.

Some beings, however, are too vile and vast in power to ever be reborn. These unfortunate souls are thrown into the eternal darkness of Tartarus. What sorts of souls lurk in that hell below hell are unknown, but some scholars say that there is only one Tartarus for all worlds, and that the most horrid things from across all reality lurk there. One must hope that they may never find a means to leave these deepest of depths. 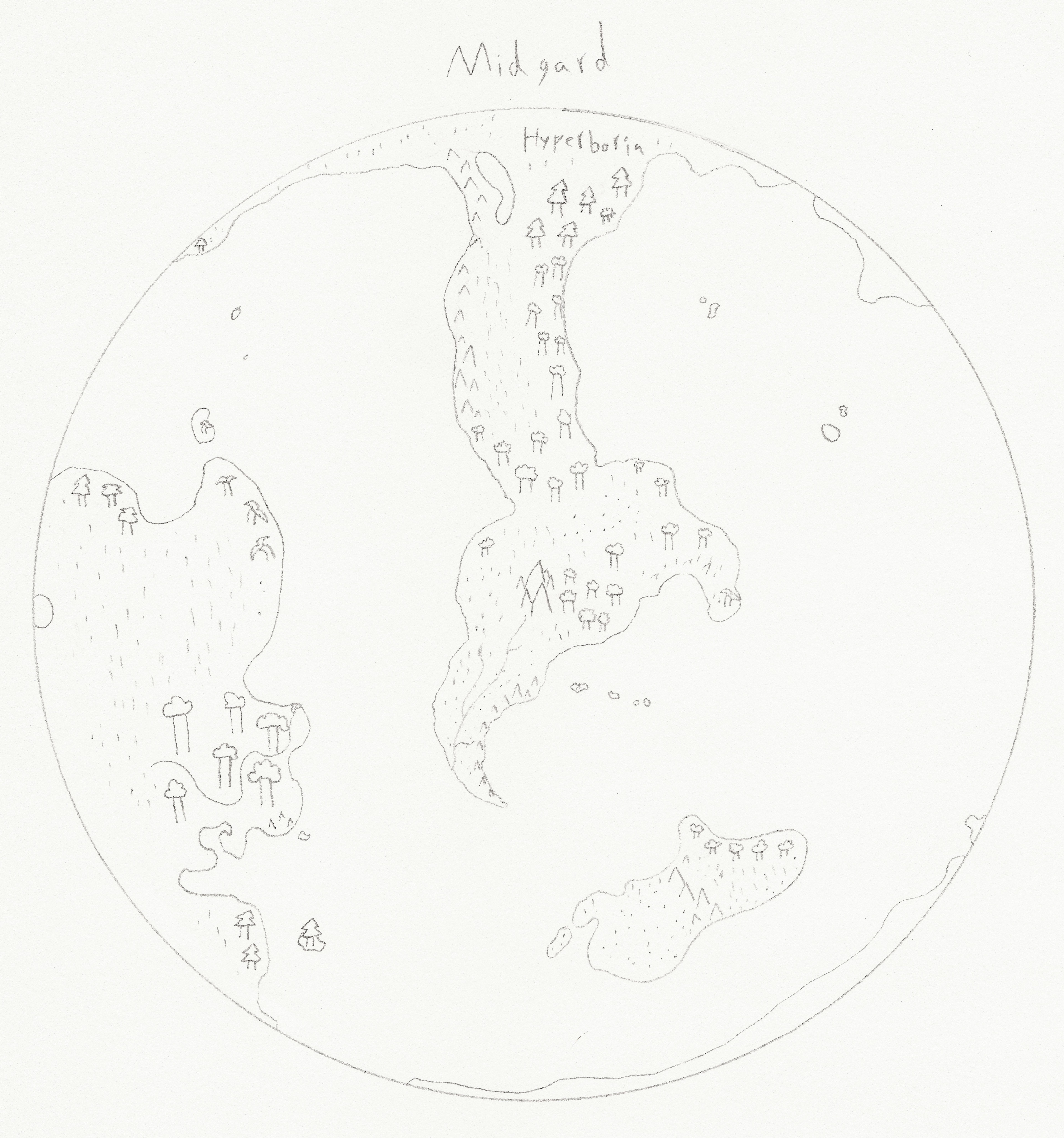 Our world. The surface once belonged to mankind, the tunnels to the antfolk, and erebus below to things unknown, but today, all have been disrupted. Now pureblood men are rare, as ogres and beastfolk are born of our loins, and whispers of chaos rise from Erebus by the day. Unnatural creatures, created by magic, roam the land, dangerous, but some say they can be tamed.

Two moons float in our sky, the first, Haraveus, having been cleft in twain by a god’s blade. It wanders aimlessly in the sky, low now as it crawls near the central peaks, the world’s highest mountains. Its replacement circles far overhead as it should, a flawless sphere.

Mermaid- Rulers of the Waves

Ogre- The Next Step 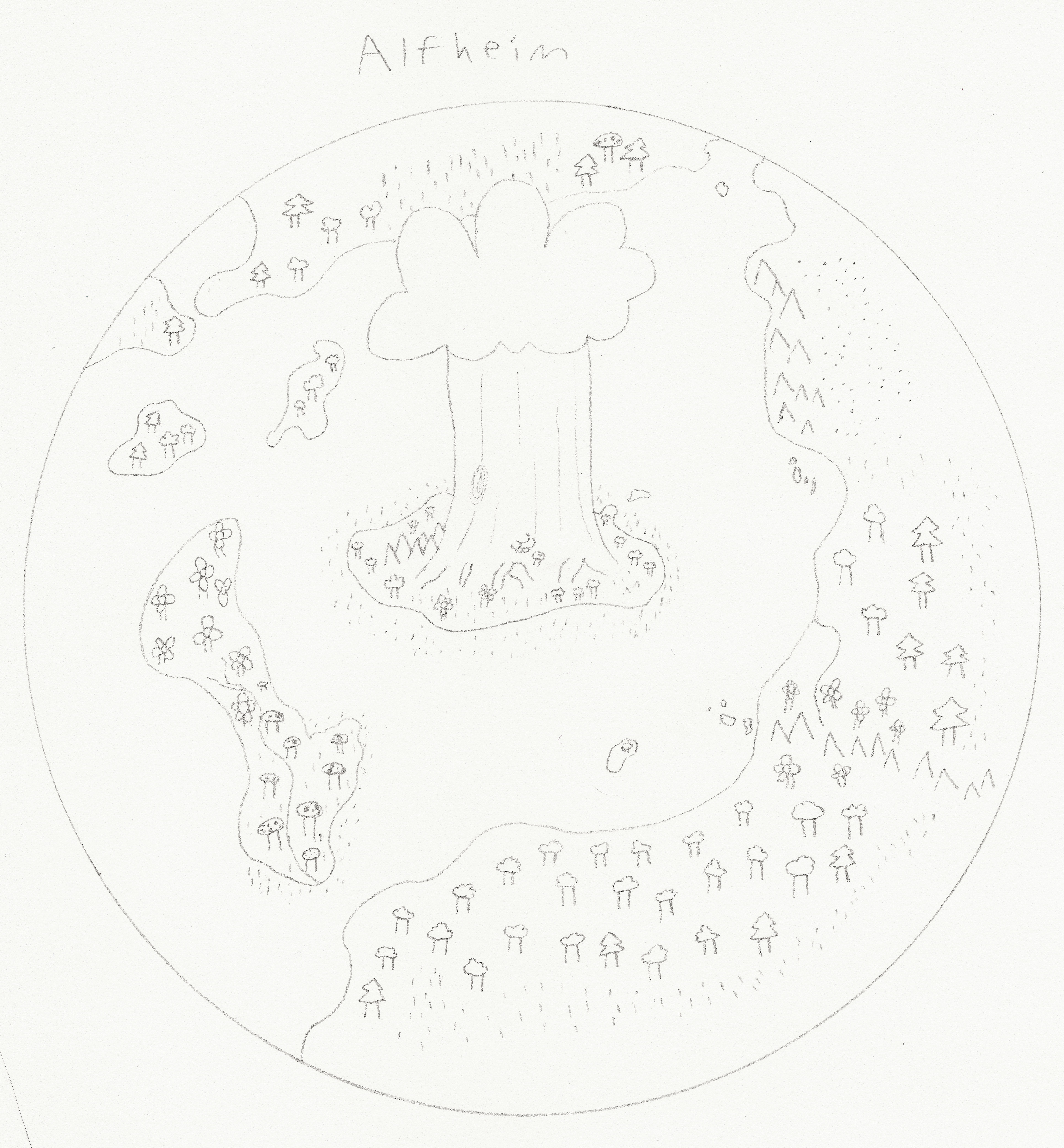 Land of the fae, an abnormally diverse race, all capable of breeding amongst themselves despite their physical differences. Their world is centered on a glorious world tree whose branches scrape the dome and whose branches extend into Erebus. No polities rule the fae, and their world is one of chaos and magic.

Greysend- Tongues for the Dead

Leshi- Lords of the Forest 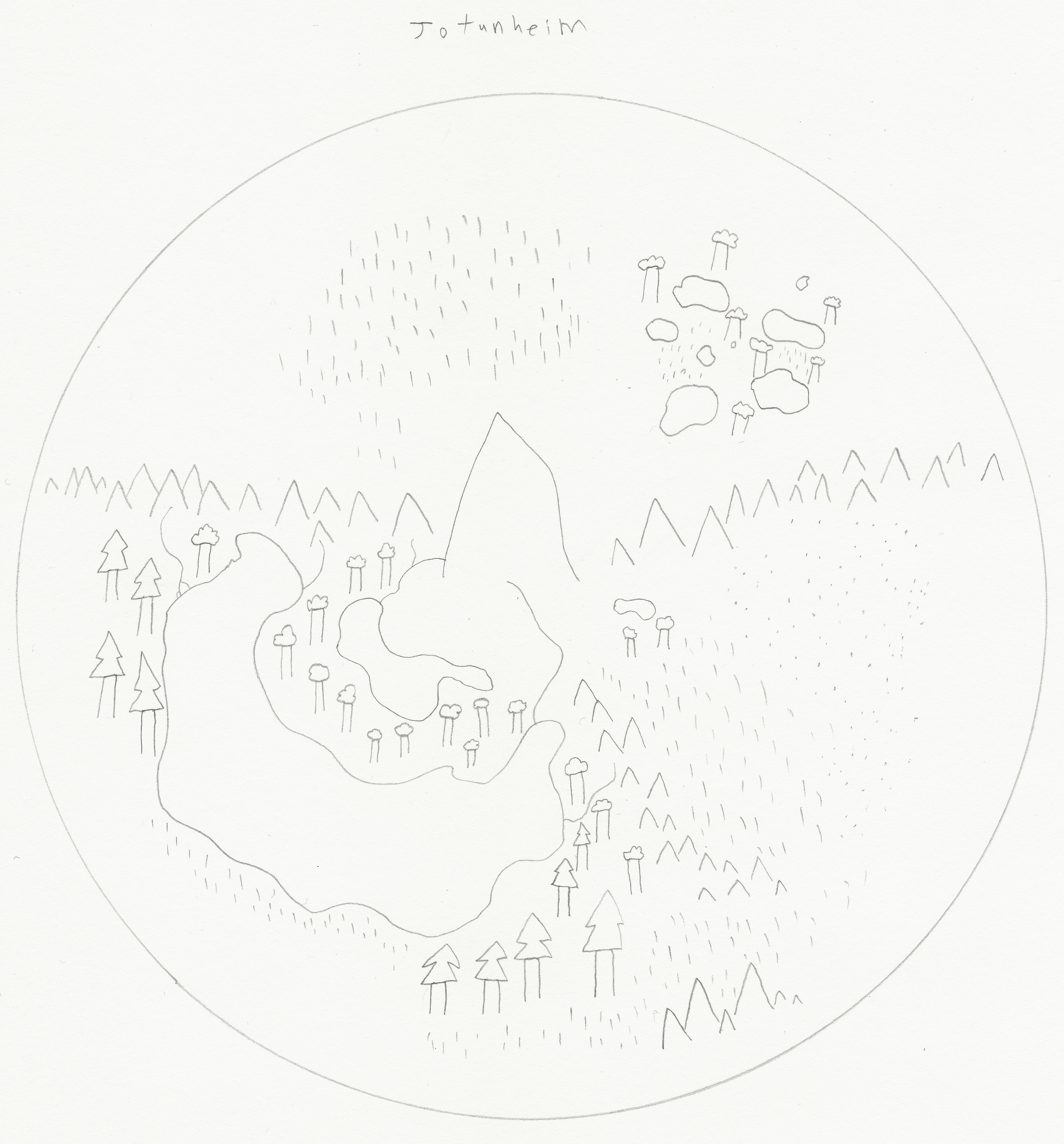 A land of enormity, inhabited by the many races of giants. Their land has very little ocean, leaving as much space as possible for the giants to roam. Their wildlife tends towards the enormous, their landscape prowled by titans so enormous that the giants themselves are babes at their feet. 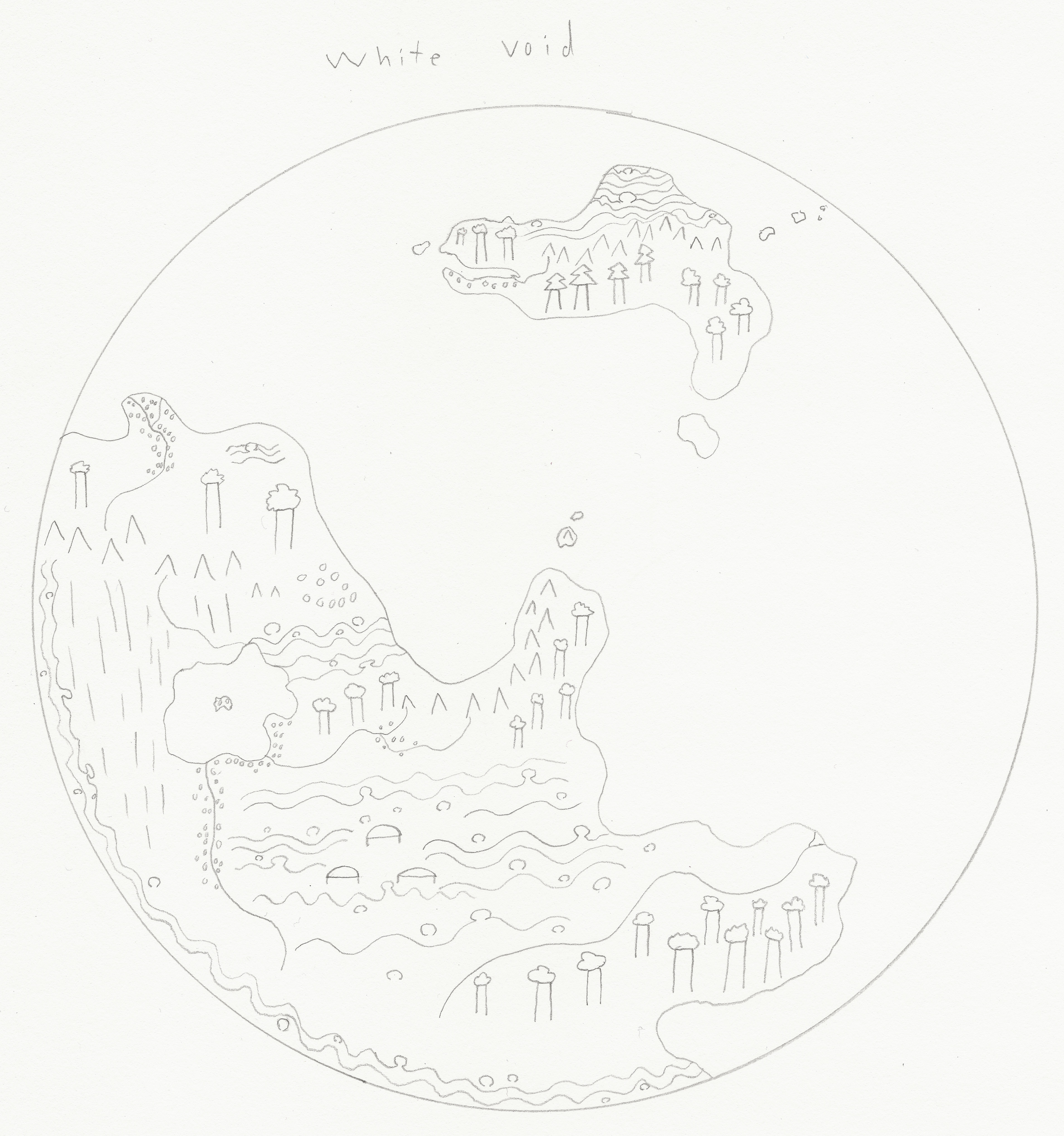 White magic is a glorious thing, mending wounds and granting life to the dying. However, magic is a tricky thing, and there is always such a thing as too much. When you step into the White Void, you can feel the magic and see its effects. It is always day there, light forming a white haze in all directions, and flesh and plant life vie for space on every surface.

At first, those who enter will feel better than they ever had, finding themselves standing taller, breathing better, their muscles gaining tone they lacked before. Within a few days, that good feeling passes. The slightest scratch boils over into venomous infections and the flesh grows without limit. Whether killed by infection or tumors, few natives of another world will live for long in the Void. However, some strange life thrives there, such as gargantuan versions of the tiny creatures that dwell in our body and beings of raw, untamed flesh.

Creatures of The White Void: 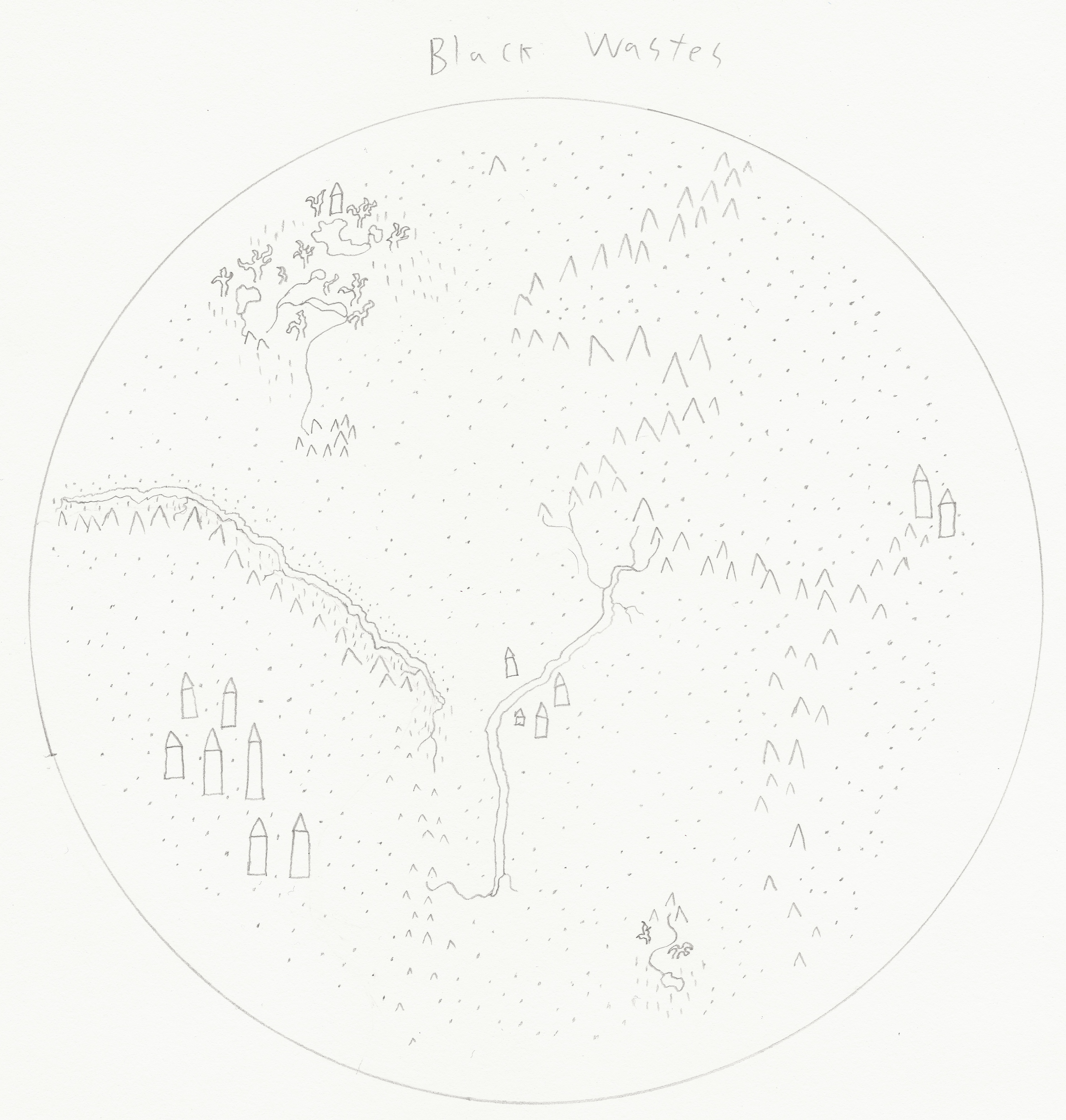 Black magic is the opposite of white, capable of killing and harming those it touches. It sees the most use in war, but with finesse, can slay tumors and infections. The Black Wastes are overrun with infinite black magic. Without protection, even a few hours of exposure will cause you to waste away slowly over the next few days, unable to digest food for unknown reasons.

The Wastes are mostly inhabited with artificial beings, engineered by unknown masters to survive their wretched realm. The sun is stopped in a black sky, casting a dim red glow over the surface of the world, only remaining buildings strange palaces wrought of steel.

Creatures of The Black Wastes:

Some beings are from worlds beyond those we know, or simply not tied to any one dome. These include dragons, who are born from chaos wherever it lands, and angels, servants of the gods who appear wherever they are required. These beings are often alien, resembling nothing we know.

Dragons are reptilian creatures of chaos, dragons are formed when the oceans above manage to break through the domes, dropping through cracks and holes to fall to the world below. From these waters emerge dragons, alien to all worlds. Dragons are phenomenally diverse creatures, unified by only a few traits. First, all of them seek out treasure, although what treasure they desire differs by species. Second, all dragons can fly. Third, they are immortal, resistant to disease and poison due to their chaos-infused bodies. They only die when struck down by a foe, and intelligent dragons can gain heights of wisdom far beyond those of most mortals.

Jaculus- Spear of the Wind