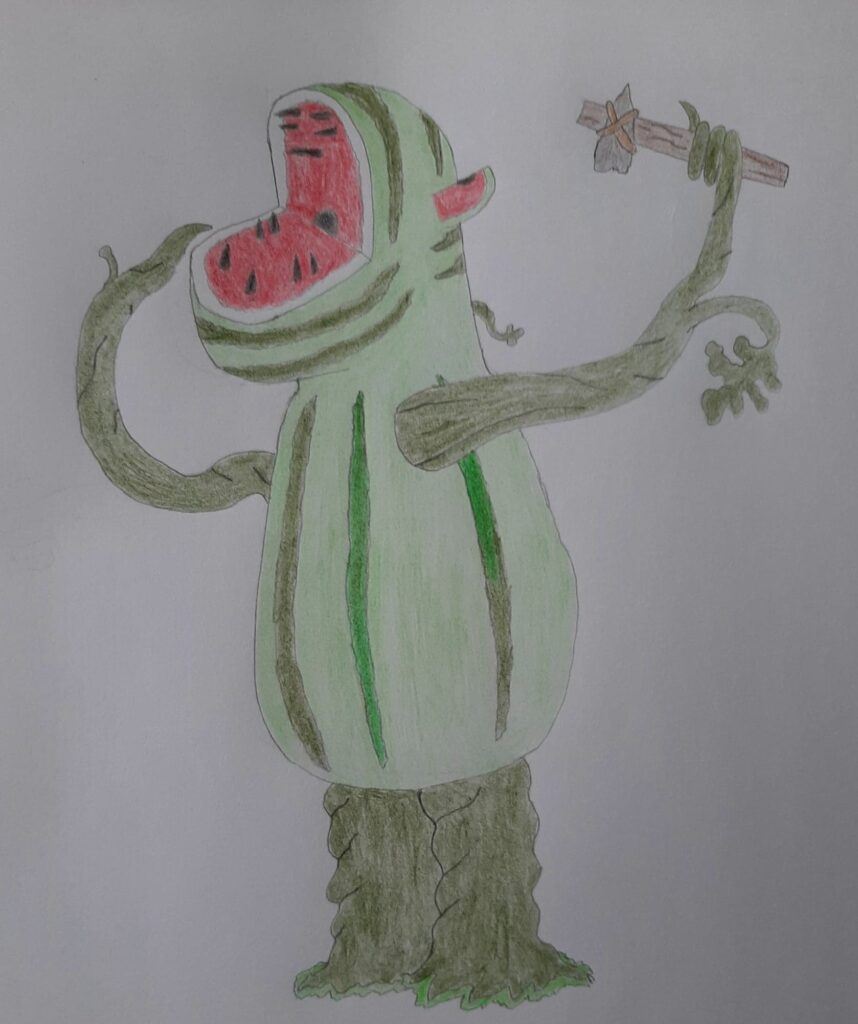 Habitat: Deep jungle in the wild, any warm region if raised properly

Deep in Alfheim’s equatorial jungles, frequenting both land and water, are the langa. Frequently called “melon trolls” or “melon ogres” by Midgardians, the langa are not related to either being, being purely plant life. Their vine arms are capable of only limited dexterity, enough to use crude tools, but incapable of fine motor skills. Their tough skin forms a hard shell around their soft flesh and is smooth enough that most predators cannot get a grip on them. Those that try will be met with the langa’s brutal bite and ability to spit sharp seeds.

As plants, langa grow from seeds, usually pried from their parents’ bodies by scavengers after their deaths and carried away. They only grow if left in a suitably damp location, leading to a creeping vine with a single, rapidly-growing melon. Within a month, the melon has taken on a humanoid shape, and the langa detaches itself from the vine to forage on its own. It continues to grow quickly, and reaches adulthood and full size within a year. Langa are hermaphroditic and will take several mates before dying and cracking open, allowing scavengers to swallow and spread their seeds.

In this short lifespan, langa live a quiet lifestyle devoted to the constant acquisition of food. During the day, they are active on land, retreating to the river if attacked by a predator their bulk cannot handle, although as they grow, they are increasingly reluctant to run from any foe, becoming more belligerent and prone to attack. At night, they do not sleep, but feed within their river homes. They are sometimes seen with stone tools, but nobody is certain when or how they make them. Some say that there are special langa, deeper still in the jungles, who live longer and create whole langa civilizations. Others say that irresponsible pixies have been arming the langa for their own entertainment. This has been considered more likely.

Langa have been successfully domesticated by several tropical faeries, and have had much of their aggression bred out of them, making a consistent food source that defends itself. Trolls in the proper climate will often give their children a baby langa as a “starter pet”, considered a good choice due to their short lifespans and delicious nature.