You know, I wasn’t expecting my very second article to be about an internet indie thing. Sure, I had the name for the category lined up and everything, so I intended on eventually tackling internet originals, but I expected a feature on TV or fiction first. However, then I was hit by the exploding popularity of Hazbin Hotel, a patreon-backed animation pilot that’s amassed 12 million views over the two weeks it’s been out.

https://youtu.be/Zlmswo0S0e0 See it here, if you’re so inclined. Just a warning though, this is not a children’s cartoon. It’s about 60% sex jokes and slurs by weight. It is Hell, after all.

If you aren’t so inclined, the pilot takes place in Hell, populated by demons, both natively born there and produced from the souls of sinners. Every year, the demons enact a brutal purge of their members, their only means of preventing overpopulation as more and more demons are born. The main character, Charlie, sets up a rehab center she calls the Happy Hotel, intended to reform demons so that they can leave hell. You can see how that goes yourself, since I’m not here to talk about plots, but monsters! In part one, we’re tackling every named character! 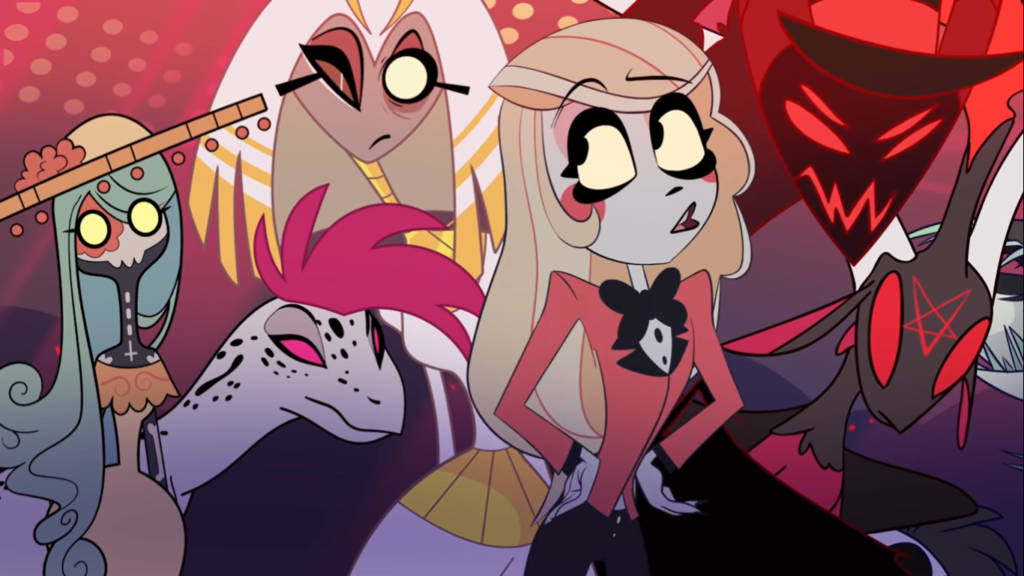 She’s the fancy one with clown makeup.

It’s difficult to find a good shot of Charlie on her own, and as you can see, she’s not the most interesting as a monster design. She could effectively be mistaken for a stylized human from the front, although from the side, she’s got a clear dog nose. Surprise furry!

However, in this shot you can see just how wildly varied demons get in this show. I especially like a skull-faced charmer on the far left and the hauntingly cute goat demon with alien eyes to Charlie’s right. We see a lot of demons that are effectively just furries/scalies/you know what I mean, but a lot rise above just being anthropomorphic animals with cool details like that lizard’s gorgeous patterning. 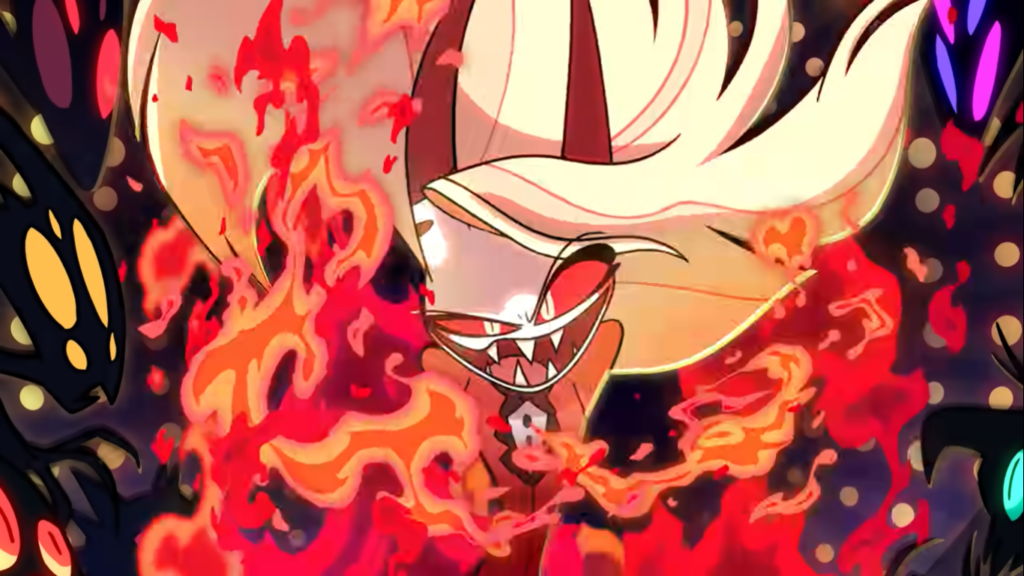 Reminding us she’s a demon.

However, when Charlie gets particularly excited, she does get a little more interesting looking. She’s not exactly the most innovative demon, but I quite like her design this way. The darker red horns go well with her suit, and the blood-red eyes are sported when talking about violence and screaming, suggesting Charlie isn’t quite as above the usual demon nature as she appears. 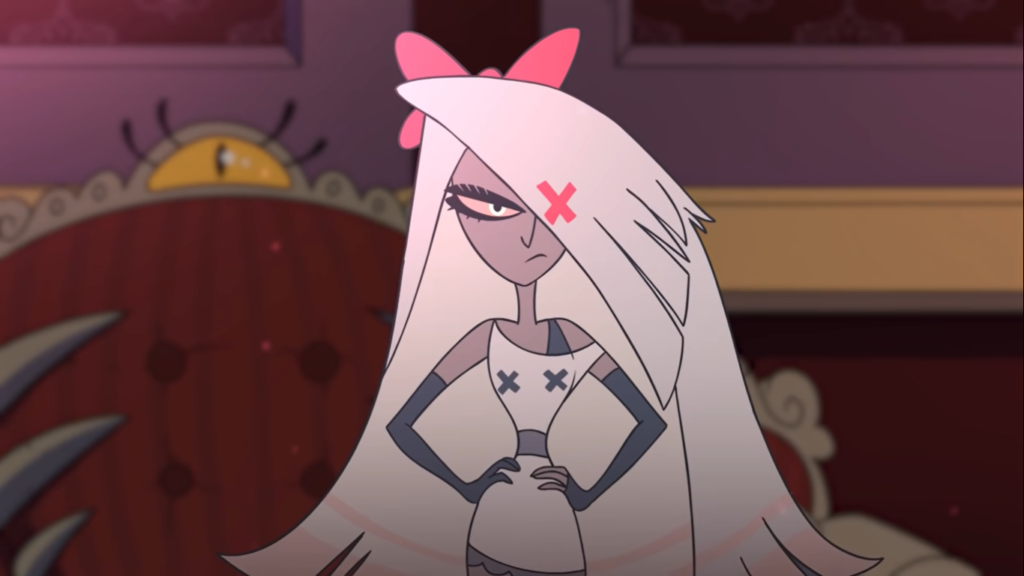 Charlie’s girlfriend and partner in running the hotel, Vaggie is similarly human-looking. Again, fine as a character design, but as a monster design, all she’s really got is the grey skin and the X over her eye, which admittedly is pretty stylish, especially now she’s incorporated it into her outfit. Not much to say about her, she mostly plays straight man to Charlie’s exuberant Disney Princess energy. 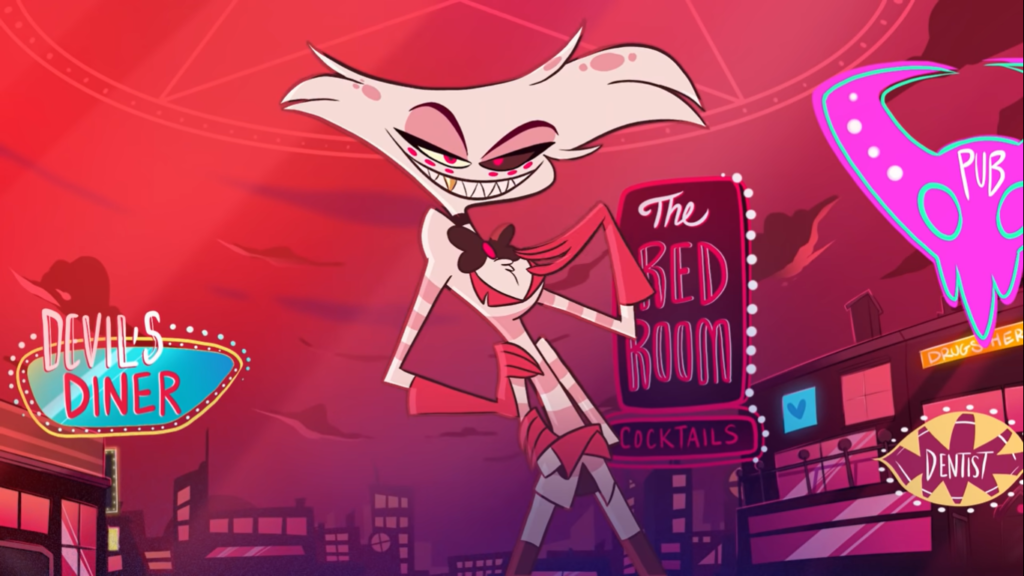 This body hardly seems like a punishment for a sinner of his sort.

Angel Dust is the Happy Hotel’s only current patron and an adult film actor. Angel Dust is my favorite design of the main cast, really showing how far you can get from a general human shape and retain an expressive character design. I love his color scheme and how much his clothes match the color of the fur that seems to cover his body. His four arms should create a challenge for posing, but only end up making him more expressive, really conveying his constant energy. He can even grow more arms when he needs to, but I prefer him as is. Don’t change, Angel. Well, not physically. 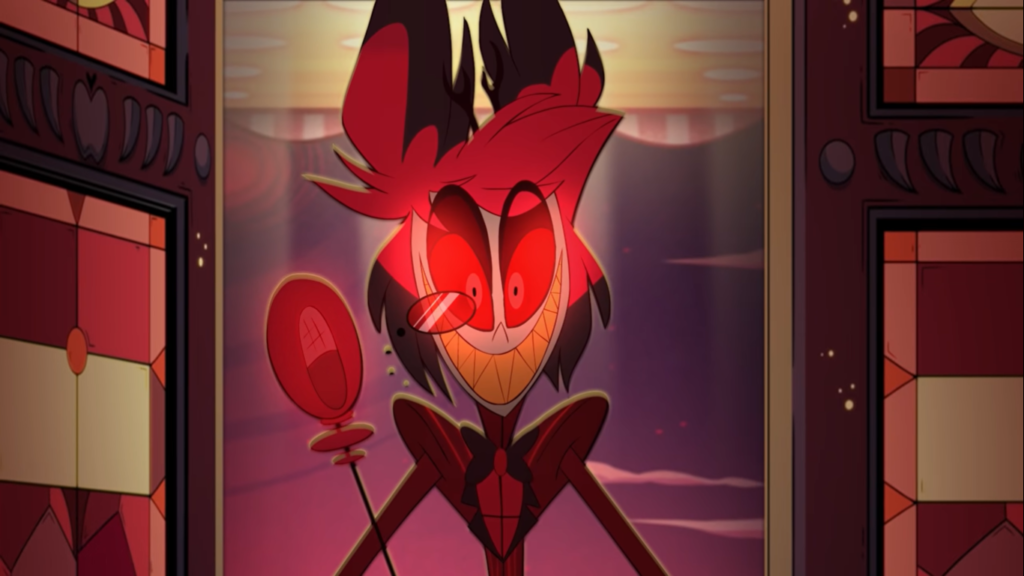 One of the most powerful demons in all of Hell, most of what is interesting about the man known as the Radio Demon doesn’t really come across in still shots. I do like the glow to his eyes, but overall he’s another near-human, loaded up with a big mouth with big teeth and a pinstripe suit. However, animated, we get a lot more out of him, with a shadow that moves independently of him and radio effects applied to his voice, with occasional audience sound effects thrown in for fun. 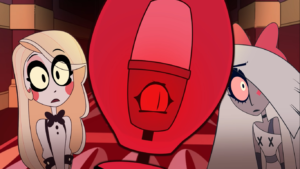 Something I can capture in screenshot form is that Alastor’s microphone-equipped cane is apparently sentient and capable of speech, opening up an eye and responding to Alastor when talked to. Being me, I mostly wonder about what the exact nature of this thing is. Is it a separate person who died with Alastor, a servant or partner from his past life? Is it another demon who happened to be a microphone cane already that he recruited? Did he use his powers to create it or forcibly turn somebody into it? Or is it just a part of him that he has talk on its own just cause he can? Do any of my questions matter? It’s my website, so I say yes, the answer is yes, they do. 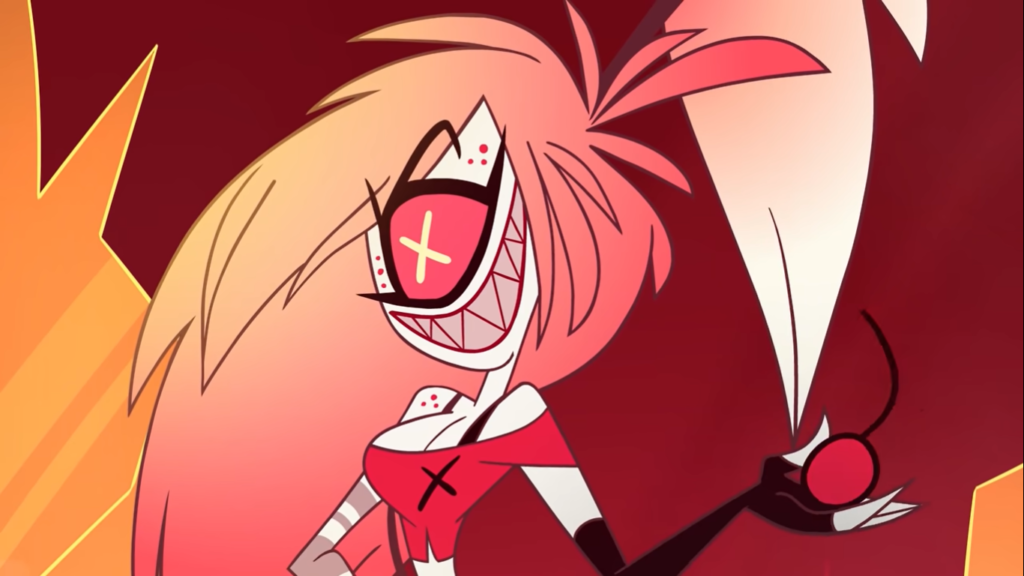 Moving onto the less important named characters, we have Cherri Bomb, one of the many wannabe dictators that has emerged in the power vacuum left by the last cleansing. I’m always a sucker for a cyclops, and her singular eye is especially great, with its bright red scelera and iris (assuming they’re separate for her at all) and x-shaped pupil. Some animals actually do have pupils with even stranger shapes than this, although those are still black, not white or light yellow, so I can only assume Cherri Bomb is blind and makes up for it with high explosives that will hit everything at once. 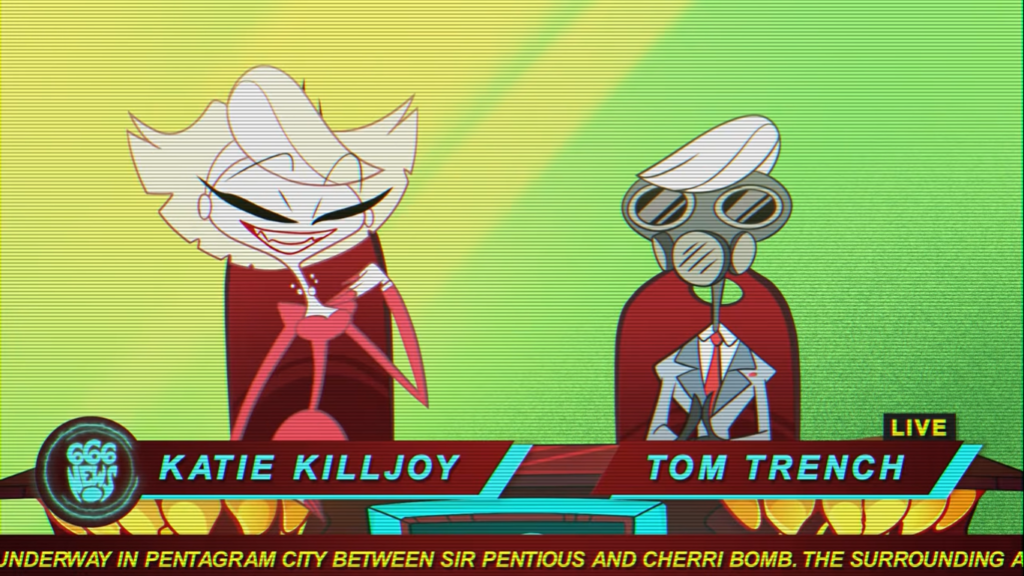 Anchors of Hell’s biggest news station, Katie Killjoy and Tom Trench are both simplistic but charming. Katie Killjoy has absolutely massive red eyes, something I’ve been a fan of with several demons so far. It’s not the redness, it’s the bigness. She also has hidden insectoid limbs that come from her pencil-thin torso when she’s especially furious, which is quite the high bar for her. Tom Trench on the other hand is just hilarious and adorable. That big gas mask on his tiny neck, the little tuft of hair on top of it, he’s ridiculous and I love him. It’s unclear whether the gas mask is a part of him or a piece of clothing, and I’m not sure which I would prefer. Sure, a face that looks like a mask is always awesome, but so is a monster whose face you never see. 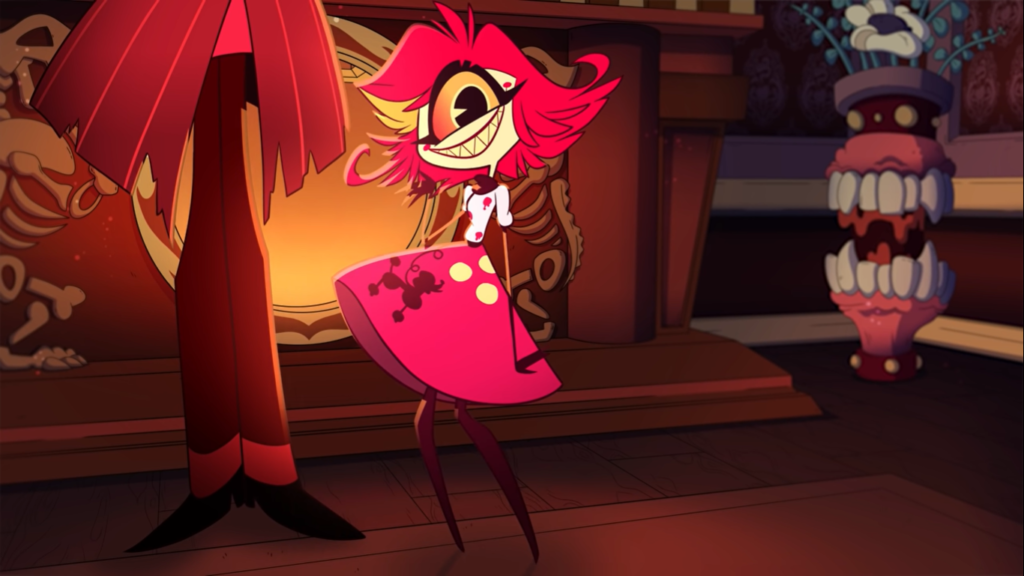 Another cyclops! This cartoon spoils me. Nifty here is quite nifty, with a super-cute hairstyle and great coloring overall. Her big skirt works well with her tiny twig legs, whole design communicating this hyper little goblin’s tendency to rush around, speaking three words a second.

Also, if anybody knows how to get the flower planter in the background of this shot, please send your info my way, thank you. 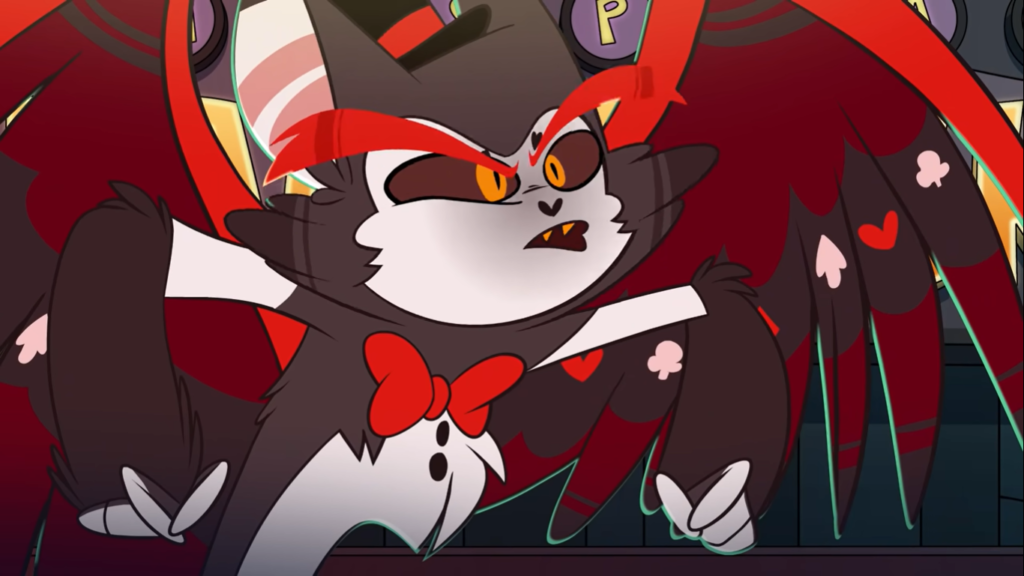 This winged cat’s design communicates quite well his gambling tendency, with a built in “vest” and card symbols on his wing feathers. He’s also got funny eyebrows and I like that. And of course, another bit of apparel that could either be natural or clothing, his bowtie. Must suck to be stuck with that for all eternity. 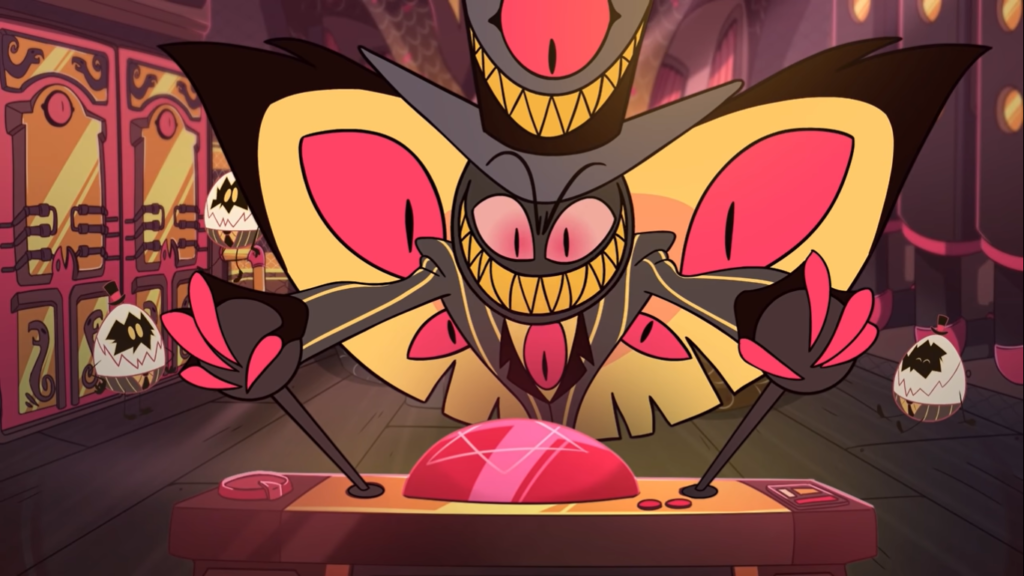 I saved the best for last, my favorite of the pilot’s named characters, Sir Pentious. The hood we see him flaring up is usually hidden, only flaring up as a display when he’s especially enthusiastic. His serpentine body is similarly covered in similar-looking eyeballs, matched by his hat. Much like Alastor’s cane, it is unexplained where this apparently sentient cap came from, but it copies all of Sir Pentious’ expressions, which is what I want my hat to do. Not expressive enough? Get a Smilehat! Patent me, copyright me.

His minions are also charming. I’m not sure why a snake man has an army of eggs, besides I suppose snakes liking to eat eggs, but I’m glad he does. They’re darling, with their jagged smiles and their tiny eyes peering out of darkness. Although they do raise the question of where such things come from. What do you have to do in life to be born as one of dozens of identical egg-people? Presumably, they reproduce on their own in hell.

This finishes part one! Next time, we will be covering the many unnamed background characters of the short, and HOO BOY are they wilder than the main cast!