Spotted Hyenas are a very special animal to me, and so I’m glad to inaugurate my “Real Monsters” section with a post all about them. Their biology is fascinatingly alien for mammals, their intelligence puts them on par with the primates, and let’s face it, they’re just adorable. 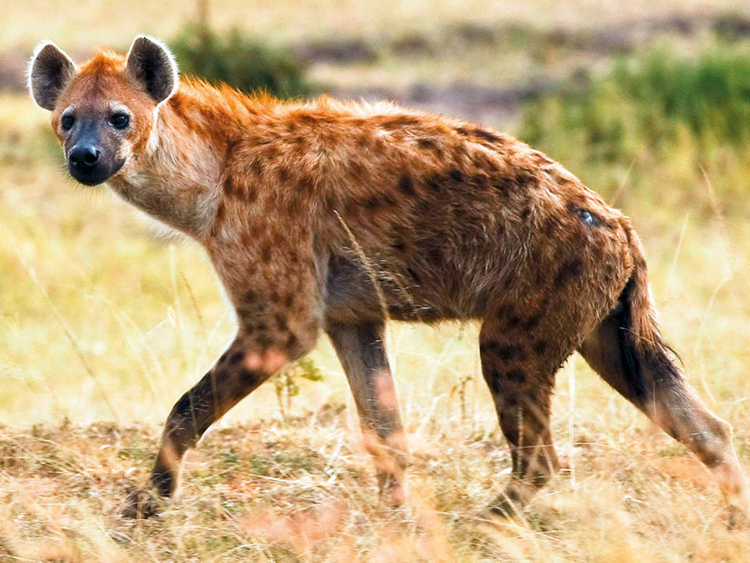 Of course, of all the animals I adore, hyenas might have attracted the most misconceptions over the centuries, and that’s saying something. Everything from the taxonomy of the hyena family to their behavior has been riddled with misconceptions that persist to the modern day. And so, I’d like to tackle what most people get wrong about hyenas and hope you come away with a little more appreciation for what’s so special about these animals.

The first mistake is an understandable one to make, and it’s one that has plagued us at least since the ancient Greek philosopher Strabo wrote of them back in the late Roman Republic. In his Geographica, a text detailing information on the entire known world, hyenas are recognized as living in Africa and identified as wolves. This was an incredibly long-lived case of mistaken identity; over a millennium later, many people still call hyenas dogs.

Like I said, this is understandable. On the surface, hyenas really do look canine. However, taxonomy, the science of how living organisms relate to one another, does not just look at surface features. Carnivoran mammals (not to be mistaken for carnivores in general) are split into the feliforms and the caniforms, effectively carnivores more closely related to cats and those closer related to dogs. Hyenas, despite appearances, are on the feline side of the family tree, although still quite distant from anything we would be comfortable calling a “cat”.

A misconception well known in the ancient world but not popular today for obvious reasons was that the hyena was either a hermaphrodite, possessed of both male and female reproductive parts, or capable of changing its sex at will. The latter is mentioned by naturalist Thomas Pennant in his History of Quadrupeds. While the book was written in 1771 and contains a great deal of other mistakes we will be tackling later, it rightfully dismisses this particular ability as superstition. However, if it is false, why did so many believe it to be true?

Well, while sometimes a fantastic element is conjured from nothing, there is actually an element of truth to this bizarre claim. While hyenas cannot change their sex (many animals can, but no known mammal), they do truly have some of the strangest females in the animal kingdom. For one, female hyenas are, on average, larger than male hyenas. While among certain clades (groups of animals) this is common, among mammals it is practically unheard of. 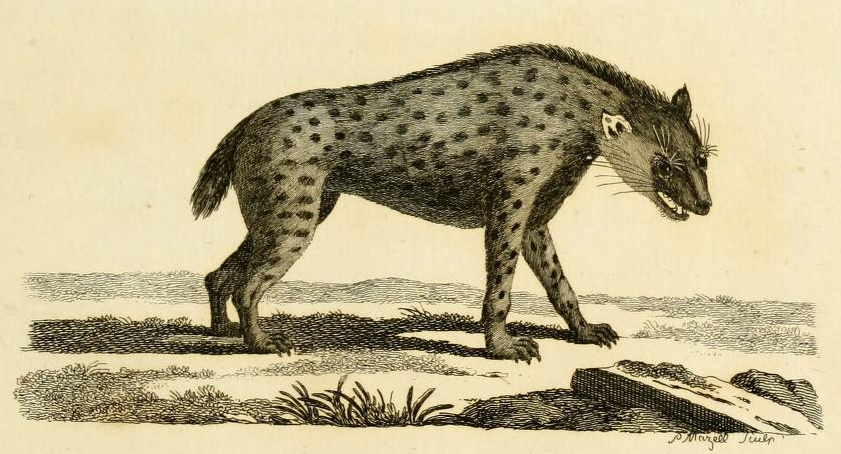 In addition, a hyena female’s body is running on so much testosterone that their genitals are masculinized. Their clitoris resembles a male’s penis. You might imagine this makes it extremely difficult to reproduce, and, well, you would be right. First-time mothers often die in childbirth due to blood loss. On the other hand, this difficult arrangement gives the females choice in which males to be impregnated by. When the women are larger and so difficult to penetrate, males get nowhere by force.

Back to Thomas Pennant, while he saw through some of the myths about hyenas, he perpetuated another myth, and a much more enduring one at that. This is one that has stuck well into the modern era. Among some (accurate) information about the hyena’s foul temper and violent nature (lest we let that turn us away from them as fantastic creatures, I remind you that we adore lions, who are also incredibly violent), he portrays the hyena as a solitary scavenger.

This is another mistake that is understandable in a world before rigorous study of animal behavior. Most of the hyenas people would come in contact with near settlements would be alone, seeking out an easy meal. No need to bring your friends along looking for garbage. That would mean you’d have to share that tasty femur you dig up.

However, in actuality, hyenas do form social groups, even if they don’t always hunt and forage while in them. And yes, I said hunt. While I note there’s nothing wrong with being a scavenger and it’s just human biases of honor and pride that make us prefer a bold, aggressive predator over a cowardly, sneaking scavenger (not that the later stereotype of scavengers is anywhere near reality either, I’ll get to that), hyenas really are incredible predators.

Depending on where they live, hyenas hunt between 50% and 80% of their food. Instead of ambush, hyenas hunt through stamina and pack coordination. They will chase prey until they managed to get close, then bite for vital areas. When hunting in packs, they can gang up to tackle prey as large as juvenile hippopotamuses… hippopotomi? That’s not right? Okay. Showing their cleverness, they can also divide up tasks. Often, one hyena will harass a mother wildebeest, distracting her while another sneaks up and attacks her baby. Befitting of this teamwork, hyenas do not fight among their own clan for food. Instead, each hyena just guzzles food as quickly as they can, a task they are brutally suited for. A hyena’s jaws can crush the bones of even the largest antelope, which can outweigh domestic cattle. If you want to get your kid to eat everything on their plate, convince them they’re a hyena. Then stop them from eating the plate. 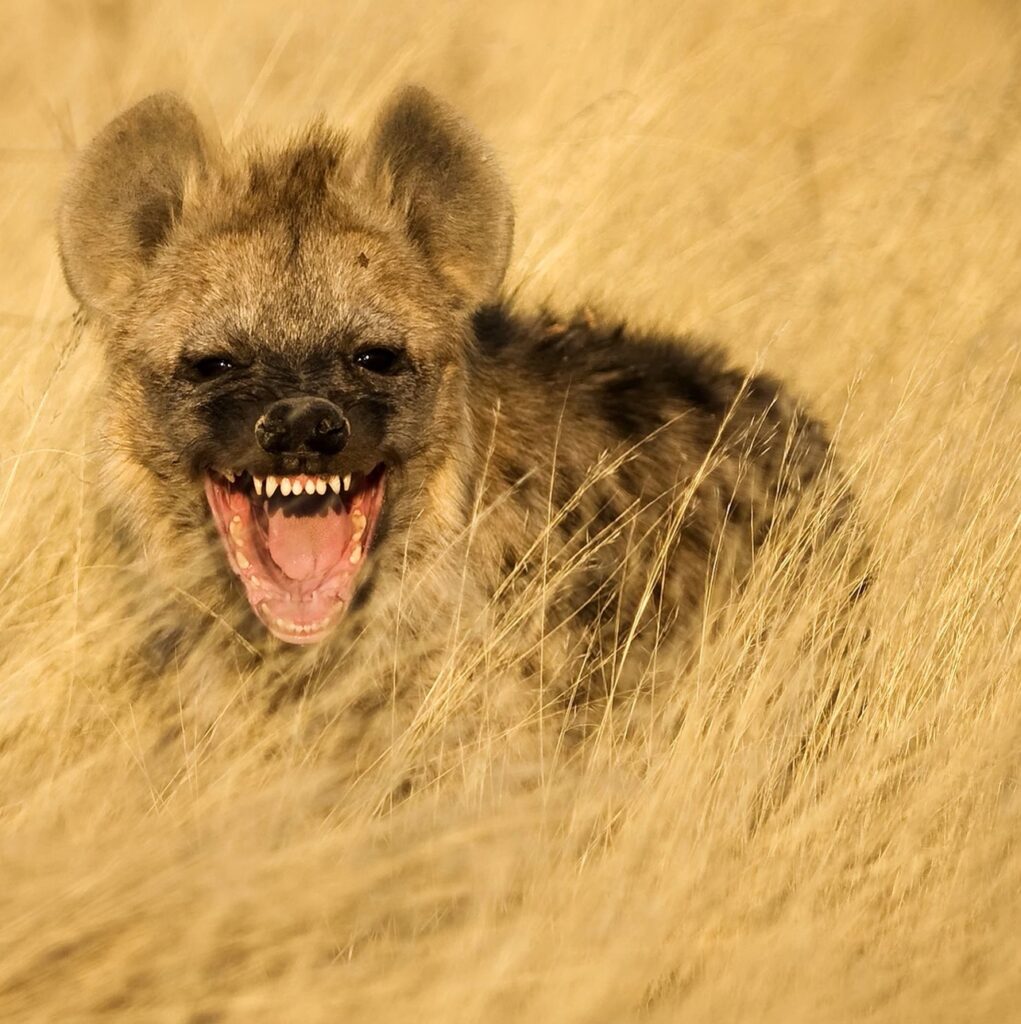 A hyena does its best bat impression, showing off an impressive array of bone-crushing teeth. (Credit: Bridgena Barnard / Rex Features)

Scavenging is also not as risk-free or mindless as it is often portrayed. In the predator-rich plains of Africa, most scavenging opportunities are guarded by other predators, who just got done killing something and aren’t about to give it up. In the case of solitary predators like cheetahs and leopards, this is easily handled. Hyenas simply mob them with superior numbers and drive them away. Against lions, it’s a harder choice. Lions hunt in packs, all of which will work together to guard a meal. The hyenas have to make a decision about whether their numbers are enough to overwhelm the size advantage each individual lion carries, only attacking if their numbers are overwhelming. Lions in general are a hyena’s worst enemy, often attacking solitary hyenas they find in their territory and of course trying to steal their meals just like hyenas steal theirs. As a result, hyenas will do the same, swarming solo lions and chasing them away from their turf. 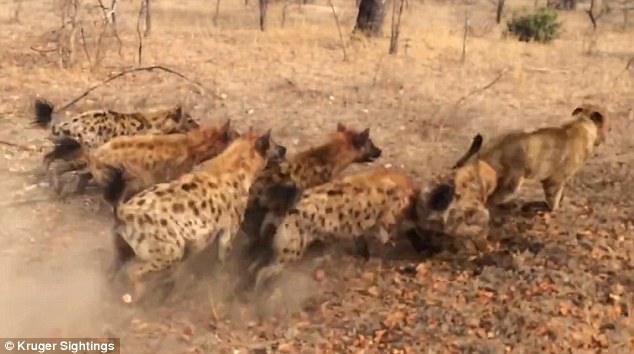 Is this bullying, and if so, why am I rooting for them? (Credit: Kruger Sightings HD)

The calculus hyenas put into their encounters with lions is nothing special. Most animals can make simple decisions based on relative power versus another animal. However, hyenas add another layer to this judgement with their ability to make inferences. When another pack invades their territory, hyenas will listen in on their conversations from afar before making a move. From the number of individual voices they hear, they judge the numbers of their rivals and judge whether to approach.

On top of that, hyenas have clever methods of scavenging. Just relying on your sense of smell can only get you so far sometimes. However, the vultures above have a wide-open view for miles on end. If you’re a hyena, you might think of following vultures to their meals, and congratulations! It works! Not only can hyenas figure out novel means of obtaining food, they can learn those methods from one another. A hyena who finds a new food source will become a temporary teacher, with other hyenas allowing them to lead until they learn their techniques, even if the member is low-ranking otherwise.

So before you call these delightful monsters stupid, mangy poachers, remember that their intelligence matches some of our closest relatives, they get their meals poached by lions just as often as they poach the meals of lions, and, again, they’re just cute (and cool) as hell. 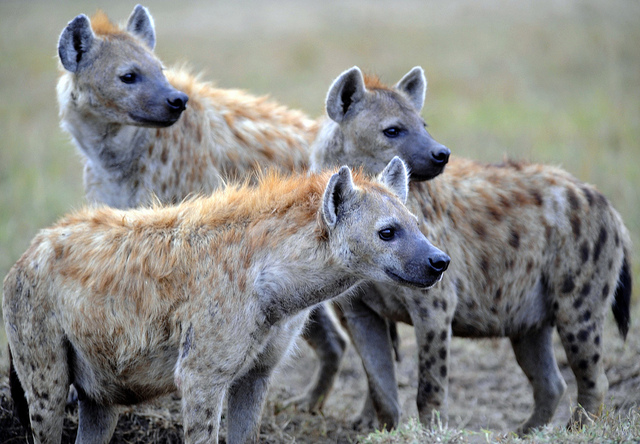