You know what the best part of any series with a whole lot of monsters is? A scene where a whole crazy menagerie of them marches by in the background, each one totally different. Does Hazbin Hotel have a scene like that? Hell yeah! It has multiple! We won’t be covering every single demon to appear in the background, and I’m even leaving out one or two of my favorites out. As even the wiki doesn’t have names for these guys, I will be making up my own, from simple descriptors to whatever dumb thing comes to mind. 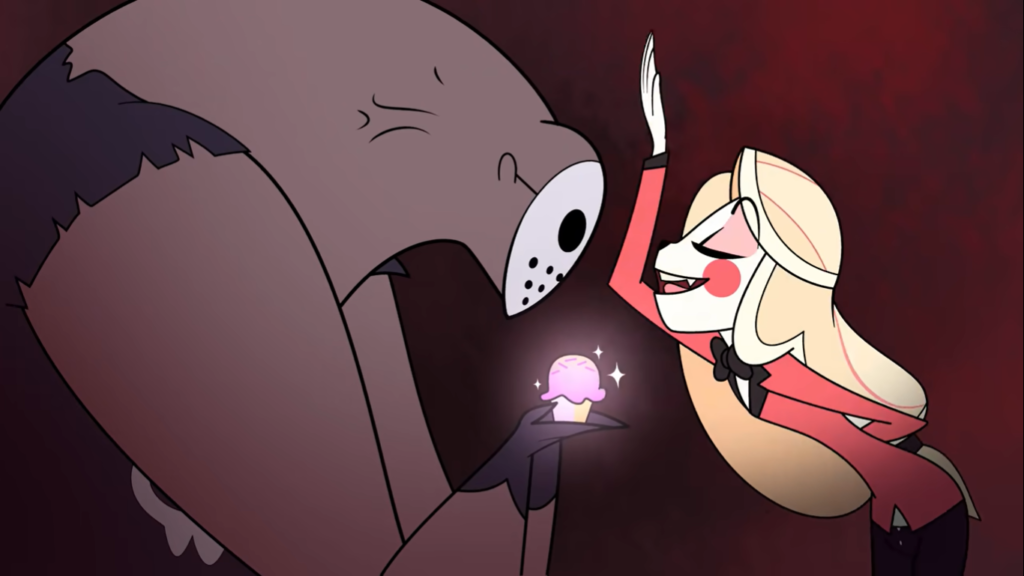 I know this guy.

Oh hey, I never watched any of those Friday the 13th movies, but one of them is about how he went to hell, isn’t it? Here he is! Seems to be doing pretty good, honestly. Really takes well to an environment where everybody is all about slashing people into little bits. Anyway, his design is super charmingly stylized, with a big, top-heavy body and amusingly tiny hands. His mask is weird though. Looks like it’s on frames like glasses. I guess it’s because his head doesn’t attach right for a band to go around his head like it normally would. 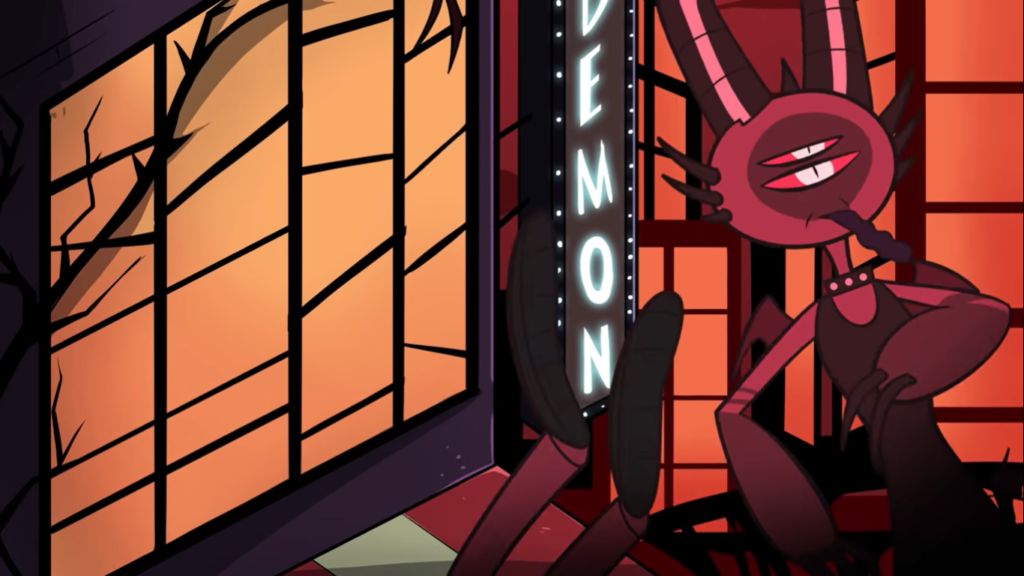 While we see this demon in several other shots, in none of them does she have the wiggly black tongue that I named her for, and that’s an essential detail. It looks like it could extend in and out like an accordion, which is the best thing for a tongue to do, besides a lot of other ridiculous things you can make tongues do. Even without it, she’s charming. I always like stacked body features, like the doubled eyes she has, and her horns nicely frame her round face. I also like her popeye arms. 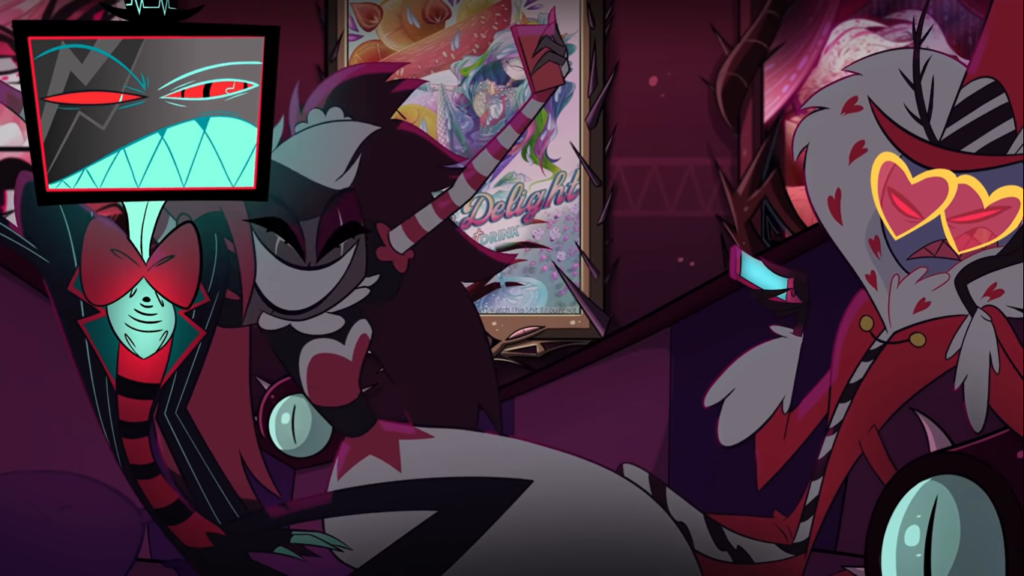 Okay, the two men in this picture are actually named, but only in the wiki. On the left, we have Vox. The woman hugging him isn’t named, but she really just seems to be a grey-skinned maid, and presumably works for the studio Vox is hanging out in. It’s probably fair to say Vox is a younger, shinier guy trying to take Alastor’s place, given that Alastor goes the route of the radio while Vox has a shiny plasma screen tv for a head. His glowing blue teeth are pretty nice.

Valentino is Angel Dust’s boss, and like Angel Dust, he appears to be buglike on some level. Where Angel Dust mimics a spider, Valentino looks more like a moth, with feathery antennae (or branched antlers that resemble them). His furry collar also resembles the fuzz that some moths are famous for. I also like his sunglasses. Heart sunglasses look good on anybody. 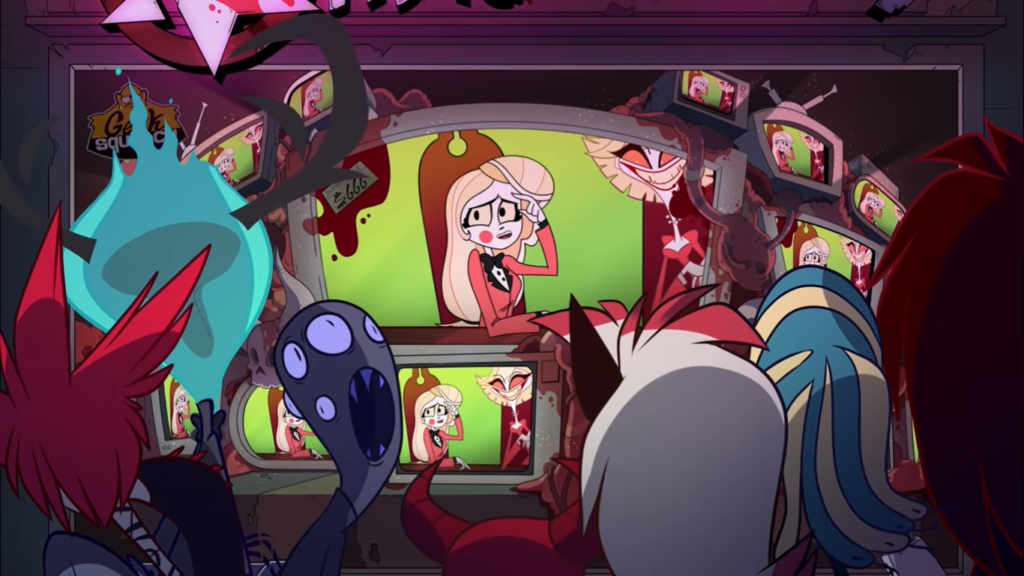 Here we get into the real juicy group shots. The only really interesting one from the back here is the grey-headed guy who has no idea what’s going on. I love those blank eyes and gaping jaws. What a dweeb. But what’s this? We also get a front view? 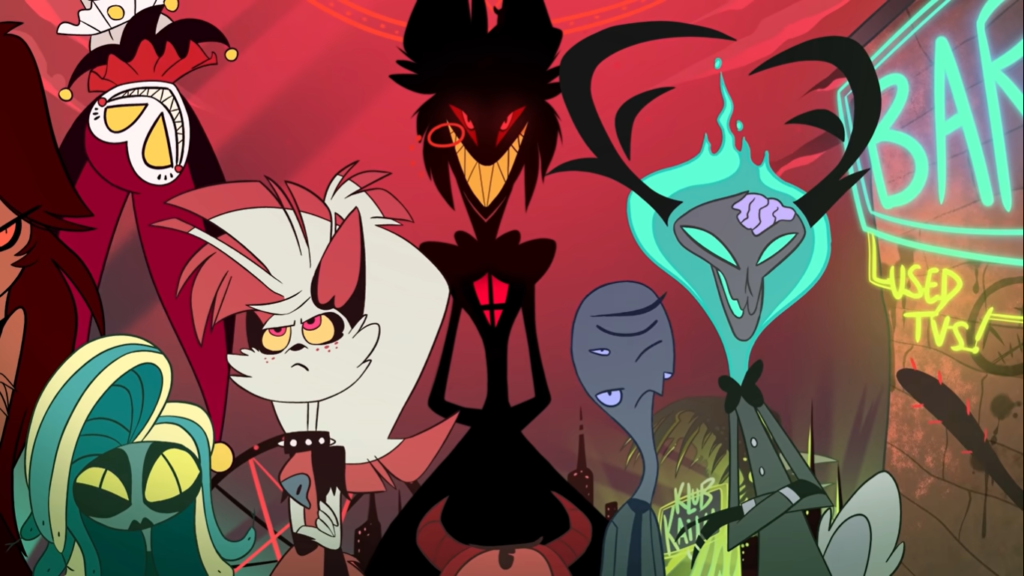 Oh! He’s not clueless! Only his back face is clueless, which is pretty reasonable. He never sees where they’re going, just where they’ve been. His front face is just incredulous and bored, but still adorable, like a lumpy cartoon earthworm. Also notable are the upside down clown and the man with a flaming deer skull for a head. I love the extra touch of his exposed brains.

Also, Alastor is there, using his drama powers to change his lighting and stay in the shadows. 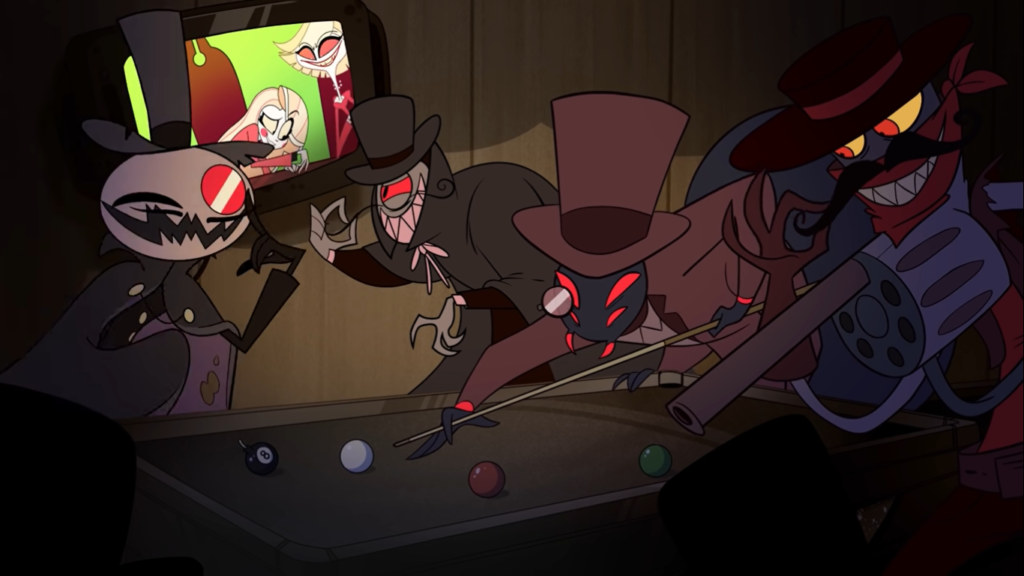 Another shot of a group of onlookers reveals an amazing cast that could be a whole squad of major bad guys in a toyetic 80s show. The guy on left has a mouth that can also read as a jagged mustache, right beneath his actual evil mustache. His asymmetry is also delightful, with one squinty eye and one giant monocle really giving his face personality Right next to him is an even more cartoonishly villainous fellow. His only features are a single evil eye, an evil mustache, and an evil smile. That’s a pretty incredible concentration of evil in one Dick Dastardly, I must say.

The spider is the simplest here, and I’m afraid I don’t like them as much as the more stylized Angel Dust types. This  just IS a spider. Angel Dust vaguely looks like a spider. Luckily, the last one makes up for their shortcomings. I can’t handle how great this gun-torsoed goofball is. What can I even say? I guess I can add that his evil grin is actually painted on his bandanna, a feature ya’ll probably missed at first, just like I did until writing this article and staring really closely at him. 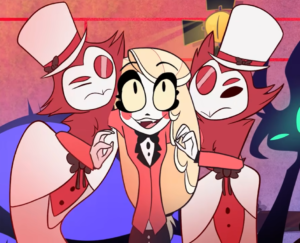 These two only show up briefly, but they leave a big impact. I love their mask-like faces, and their matching asymmetry makes it even better. Their apparent lack of arms is pretty interesting as well. Are they the natural end point of ferrets, which as we all know are mammalian snakes? Well no, they’re demons. But I like the idea. 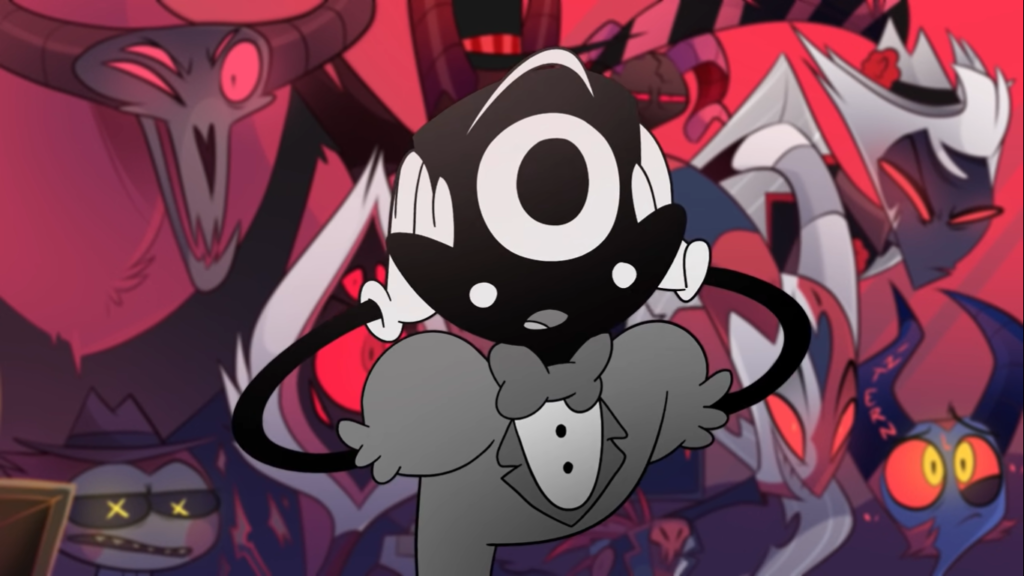 I love this fleischer-era goofball. His greyscale stands out in the vibrant world around him, but mostly I appreciate his commitment to the look. Not only does he have the classic gloves, his head is shaped like a top hat, a charming old-timey feature that fits the time period his style hails from. 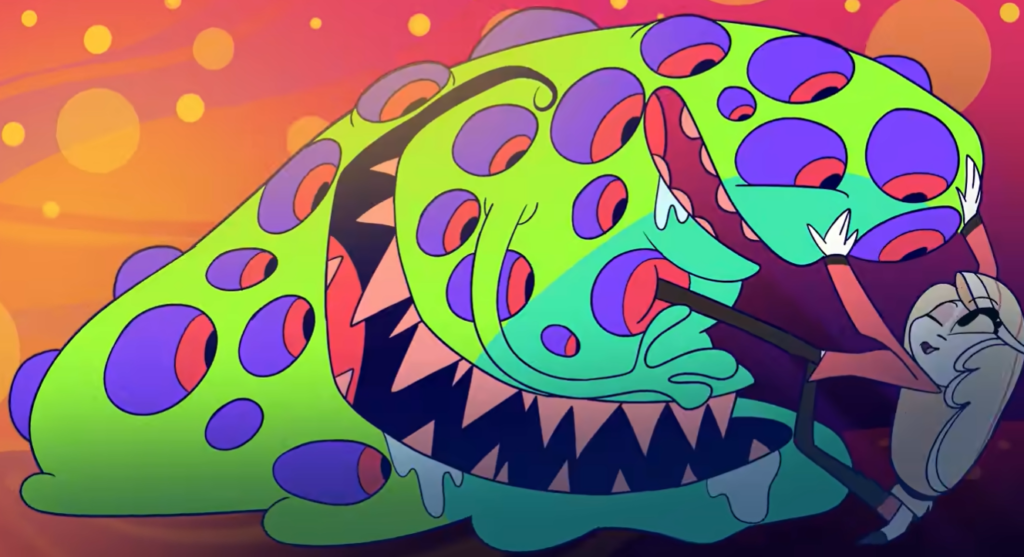 What was it I said about stacked features? Having a mouth atop its mouth really makes Joe stand out as blob monsters go. They work well with the massive cluster of eyes all over their body. They’re such nicely different mouths too, one with blunt, tombstone shaped teeth, the other a massive, exaggerated gash through their entire body. 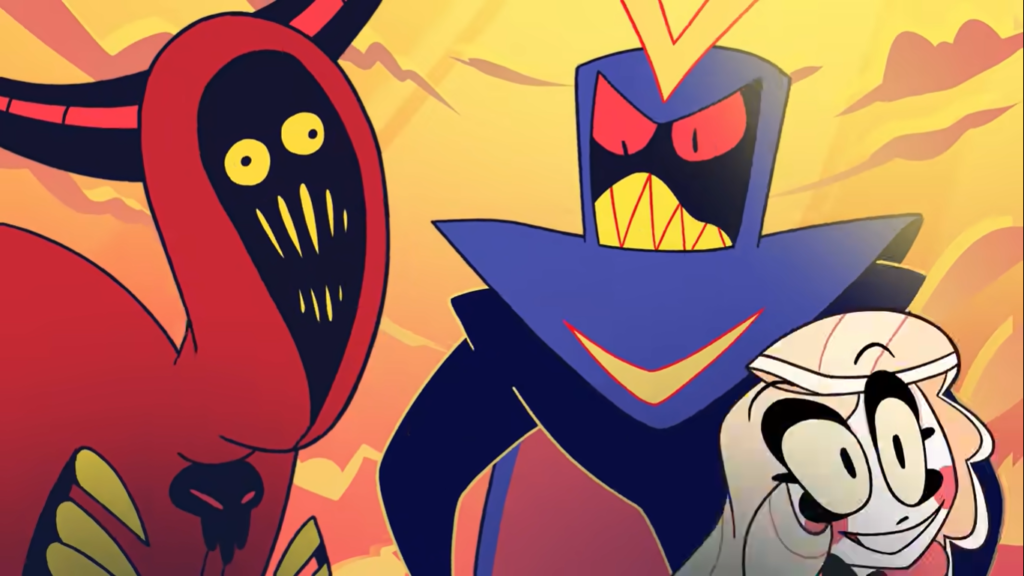 Oh my god the guy on the left. I love those big dumb eyes looking different directions, those little peg teeth, and the way his body looks hooded without necessarily being clothed at all. Captain Crash, the blue one, isn’t as amazing, but he’s still pretty neat. I like his simplified head shape and stark outline. Even more than Devilman, he kinda looks like he was drawn by a child, which is totally a compliment. 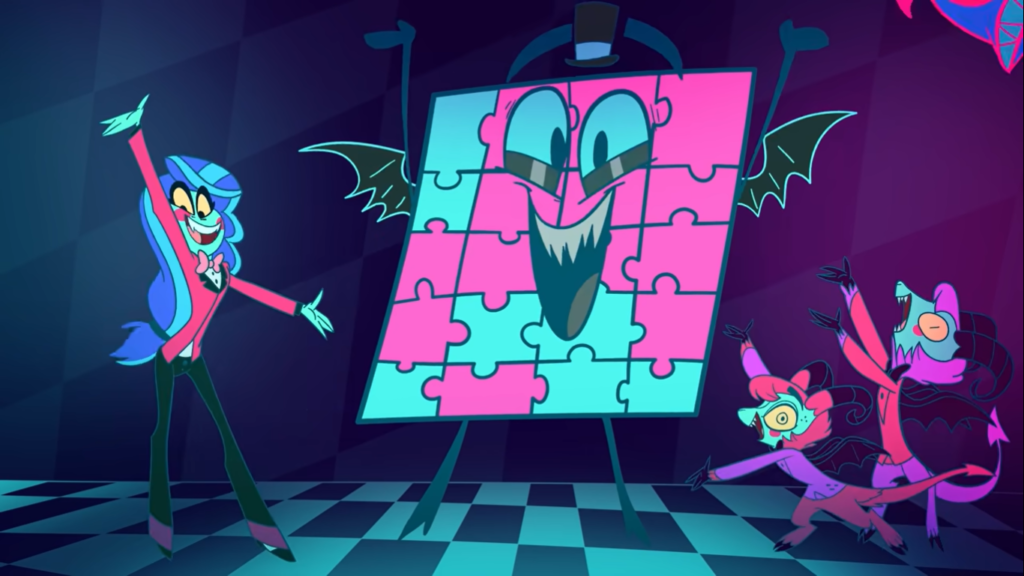 I’m split between this and Joe as my favorite of the demons featured in the episode. Joe is lovable in execution, but Perry here is SO much weirder in concept. What are even the rules here? How does he function, made out of puzzle pieces? No other demon we see seems so thoroughly inorganic. My only complaint with Perry, and what might put Joe above them, is that both their eyes match only one color of puzzle piece. Either one should be pink or neither should be the same colors as his body.

This leads to the end, where I have to say, I’m pretty happy with this selection. Mixed among many more average specimens of demonkind are several absolutely gorgeous monstrocities, all brought to life with some top-notch animation. My only complaint, really, is to my personal taste. Since demons are the souls of sinners being punished, I wouldn’t expect so many to be hale, hearty, and attractive. I would be delighted to be nearly any of these demons. However, one does fit my “punishment body” aesthetic, and I’ll be closing out with them today. 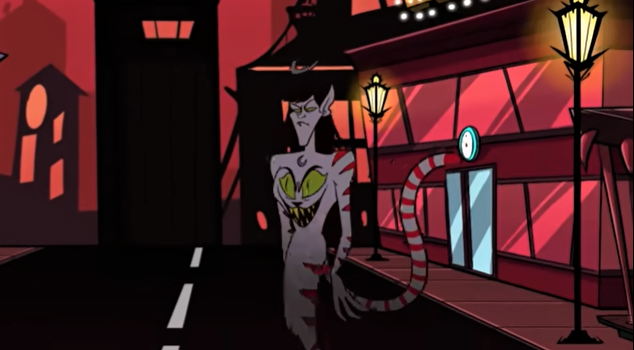 Oh my god. What did this guy do to deserve this? He must have been the WORST.