Ah, Dungeons and Dragons. Never have I played it, but long have I admired the vast array of imaginative monsters that decorate its dungeons, of which there are presumably a lot because it’s named after them. My favorite thing about Dungeons and Dragons is that because of its vast multiverse of editions and settings, there’s multiple different versions of nearly every monster, with various subtle differences. Of course, this feature, while Dungeons and Dragons’ biggest draw to me, also made it really hard for me to decide where to start. Weird dragon relatives? Goblins? Fiends of some sort (yugoloths for life, suck it demons and devils)? Or abberations, those seem right up my alley, don’t they?

Well, I decided to pick none of these. I’m not sticking with any proper category of D&D monster, but one of my own choosing, due to something I noticed by sheer accident while browsing creatures; D&D has a lot of frogs. Not only does it have a lot of frogs, frogs are woven into the fabric of the universe. There are mortal frogs of flesh and blood, but also frogs from space and even frogs from beyond the material plane. Extradimensional frogs exist. From MULTIPLE dimensions! In the D&D multiverse, the bipedal frog is the perfect shape, chanced upon by life form after unrelated life form. 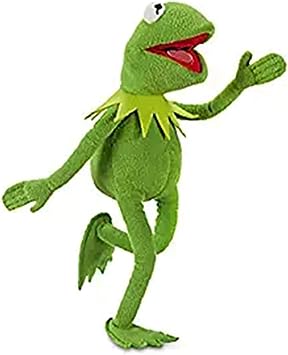 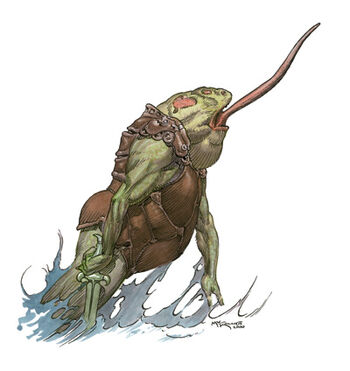 Let’s start off with the most simplistic of the group. An everyday, ordinary humanoid toad. Bullywugs aren’t especially complex, basically an amphibious, frog-themed version of the neutral and chaotic evil (bullywugs have been considered both in their publication history) low-level races that adventurers are expected to slaughter in large numbers. Now, I won’t get into the implications of all-evil races or my thoughts on them in detail here (in short, creepy, and I tend to find them boring at best). There’s gonna be a lot of them, so we’ll just take each creature alone.

Anyway, the bullywug is fine, if pretty standard for a frog person. This is personally my favorite picture of a bullywug anatomy wise. It really captures their froggyness, and just how inhuman that really makes their bodies. I really love that slightly weird arm and oversized head, even if the tongue isn’t really realistic for a frog. Culture wise, they’re pretty simplistic, much like other generic evil races. Territorial, violent, like worshiping really evil gods for reasons that are beyond me when gods are objectively real and objectively good or evil. 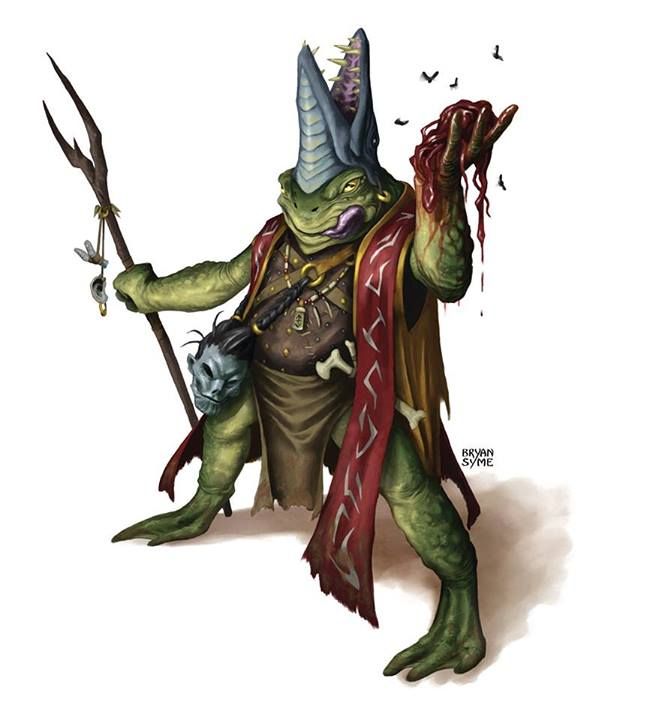 Pathfinder is a different tabletop game heavily based on Dungeons and Dragons, which shares a lot of creatures and ideas with minor changes, allowed under the Open Gaming License, which let people make things based on Dungeons and Dragons within certain constraints. Bullywugs were not included in this, so Pathfinder renamed them Boggards. I love their faces. More warts, BEAUTIFUL buggy eyes, and charming fangs. Actual frogs almost never have visible teeth, but I like their appearance here more for that.

They also get a few interesting lore tweaks. While a lot of Pathfinder monsters are made much more unpleasant than their D&D counterparts, boggards are less evil than bullywugs in one way. Bullywugs are notoriously hard on their environments, destroying them with their ravenous appetites, but boggards care for their homelands, enjoying natural elements like glowing moss and such.

Grung are a poison dart frog to a bullywug’s basic toad, and the result is quite excellent. Like any good small gobliny creature, they are simultaenously cute and extremely creepy. The yellow grung on the left is just horrifying with that color pattern and too-human mouth. Like bullywugs, grung are evil, although being lawful evil, they’re more the “conquer and enslave” than “ravage and destroy” types. As is common among lawful evil creatures, they are also heavily hierarchical, with each color having a different rank and poison.

A green grung, the lowest rank, has paralyzing poison, red grungs cause their victims to become insatiably hungry, and the elite yellow grung cause those they poison to become terrified of their own teammates. These all help them kidnap people to work as their slaves, who they weaken with poison to prevent them from uprising which… seems like it kinda ruins the point of slaves, doesn’t it? If they’re too weak to revolt they’re probably too weak to work. Stupid frogs. This is why you didn’t show up for four and a half editions after your introduction.

Non-evil froggy folk! Huzzah! This is art from Pathfinder, but it’s basically identical to how they’re portrayed in D&D, just higher quality because they don’t tend to show up much these days. Where the bullywugs are toads and the grung are poison dart frogs, grippli are tree frogs. While they’re my least favorite of the frogfolk design wise, they’re still pretty slick. I love how big those eyes are on that skinny little body.

Despite being considered neutral, it’s actually surprisingly easy to get into a fight with grippli. They are paranoid of outsiders, which is understandable when you’re two and a half feet tall and your closest neighbors tend to be bullywugs, lizardfolk, and other voracious carnivores. They are also prone to working for evil masters, as if they are enslaved, they will quietly submit rather than rebel. I feel bad for them. Sweet little frogs did not ask for this.

Weirdly, in first edition, despite their extremely precarious lifestyles, they could live as many as 700 years, which is nearly as long as elves. Small prey animals like this usually don’t live very long, but you know what? Live long and prosper, little guys, you deserve some perks. 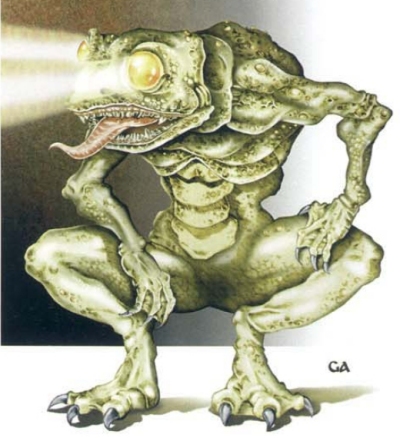 Extra cute frog monsters! I love the blindheim’s look. That pale grey-green, those giant, glowing eyes, the more gill-man like structure of the body, they all communicate their cave-dwelling nature. The blindheim, unlike the grung and bullywug, is not evil, just a hungry monster. They fight by blinding foes with their glowing spotlight eyes, then attacking with claws and teeth. Very simplistic and very cool. While a light attack wouldn’t make much sense in the caves of our world, most underground creatures in D&D have the magical ability to see in total darkness. 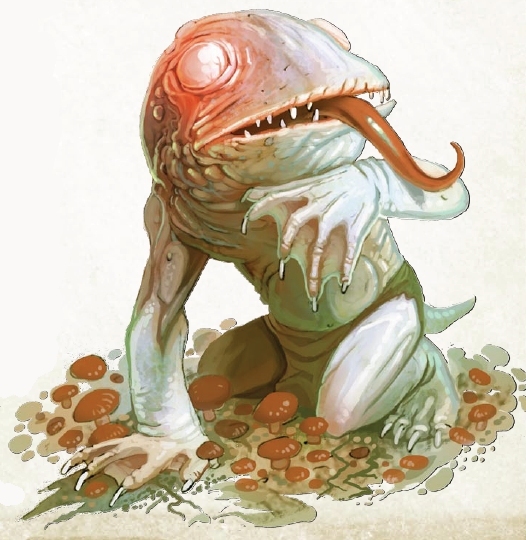 Again, the Pathfinder variant is quite different. I don’t want to repeat Bogleech’s article on the Blindheim too much, but most of what he found interesting about it I agree with. It’s more of a newt than a frog and the loincloth suggests it’s a bit more intelligent than D&D’s version of the creature. Unfortunately, I can’t seem to find anything else about the things because I don’t actually own any monster manuals to draw from. 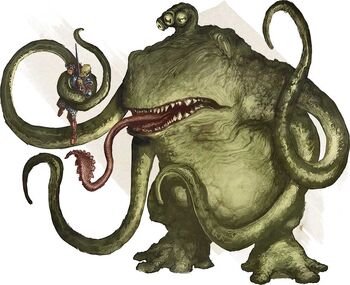 The last of our creatures from the prime material plane, Froghemoths are the most alien ones we’re going to get without leaving the bounds of the regular universe, as they are, in fact, actual aliens, found near a crashed spaceship! I find them rather delightful, kind of a frog-themed, tentacled rancor. I especially like the details of the tongue and eyes. The tongue has a rather neat “club” like a squid’s on the end, suggesting suckers. It’s a cool extension of the classic “frog tongue”, even if that’s not totally accurate to frogs. 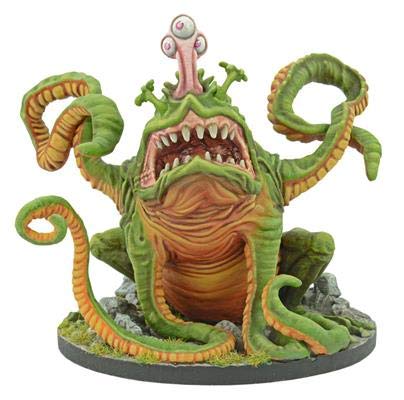 I also like the very different direction this figure goes. The tentacles look almost like worms and are beautifully sculpted in general, and its head is hilariously terrifying. This really does capture the term “froghemoth” a little closer with its more froggy pose.

That’s it for the frogs of the prime material plane! Next time, I’ll be looking at extraplanar frogs, with an explanation of how planes work in D&D and how I’m a touch disappointed with how that worked out for extraplanar beings.