The prime material plane contains the universe as we know it, an expanse of stars and planets. It’s more magical than the world we know, but things are still mostly made out of the same matter and energy and everything we’re used to. There are “reflections” of the prime material plane like the shadowfell and feywild, there are the elemental planes (classic elemental planes, not planes like “carbon” and “hydrogen”, as cool as that would be) and then there’s the ones we’re interested in and by far the weirdest when you think about them.

Usually, these are called outer planes, and each of them is a universe unto themselves dedicated to a single alignment. You’ve probably seen some version of this drifting around in your internet travels, and let’s be honest, if you clicked on a D&D article, you know what this is all about. What you might not know is that not only is morality objective, the multiverse is structured to reflect it. There’s a plane for every alignment and a few more planes in the middle to represent nuance, as much as you can have nuance in a world where morality is objective and being born as the wrong species can doom you to one brand of morality. This is important, because our last three frogs are the ultimate embodiments of their respective alignments. Further proof that frogs are the pinnacle of design in D&D! 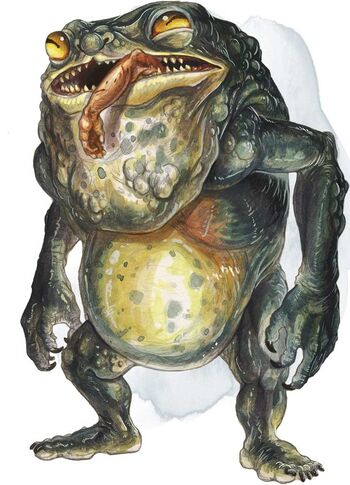 Before getting to the outer planes frogs, let’s talk about the Plane of Shadow, or Shadowfell as it is sometimes called due to story reasons in those books with the dark elf with two swords. You know, before that was all dark elves. The Shadowfell is one of the closest planes to the material plane, and is kind of just a really crummy reflection of regular reality. The water is viscous and smelly, all the food bleeds, and you can never get warm. Honestly, if it meant no sunburns (there’s no sun there, given it’s the world of shadows), I think I could put up with that.

Anyway, while most of the time the Shadowfell is just kinda dreary and depressing, just like the regular world, there’s plenty of horrible stuff, and banderhobbs are some of the most horrible of all. I love that thing. Look how big it is compared to that guy’s arm! It must be so damn big! Surprisingly, this is the only frog monster to really emphasize the throat sack most frogs actually have, and it does a delightful job of it. I love that warty, sagging skin.

In personality, they’re basically assassin/kidnapper Mr. Meeseeks. Yes, yes, look at me. They are summoned by combining flesh and darkness and sent after a target, which they invariably swallow whole, which is something else delightfully froggy about them. Frogs basically eat anything they think will fit in their mouth. Sometimes they just digest their victims, but they also can hold them in a pocket dimension inside themselves and spit them out later. After completing their task, they dissolve back into shadows. I admit I’m a fan of that alien mindset. Do your job, vanish, that’s okay. It’s weird enough it’s pretty creepy on its own even without a great design. Doesn’t even have to be evil! Banderhobbs are just real professional! I’m a little torn on if I like the banderhobb’s original design more or less than the 5th edition redraw. You might notice it’s even bigger than the modern one’s implied to be, which is certainly nice, and also, it’s fuzzy, which is weird as hell and nice for monsters. I always like monsters with that fine fuzz. It’s also much uncannier. Most of these monsters I just find cute or cool, but adding a little more human really does make something unwholesome. We lose a lot of the more explicitly froggy features though, and that’s hard to forgive. Call it a tie? 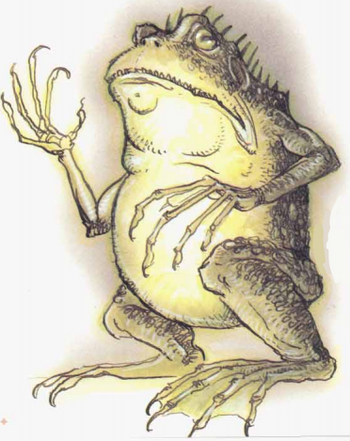 Hezrou are demons, which means in D&D terms that they’re the ultimate expression of chaotic evil. Chaotic evil basically means you are not just evil, you actively dislike law and authority. That cat that takes a whack at your head every time you walk under the staircase he sleeps on is chaotic evil, full of spite and incapable of following orders.

On the subject of the hezrou itself, they’re an extremely basic monster in personality, just a standard ruthless, violent bully like most demons, although for demons, they’re actually pretty chill, capable of making long-term deals for people’s souls and actually following through on their end. That’s remarkably capable planning for a demon cast as a dumb brute.

The more interesting thing about the Hezrou, however, is despite consistently being described as toad-like, the Hezrou is very malleable between editions, and my favorite versions aren’t actually toad-like at all. The one above is from second edition, and honestly, it’s charming, and I really do love the art style, but it’s not very impressive. Not very different from any other humanoid toad you could find on the material plane. 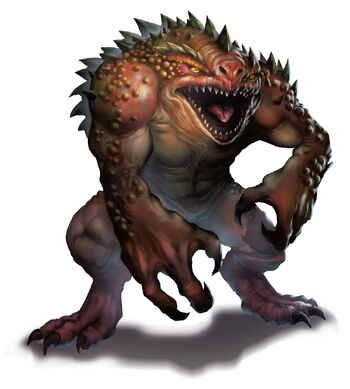 This one just looks too much like a slaad to me (we’ll get to them), and is a bit generic overall. A big spiky thing is all well and good, but it feels a little aimless. There’s no real focus to the design, it’s just a lot of spiky meanness. 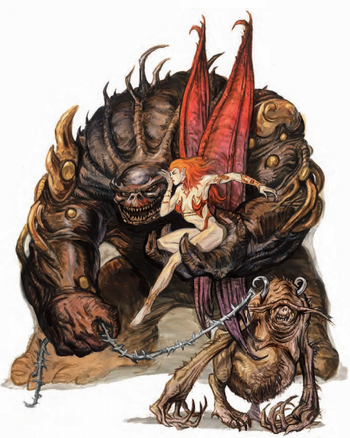 3rd edition’s hezrou is actually my favorite, despite being the least frog-like of them all. I just really like that tiny, rounded scowling little head set in its enormous ape-body. It looks a lot more clever than most versions, like it’s actually really taking into account the information that succubi is telling him. Or they’re just dating and she REALLY likes the plans the other one’s telling her. The Pathfinder version probably does the best version at communicating the personality of the Hezrou while actually including toad features. It’s kind of hilarious, seeing a nearly-normal frog face slapped onto that slab of meat it calls a body, but in a way where I can see it looking like a regular giant frog hanging out in the water, only to reveal that it’s been hanging out on muscle beach when it comes ashore. 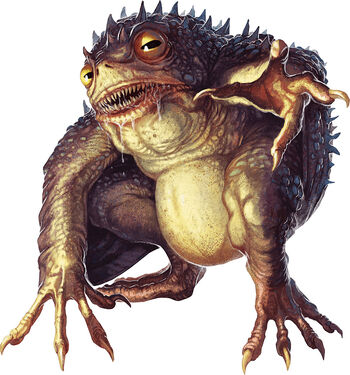 Awwwww yeah, yugoloths. Yugoloths are the neutral evil equivalent to the demons, coming in their own vast array of forms. Neutral evil is that coworker who steals your lunch. They don’t give a damn about anybody but themselves, and they don’t particularly care about the rules either way. They’ll follow them if they benefit them and ditch them if they don’t.

Weirdly, despite not being the chaotic ones, the yugoloths tend to have a lot more varied, alien forms than demons. The hydroloth is one of their less weird members, but they’re still absurd and great. The froggy aspects are mostly great. It’s got those great big luminous eyes that frogs really sport. They’ve got great toady texturing, that dry, pebbled, warty look that makes cane toads in particular so delightful. This would be a solid toad if it were just a toad, but no, this toad, you might notice, has a cape. That’s actually a membrane between its front and back legs. They use it to glide. Yes, they’re flying frogs. 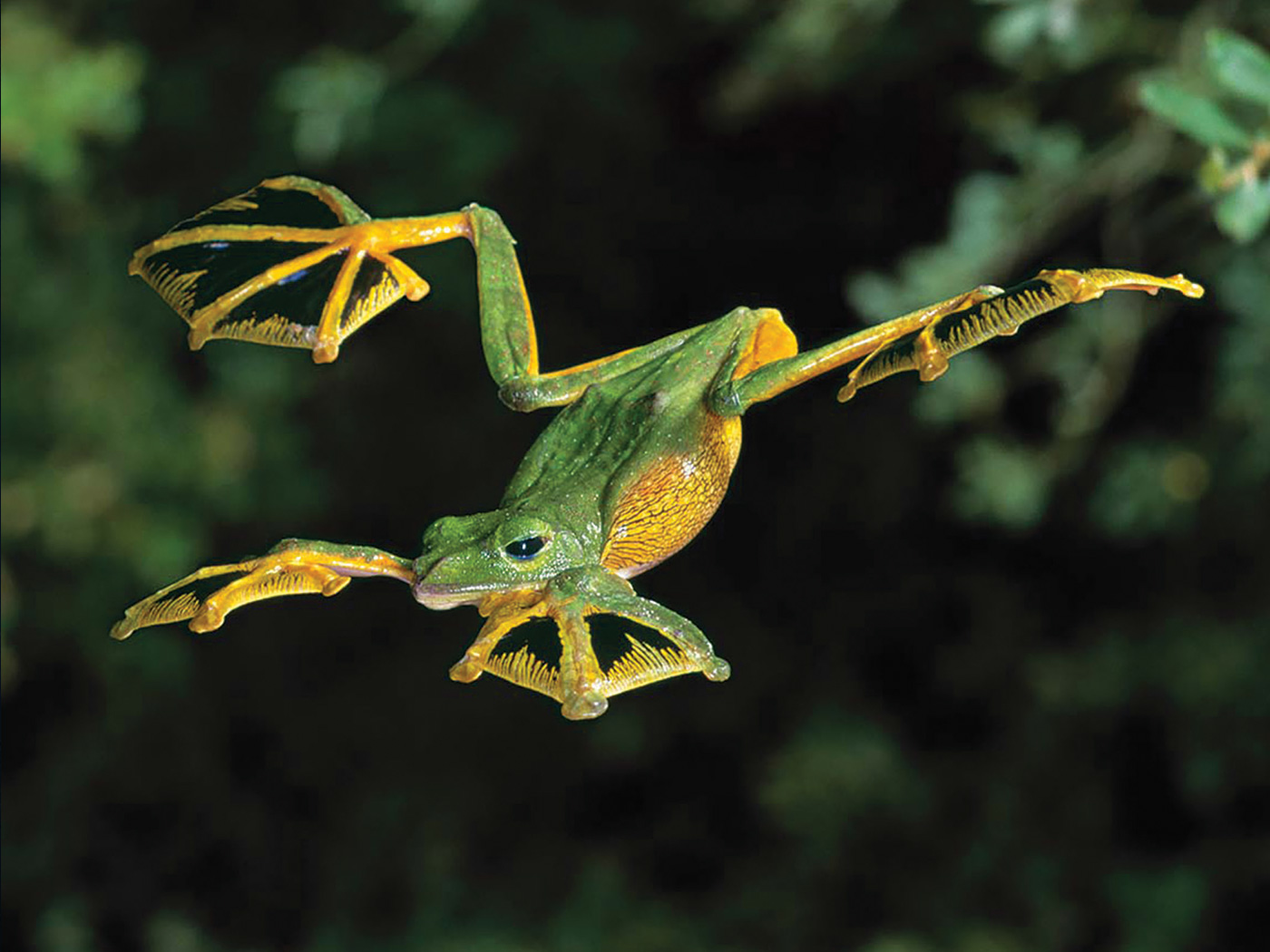 Yes, there’s actual frogs who do this and they are hilarious, but how much funnier is it to imagine this fat toad just taking off and floating around in the air? Graceful. Amazing. Beautiful. I want this animated.

They’ve got a fun twist on their lore too. Yugoloths are portrayed first and foremost as mercenaries, doing anything and everything for profit. Hydroloths do fight in the same wars as their brethren, and gladly so, but on the side, they are information brokers. They are experts at this because of their ability to rip the memories right out of a chosen target, leaving them an empty shell unless they are recovered via magic. As a bonus, they are immune to the waters of the River Styx that they call their home, which are also capable of draining memory. 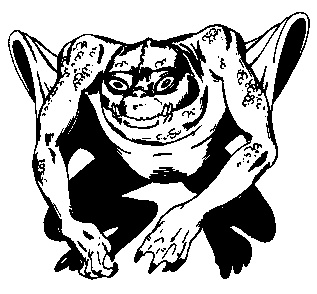 I don’t have a whole lot to say about this first edition art of the hydroloth, it’s just real funny. Look at him. Pat his head. Aw. 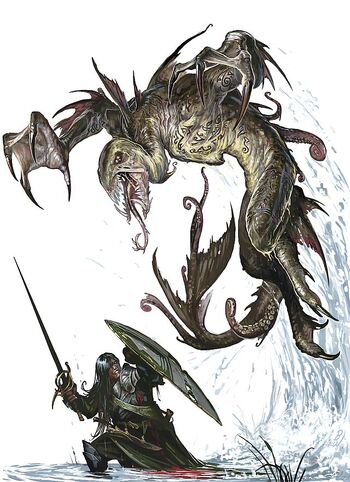 4th edition tended to be the one that went the most for pure heavy metal coolness in its art, and yeah, you can see it here. This isn’t a frog at all. It doesn’t even have its gliding membranes. Is this thing even meant to be a hydroloth at all? Well, I don’t like it as much as a proper hydroloth, but it is still okay under all the generic snarlyness. The mouth is nicely beaky and paired with the neck, gives me a real vulture vibe. I like vultures a lot. I find the symbols etched into its skin interesting I guess, and it’s also growing tentacles out of its body! Which is fun! I like to imagine this is a female hydroloth and those tentacles are the males, like it’s an anglerfish.

…how do yugoloths reproduce, anyway? They supposedly advance through ranks of transformation like devils do, but then some of them are described as having children that are apparently their own type. Weird. 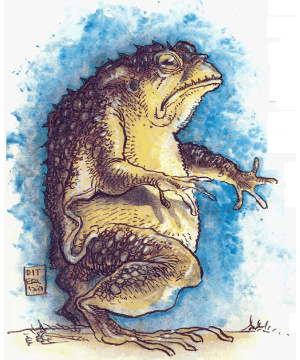 Unfortunately, it’s 2nd edition where we really start to get into my issue with a lot of this extradimensional stuff. Yugoloths and demons aren’t even from the same universe, so why does this hydroloth look exactly like a hezrou? There’s no real consistent style to any of the main groups, making them kinda flow together if you don’t know all of them individually. It’s just weird that a manifestation of neutral evil can be mistaken for a manifestation of chaotic evil, given they’re actual objective positions in the D&D universe. 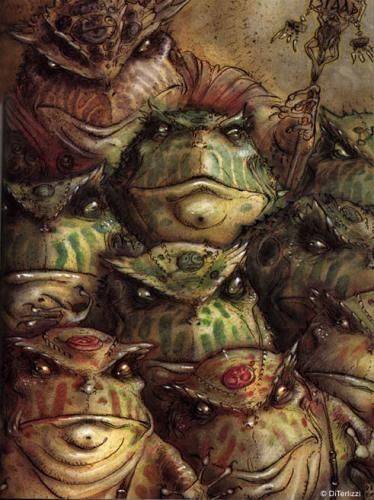 Screw it, the slaadi are getting their own post. They’re too complex for an article that’s already long!

Yes, they look too much like the other two extraplanars here, but I love this Labyrinth look they’ve got going on, so it’s forgiven this time. I’ll explain more next time!

Credit for all images goes to the Pathfinder and Forgotten Realms wikis.