So a few months ago, I was in [REGION REDACTED] for [TASK REDACTED]. I decided to check out the local Fred Meyer because I hadn’t been to one in years and wanted to see if it was like I remembered. A lot of it was (although I swear the Starbucks upstairs was new) but perusing the toy aisle (my sister’s idea, I swear), I noticed something I had never seen before. A strange little block. 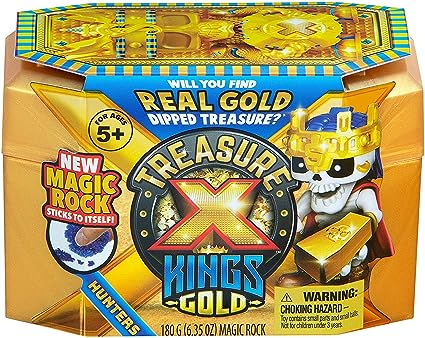 It’s another series of what are effectively real world lootboxes. You buy a package and you don’t know what exact toy you’ll find inside. I was tempted, but I didn’t pick any up. I don’t like risk and unpredictability in my purchases. If I buy something, I want to know what it is. But I was tempted for a reason, adorable monster designs catching my eye. 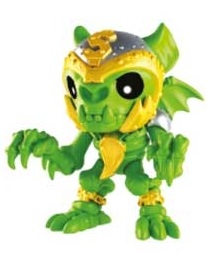 I fell in love with this little guy the moment I saw him. Originally, I labeled him a grindylow (an aquatic goblin, obviously) but upon finding a better picture of him, I quickly realized he was instead even better; something weird and original! I love that he’s a green skeleton with a weird canine skull, and his cute little wings are adorable. And his hat! He likes money! And that’s when I started doing my researched and started finding more that delighted me. Mixed in among the samey skeletons… there really is some gold. 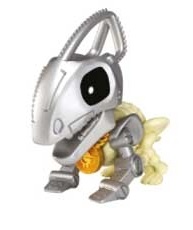 These guys do have official names, but their wiki is so incomplete that I can’t match most of them to their names. So enjoy my own stupid names. Anyway! I love this guy! A stubby little pug skeleton with a robot chameleon head. That’s wacky! I’d pet him, but that little metal beak looks like it would clip fingers off with ease. Just like the grindylow turned out to be both a skeleton and a chimera (bat wings, canine skull on his humanoid body), Necrotech is a cyborg and a chimera, and the mere addition of a second element makes monsters so much more complex. 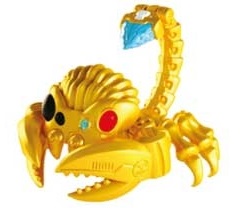 Goldbug here is another seeming cyborg or even a whole robot shaped like a scorpion. Clearly not an actual scorpion though; she’s missing two legs! I love her face, with a “mask” part like an upside down controller and a strangely textured head, like she’s got cornrows. Maybe she does. The diamond stinger is also pretty clever. Goldbug is really the perfect series mascot in my mind. What better for a series where you dig up monsters and treasure than a guardian monster made OUT of treasure? 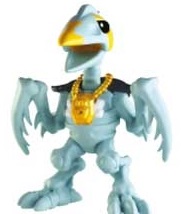 Here you can see that a lot of parts are used in multiple monsters, in particular that skeleton body and legs. What differentiates mantibuzz here is its head and arms. While the arms are clearly made to vaguely represent a bird’s wing bones, they end up looking a lot more like the cartoon portrayal of mantis arms. That’s horrifying. Mantibuzz will grab you with his horrible skelearms and plunge his beak into your neck. Or just give people very uncomfortable hugs. That seems more likely. 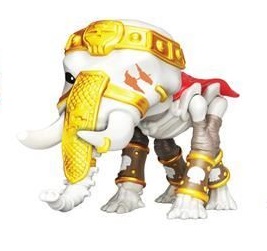 Heck yeah. I skipped a couple other skeleton beasts that were just “cool”, but Mammolord here stood out to me. She’s not just a neat skeletal mammoth with neat gold elements and a cape, she’s got an IMMENSELY awesome skele-trunk. An elephant nose obviously doesn’t work with that, leaving us to wonder what’s up with Mammolord. Was that a perk of becoming a mammolich? Or did she steal a spine from another skeleton? Either way, that’s just awesome. 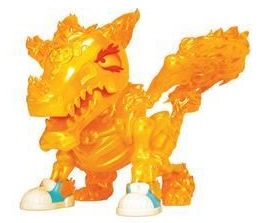 He has sneakers on his hands.

That’s all I got. 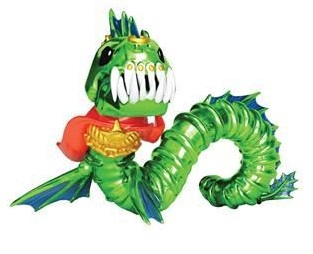 Eelqueen is clearly based on a viperfish, the well known abyssal fish with teeth way too big for their mouths. Unlike them, she has a gorgeous metallic green sheen to her. I also love the ridges around her body. They really add some nice complexity to a very simple body plan. Eelqueen is obviously a rival to Mammolord, but an ineffectual one because Mammolord can’t swim (elephants can but skeletons can’t) and Eelqueen can only barely shuffle around on land. 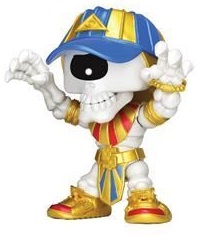 I love cyclops monsters, and the fact he’s an Egyptian, a skeleton, and wearing golden sneakers is all amazing. That’s a hell of a combo, and that continues to be the most entertaining thing about this line. There’s so many weird combinations of monsters! DJ Staredown here is clearly a DJ. Look at him doing the DJ pose. He only plays Monster Mash and Walk like an Egyptian. 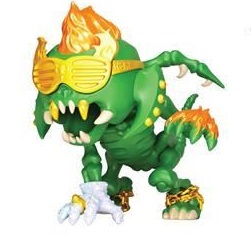 It’s amazing how much minor details can matter. Overall, Bugsta (she’s Staredown’s partner) is just a big devilish skeleton with some insect features. Neat, but nothing worth writing home about. But slap some shutter shades on her and she’s got personality. I especially love the little flames on the corner. Sure, she’ll bite your head off, but she’s also a cool party girl. 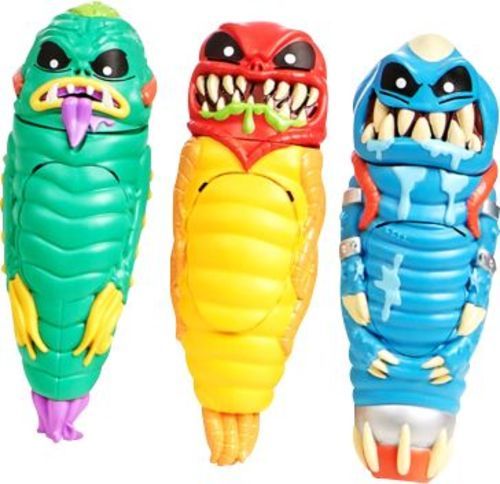 In hindsight the green one is best. Look at her. She hates it. 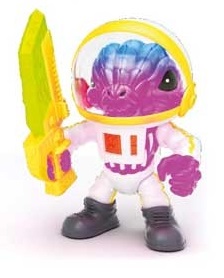 Rexorp here is pretty simple, but I like him. The stumpy proportions of all of them are great, and I thing Rexorp does particularly well with them. I love that big, wrinkly, scaly skull of his, and that really violent purple is lovely. He probably chose that himself, since he looks like one of those reptilians that’s always messing with humanity. 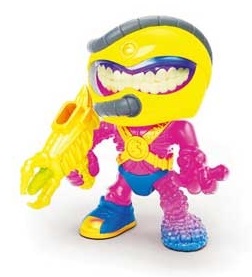 While Rexorp is pretty simple despite being cool, Lips is straight up freaky. I love that helmet, only showing a massive gaping grin. That’s an awesome design feature. Weirder though is that one bare leg. Looks like it’s made of goo. Lips is clearly some sort of jelly being who’s slapped herself into a speedo and a helmet. What is wrong with her. 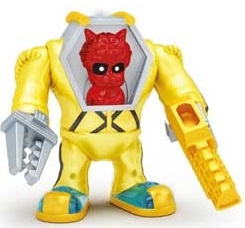 So, uh, I saved this one for last because it’s so special. Let’s not mince words, this is a devil fetus in a power loader.

I’m so happy I live in a world where Embrybot can exist. His robot isn’t the most interesting, although I do like how golden it is. Embrybot himself is lovely. I love that exposed brain with those horns sticking out, and what appears to be a total lack of mouth. Embrybot while telepathically taunt you while his robot stomps around. Assuming actual fetus size, that robot is maybe a foot tall. He’s not scary. I love him. And I’m thrilled that a toyline can just make something like him and not cause an uproar anymore.