So when we last left earth off, we were just 5 million years in the future. That may sound like a long time, but 5 million years is nothing in evolutionary time. The most realistic animals last time were very similar to their current forms. This part will offer up more creative freedom, and with it, more bizarre creatures. First up is the second time period, 100 million years in the future. The ice age is long past, replaced by a hothouse earth, littered with warm swamps, shallow seas, and comfortably steamy mountains. Let’s plunge in, shall we? 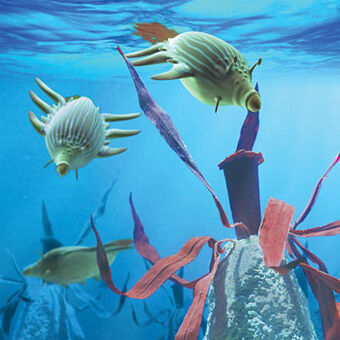 In the new, shallow seas of the distant future, coral has gone extinct. This… is the most realistic thing in the series. I’m sad now.

Luckily, we get new reefs, formed from red algae! These reefs are patrolled by the reef gliders, fat little blimp shaped swimming sea slugs. Blimp is a good shape for anything, and these guys are great. I love everything about them, from their funny little beaks and tiny eye stalks to their alternating paddles down their side. I ripped these guys off particularly hard as a kid, drawing stuff just like them all the time. They always felt like one of the more iconic creatures, despite barely appearing in the promotional material compared to the more striking designs.

They are also interesting ecologically. As juveniles, they are pollinators of a sort, feeding on the “flowers” of the algae reef. as adults, they grow much larger and become predators. The only thing we see them eating is an ocean phantom, but presumably there are other targets on their menu. What’s an ocean phantom, you ask? 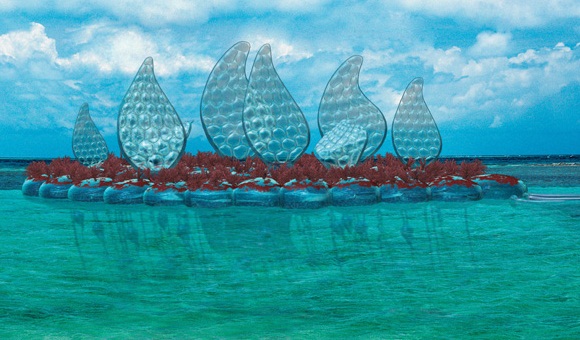 A descendant of the Portuguese Man O’ War, an ocean phantom is not one organism, but a conglomeration of many, just like their modern relatives. Some of them form the sails it uses to steer, some of them the air sacks it floats on, others hold tentacles for feeding. This is one that’s hard for me to judge. On the one hand, I really do love just how abstract this creature is. It’s one of the strangest, most alien organisms in the whole program, something I can really appreciate. On the other hand, there’s just not a lot of personality for me to fall in love with. It’s a bit sterile, almost mechanical looking in some ways. Cool, but not my cup of tea I guess? 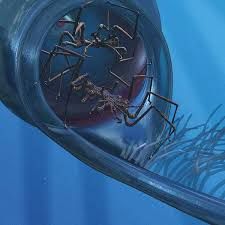 These little guys, though? These are great. These are the spindletroopers, colonial sea spiders that live in specialized polyps on the ocean phantom’s body and defend it exchange for their share of the phantom’s food. Their design isn’t much different than an actual sea spider, but they have a very nice color pattern, even if none of the show’s shots I can find actually display them very well.

Their behavior is also pretty believable. While there are no colonial sea spiders in real life, there’s nothing explicitly stopping them from taking that path. After all, most spiders (sea spiders aren’t true spiders, but may be arachnids) are extremely solitary, and they have colonial members, something we’ll talk about in more detail later. More interestingly, in real life, there are species of ants that live symbiotically with trees, the trees growing food specifically for them in exchange for their service as defenders. I approve and I want this personal security system for myself. How do you grow spider homes? 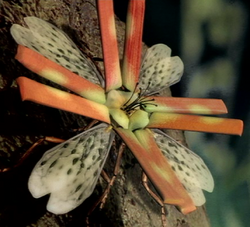 This is one of the most creative designs in the series. What we see is actually four beetles, standing head to head. Their wing covers and wings form false petals, their antennae stamens. This is one of two giant, predatory insects of Antarctica that we see, which has moved north enough by this point that it has a massive rainforest, grown from the species that colonized it first. These beetles prey upon descendants of modern petrels and other tube-nosed birds by pretending to be the flowers on which they feed. Unlikely to have such cooperation, but neat! I love their colors! 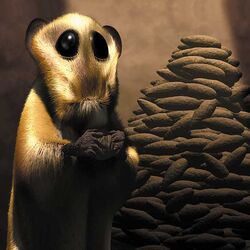 The poggle is probably the most normal of the animals of 100 million years in the future, basically just a cuter hamster. According to the tv series, it is the very last mammal on earth, although the book says that there are a few others, but all of them are strange and hyper-specialized. While it’s not too likely that mammals would end up so rare, given how dominant they are, more successful groups than them have been wiped out before, and the tragedy of our last living relative is striking. 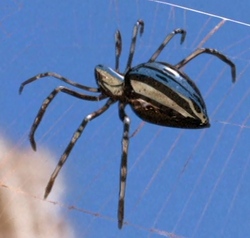 Silver spiders are pretty much just silver spiders design wise, but that’s fine. Spiders are great, and the metallic look is really striking, and given the CG of the time, one of the nicer-looking things in the documentary. Fleshy textures are hard, but shiny metallics are much simpler. It’s why Pixar’s first movie was about toys. Both the spiders and the poggle are native to a great plateau created when Australia drove into the Himalayas from the south, driving them even higher. While they make their webs for bugs, they also take care to collect airborne seeds that land on them and collect them in shared storage areas.

This is what the poggles feed upon, growing fat and numerous before the silver spiders come and eat them. That’s right, those noxiously cute little buggers are livestock! My thoughts on this vary. Colonial spiders with shared webs? Totally believable. There are spiders that work together like this in real life. But animal husbandry? That’s harder. Some ants do raise aphids, but aphids are really simple creatures who mostly reproduce by cloning and don’t move around a lot if they don’t have to. Mammals are a lot more mobile and curious. Narratively, however, it’s brilliant. The 100 million years segment ends on a poggle being devoured by a silver spider, emphasizing totally that this world no longer belongs to humanity’s relatives.

That is not, however, where I’m ending my exploration of this time period. I want to transition more smoothly to the next hundred million years, and so we’ll be seeing a beast whose relatives will dominate the future. 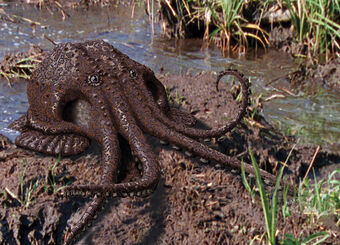 Octopuses (proper pluralization, really, yes I know it sounds wrong) are already pretty capable of handling themselves on land for a short period of time, and the swampus takes those traits to a greater extent in order to thrive in the swamps created when the former Bengal Bay filled in with runoff from the mountains after being closed off by East Africa. Four of their arms have become fleshy pads for sliding over mud and wet grass. They are the focal animal of their episode, much of it revolving around their mating season, and, as it turns out, one of the most important creatures in the entire series, as a foreshadowing of what is to come.

See you in the future.

Part three is out! Read it here: https://monstersrealandfantastic.com/the-future-is-wild-part-three/