As a kid, I subsisted on a healthy diet of nature documentaries and science shows. So imagine my joy when something came out that not only combined the two on a deeper level than I had ever seen but threw dinosaurs into the mix for fun. 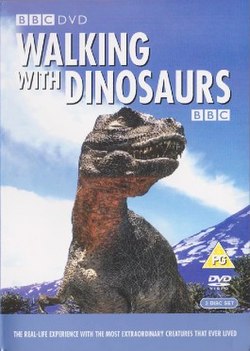 This series rocked my world. I don’t think I saw the premiere, but my parents got me both the VCR tapes and the book, which took a deeper look at all of the time periods involved. While I recognize its shortcomings today, mostly in the inaccuracies that were known even back then, I still love it and realize it’s a major factor in my style of worldbuilding even to this day. As a kid, I loved drawing monsters in “natural” settings and describing their habits, like a documentary. As readers of this site will know, I kept that habit up, although I got a little lazier about backgrounds.

It didn’t just influence me, it kickstarted a genre. The “monster mocumentary” I’ll call it, putting creatures that no longer exist into a documentary series. The “Walking With” series remained the most prominent and impressive example, producing Walking With Monsters, Walking With Prehistoric Beasts (which I actually won a VHS copy of in a contest) and my personal favorite, at least as a kid, Sea Monsters. This is still the popular way to do a dinosaur documentary, even if few captured the public eye like the original.

But more importantly for this article, it led to my first exposure to speculative biology. Speculative biology, or speculative evolution, is a form of fiction that attempts to imagine realistic animals and plants created by different factors than those of our world, although it sometimes proceeds actual discoveries. The existence of a four-winged birdlike dinosaur was hypothesized a century before Microraptor, an actual four-winged dinosaur, was discovered.

Tetrapteryx, a hypothetical four-winged dinosaur that turned out to exist.

I am of course talking about “The Future is Wild”, possibly the most mainstream speculative biology to ever exist. Over the course of 13 episodes, it explores three different time periods in a future where humans have left the earth, growing progressively weirder the further we get from our time.

If you want to experience this series for yourself, my personal favorite version is the book. It’s pricey, but it includes a lot of extra stuff you don’t get in the series itself. 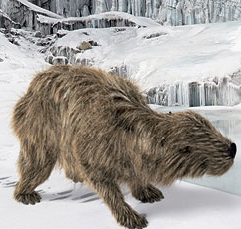 We’re starting with the most mundane of them all, just to warm you all up to the basic idea. That right there is a rodent, and it’s the largest land animal in a frozen Europe, consumed by a new ice age. It’s a descendant of the arctic marmot bigger than a modern capybara, and as the animals in this series go, this is as tame as it gets. Completely believable, if a little uninspired, the shagrat is a great introduction to the concept. Take a modern animal, apply new pressures, guess as to what might happen. In this case, greater cold and a lack of large herbivores encouraged growth into this bulkier form. 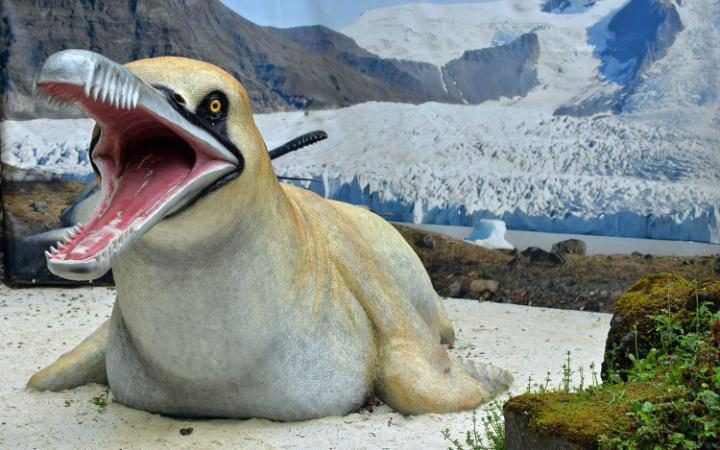 And now that I softened you up with a big guinea pig, bam, bird-seal! Gotcha, this show’s actually really weird! Gannetwhales are descendants of modern-day gannets, seabirds known for diving underwater and swimming with their legs. In the future, they have lost their flight to focus entirely on this swimming method. The result is something like a horrible bird seal, and I love it. The coloring and anatomy is really fantastic at making you realize it’s not just a seal even without the head and its enormous snapping beak. It’s such an uncanny animal, clearly not the shape a bird should be.

Weirdly, it’s not totally impossible. There have been birds who actually lived like this, in particularly the hesperornithids. Just like a gannetwhale, they could not fly or even stand, just pushing themselves around on land with their hind legs. They weren’t so massive, but other than that, a gannetwhale looks just like them, down to the horrible jagged beak. 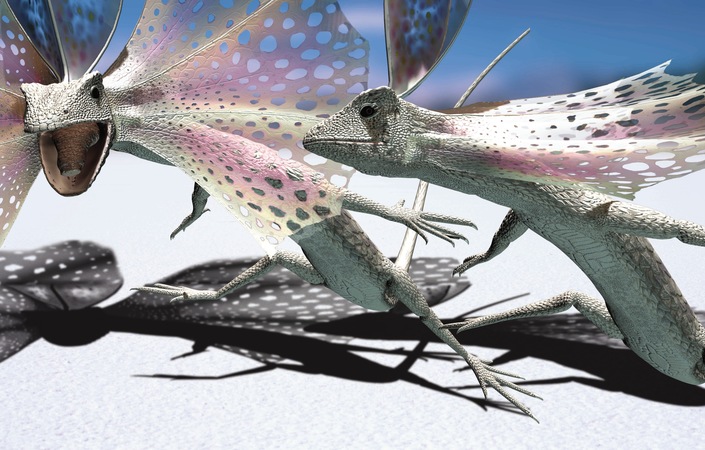 Despite appearances, cryptiles are not related to frilled lizards, and their frills are not for defense, but for catching the brine flies that cryptiles eat. They live on the brutally hot and uncomfortable salt flats that were left behind when the Mediterranean Sea dried up. They’re simple, but I like them a lot. Anything based on a frilled lizard is cool, and I love the contrast between their iridescent frills and their nearly colorless bodies. 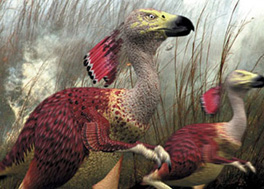 5 million years from now, the cool, dry climate has turned much of the Amazon into a grassland. Caracallas today spend a good deal of their ground on their time and have long, strong legs. Here, this trend leads to ground-dwelling monster birds. I always like ground-dwelling killer birds, and the nubbier and more useless their wings, the better. Cut the pointless and rather unlikely front claw off and you have a perfectly nubby wing. I’ve seen weirder land-birds, but these are some pretty solid ones, especially with their flashy crests. 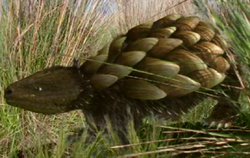 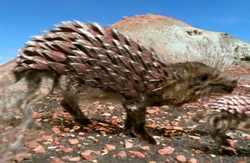 Two closely related species, the rattlebacks are heavily armored rodents native to both North and South America. I love the subtle details. The South American rattleback has to deal with giant carakillers, so it has a much thicker shell, while the North American rattleback (the cooler one in my estimation, due to its striking metallic coloration and slightly more pig-like head) is a little more mobile, having no major predators in its icy cold desert region. 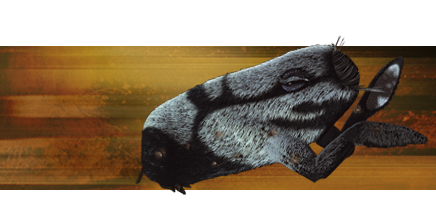 You know what’s an awesome way to design a creature? It’s something that’s been done a few times in this series already and will be done a few more, but it never ceases to be cool. Convergent evolution, where two completely different lineages end up looking similar due to similar lifestyles. You see, that little mole you’re looking at is the spink, and it is a bird. While it’s widely derided as the most unlikely creature in the first part of the show, and I’m inclined to agree, it’s still a fascinating creature. It’s barely birdlike at all, living nearly entirely underground, digging with feathers modified into something more akin to scales, and crawling around on their elbows. That’s amazing, and like the gannetwhale, there’s something really neat about seeing an animal twisted into a totally alien shape for a new environment.

We aren’t ending part one of our little retrospective with my favorite of the pack. That was the gannetwhale. No, we’re ending on what originally got me excited for the series. What image was it that got tiny Web most hyped to watch this fantastic new thing? 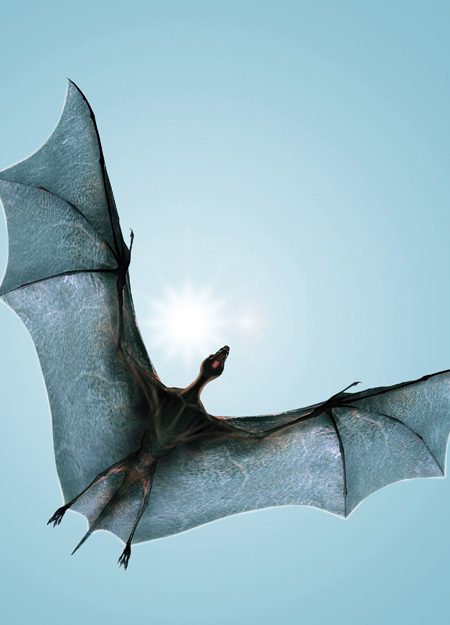 This shot immediately got me pumped for the series, showing off one of the most threatening creatures in the series in a very flattering angle. While most of the CG has not aged well, this shot of the deathgleaner is just cool enough I can ignore that. It’s everything the series promised; familiar, but alien. And indeed, these monsters were so, predatory diurnal (active in the day) bats that hunted spinks rather than bugs. It still feels pretty believable to me that if you removed predatory birds, bats could fill that role, although probably not as well, given they can’t attack using their feet.

There are very few good images of a deathgleaner’s face, but I’m very glad I found one. I was remembering something more lengthy and wolflike, impressive and canine, but really, it’s more of a cartoon weasel. Pointy and conniving looking, it has a lot of personality. I’d like a pet deathgleaner. I just did a vampire article and it reminded me of how much I love bats. How do people hate them? They’re amazing. They don’t even need to become giant gliding terrors to be cool! It just, you know, helps.

Stay tuned for part two, where I’ll cover the rest of the series! Will I find something I like more than the gannetwhale? Perhaps even one of my favorite creature designs in all of television?I don’t know, there certainly are a lot more invertebrates…

The Future is Wild- Part 2

The Future is Wild- Part Three