Miss parts one and two? Read them first!

The world had recovered from a mass extinction that wiped out most life as we know it, including pretty much every terrestrial vertebrate. No more reptiles, mammals, or birds. The world itself has also changed to an incredible extent. All the world’s continents have come together again, forming a single supercontinent and a singular, enormous ocean. In this strange, emptied world, those few species remaining have diversified to fill it in new, wonderful ways. Are you ready for the age of Invertebrates? 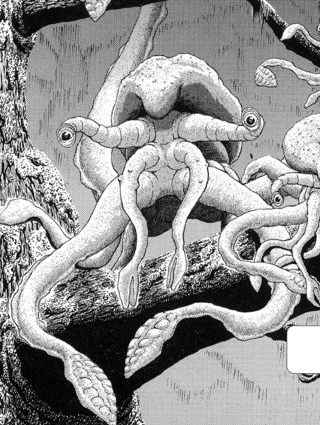 It is nearly impossible to get a readable shot of what is arguably the most important creature in all of The Future is Wild, so we’re making do with a beautiful panel from the manga. I ended with the swampus for a reason last time. This is one member of its legacy, a clade of land-dwelling squid. So why were they the most important creature in the series, and in fact the last one featured? Well, they appear to be on the path to sapience, like humans. They are capable of simple tool use, teamwork, and empathy. We are left off on the assurance that the earth will once again be in the hands of a sapient creature for the first time since humanity left the planet.

Because that worked out so well last time.

Making fun of human prejudices towards intelligence aside, the squibbon is great. I love how a cephalopod’s body can be arranged for tree life, and anything with stalk eyes gains at least a couple cuteness points by default. However, I like the other terasquid we get introduced to more. 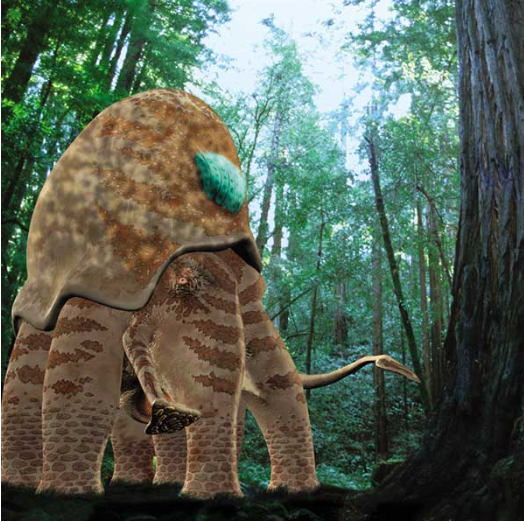 If a squibbon is an ape, a megasquid is an elephant. Slowly shuffling through the forest on six pillar-like legs, the megasquid uses its two loose arms to grab pretty much anything that comes within reach, from the fruit of lichen-descended “tress” to unlucky squibbons. I really love the shape of this thing. Turning the cephalopod shape into a land-dwelling organism really makes a weird creature, with a huge amount of “head” above where the eyes are set. The coloration is especially nice, with that turquoise, vibrating air sack on the mantle standing out beautifully. 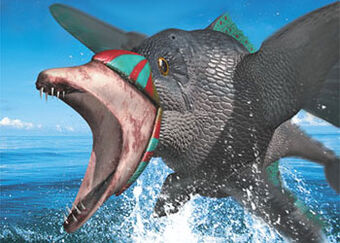 You’re seen this one on the cover of the book back when I linked it, and it’s one of my favorites. With birds extinct and a massive ocean surrounding the entire planet, fish were well-placed to replace them, with their pectoral fins becoming wings. The flish we actually get to see are both great designs, but out of them, I think I prefer this one. I love the color of that beak and how innocent it looks with those eyes until its horrible pharyngeal jaws pop out. It almost looks like an innocent fish possessed by something much nastier. 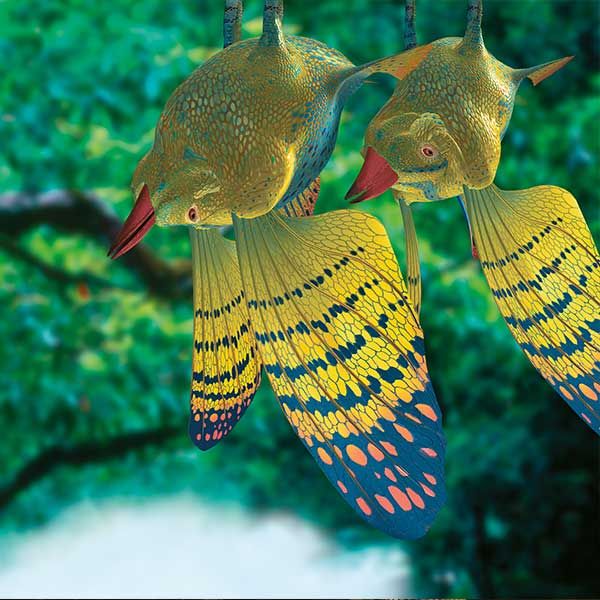 The forest flish is also great though, smaller, more agile, more of a sparrow to the ocean flish’s skua or petrel. I love how much personality these guys have, hanging upside down by hooks formed from their pelvic fins, and their coloration is just great. These guys hunt insects in the same forest that squibbons and megasquids inhabit, thankfully not the giant insects that ate birds in the Antarctic jungle. 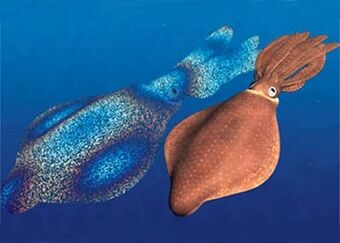 Squid do not just rule the land but the sea. Bigger than even the largest colossal squid today, rainbow squid take their modern cephalopod’s color-changing abilities to an incredible extreme. The squid on the left is a male, putting on a vibrant mating display for the female to his side. It’s one of the most spectacular sights in the entire species, and not unrealistic; modern cuttlefish often put up such displays for potential mates. They also at one point mimic a whole school of prey, encouraging ocean flish to come hunting before grabbing them from the sky. 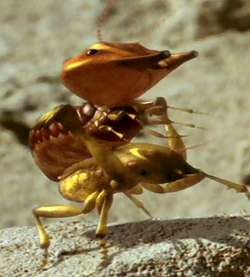 In the center of the continent, there is a vast desert where the rains cannot reach. On the surface, few animals survive, and those who do tend to take refuge during the hottest parts of the day. Among these, chief are the terabytes, descendants of modern day termites. Here we see two members of the species, forming different castes, something that is really common in fiction but in real life, best represented by termites themselves!

The bottom termite we see here is a transporter, a simple worker whose job is to carry the other castes around. Atop its back is a glue spitter, an offensive cast who spits sticky strands that pin down prey and rival terabytes. They use these to capture garden worms and harvest their algae for farming in their termite towers, something else termites actually do in the real world, just with fungus. 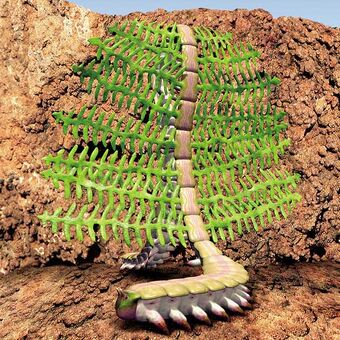 Cute. Combining the most charming features of a caterpillar, a centipede, and a polychaete worm (its actual categorization and a group of annelid worms, the group earthworms are within), the garden worm is an amphibious creature, spending most of the night in the water, but coming up to the surface every day to expose its photosynthetic algae to the sun. Some animals do this in real life, and similarly have fleshy protuberances to carry their symbiotes in. On land, they are harassed by terabytes seeking to steal their algae. Underwater, they deal with far worse beings. 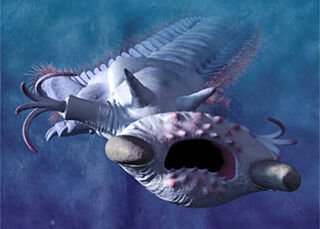 This was the scariest thing to me in the series as a kid. The way it popped its feeding trunk out as it chased its prey freaked me out but good. It’s still pretty haunting to me now. That big frown is pretty goofy, but its goofy in a really scary way. These guys hunt in the pitch-black caverns beneath the central desert, the leftovers of the shallow seas that were otherwise swallowed up as the continents merged. They’re delightfully spooky for an apex predator, with a nicely death-pale body surrounded by rust-colored filaments.

In a series less overloaded with brilliant designs, I might be inclined to name one of these delightful worms my favorite creatures. However, there is as yet one I love more, one of my favorite designs ever.

This absurd creature you’re looking at is a snail. It hops on a single, three-toed foot, negating the need for a water-heavy slime trail, drilling through plants with its tough radula (toothy tongue that mollusks have). I love everything about it. the way it moves, those crazy chameleon eyes, the big spiny shell. They have more personality than I know what to do with.

This shot from the manga really captures how cute they are. Such a graceful neck for a big beefy shell! 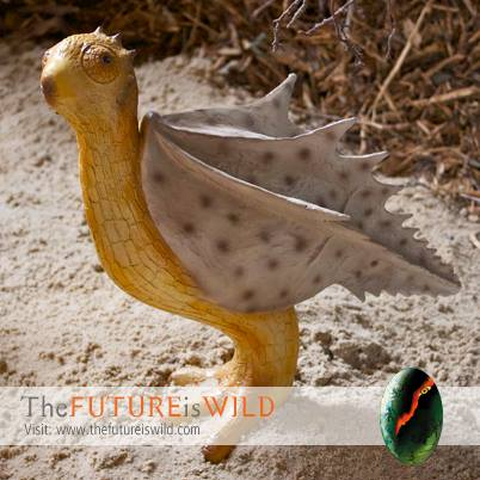 I lost my mind when I came across this picture in the early research stages of the article. I thought it was a picture of a desert hopper toy and hoped to get my hands on it. Sadly, it was not to be. That’s actually a model from a German theme park that put up figures of animals from The Future is Wild in 2016! That’s so recent! In fact, it’s not the only attention the series has been getting in recent years. 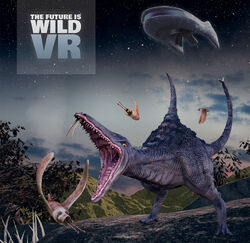 We’re getting a full-scale VR game that doesn’t just cover the animals we all know and love, but adds 2 new time periods, 20 and 50 million years in the future, each with a new cohort of animals to discover. The release date is yet to be announced, but I hope that it’ll draw new attention to this series. I’m cautiously optimistic that this franchise’s future is still wild.