Wasps are, by and large, likely the most despised animals on the planet. In a world where even spiders are beginning to be recognized as the cute and beautiful animals they are, wasps are still regarded as vicious brutes who contribute nothing to the ecosystem and attack for no reason. Well, I’ve had enough of that. Wasps are a massive, diverse group that contributes an incredible amount to our world.

Now, for this, we’re going to ignore the fact that that bees and ants, beloved as they are, are actually nested within wasps. Wasps are, in fact, the only insects with stingers. They are heavily modified ovipositors, the organ that most insects use to lay eggs. So that charming fat bumblebee, and the honeybees who make sweet, tasty goo for you? They’re wasps, and you love them. But no, we’re cutting out those small slices of waspdom. What do your least favorite animals do for the world?

Figs are a pretty major food source in the middle east and were one of the first plants to ever be domesticated. Depending on where you’re reading this, you’ve probably never eaten a fig, but they’re mentioned in the Bible a lot, and might be the forbidden fruit. This forbidden fruit is pollinated exclusively by a family of wasps known fittingly as fig wasps. Each species of fig, over 700 world wide, has its own species of wasp that specializes in pollinating it.

Fig wasps lay their eggs within figs, bringing with them pollen they picked up from the fig they themselves emerged from. This way, the baby wasps get a safe shelter and food source and the fig gets pollinated. Of course, there are cheaters, and figs have various ways of dealing with them. In some species, the wasps have to go out of their way to collect pollen before entering a fig. This doesn’t really have any benefit to the wasp, since all it wants is to mate and lay its eggs. However, cheating by not gathering pollen is strongly discouraged; non-pollinated figs drop off the tree, killing the wasps within. Basically, the tree is forcing a selection pressure onto its wasps, only letting those who play nice reproduce.

A tarantula hawk wasp, a dedicated parasitoid of tarantulas.

Fig wasps are important, and many other species of wasps are pollinators, but the most ecologically impactful wasps are the parasitoids, the eternal reminder that nature is just absurdly scary, in a wonderful way. Parasitoid wasps lay their eggs within other living arthropods. Some, like the tarantula hawk above, sting their prey in the brain, using such a precise strike that they can take out the fear response of their prey, allowing them to lead it like a dog on a string and lead it to a safe spot to be buried. Others simply alight on their prey and lay their eggs, leaving it mobile and wandering. The unfortunate victim will be eaten alive, the larvae within saving their vital organs for last so their prey remains fresh.

Okay, that’s probably more horrifying to you than cool, but this really an amazing adaptation and incredibly integral to the environment. Parasitoid wasps are the only animals known to bend viruses to their will, turning them into biological weapons. These wasps have viruses hiding in their DNA and can release them into their prey, where the viruses shut down the host’s immune response. Most animals have sections of virus DNA in their genetic codes, simply due to viruses inserting themselves there and becoming deactivated, but nothing else on the planet can utilize this foreign code to create viruses on command.

More important than that, however, is their ecological role. Plants are often thought of as more of a backdrop to life than living creatures in their own right, largely there just to form the base of the food chain. However, plants struggle to live just like any other organism. They can’t run, so they come up with all sorts of other ways to defend themselves. Some put up vicious spikes, others concoct various hideous poisons in their bodies, and a few enterprising leafy critters hire armed guards and pay them in the flesh of caterpillars.

When insects feed upon plants, they leave a variety of fingerprints that the victim uses to identify its assailant. Salivary chemicals, vibrations, the means they use to feed, whether biting with jaws or piercing with a proboscis. Plants are able to read these signs and know what species of bug is eating their leafs. That is amazing enough on its own, but what the plant does next is even more impressive. The plant releases pheromones specific to the species of insect eating their leaves, which attracts the specific wasps that lay their eggs in that species. 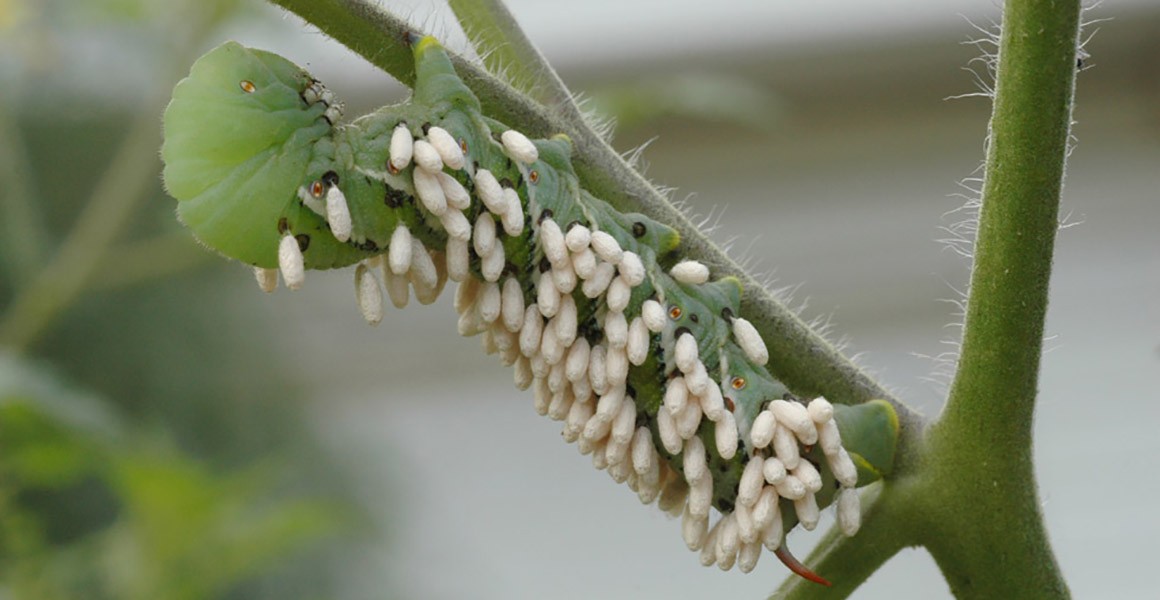 It’s beautiful cooperation. Working together, plants and wasps keep herbivorous insects from stripping the whole world of greenery. Nature is brutal, but in that brutality, there is a precarious balance. Every animal is part of a system, and the loss of any can throw a wrench in the gears.

Also, wasps don’t trust you because apparently their babies are delicious. So that’s not entirely on them.

Want more modern monsters? Check out the links below!