Africa is pretty famous for its megafauna, with a whole slew of big, weird animals. There are animals with knives for faces, tanks that run around on riverbeds and kill crocodiles, and animals with a tentacle for a nose and two swords sticking out of their mouths. Among these, towering over them all, are giraffes, known most for being the tallest animals alive. Males are slightly taller on average, with the tallest ever measured a little over 19 feet tall, the tallest measured female topping out at 17. While this is impressive, well over three times the height of the average man, it’s hardly the only unusual feature of these baffling mammals.

Let’s start with the basics. Giraffes are artiodactyls, “even-toed” hooved mammals in common terms. Most hooved mammals you know are artiodactyls, from pigs to deer. Giraffes and their okapi cousins are the last members of a much larger, more diverse group of mammals that ranged through Africa, Asia, and Europe. One species, Giraffa nebrascensis, was identified as far away as North America, although it later proved to be the identification of teeth from the moose Cervalces scotti.

The earliest giraffe ancestors were not quite like giraffes or okapis, with longer necks than average for a mammal, but not matching even those of an okapi. In fact, the main defining feature of the group has nothing to do with great height, instead focusing on their distinct horns, called ossicones. Ossicones are distinguished from most animal’s horns by being formed from ossified cartilage rather than directly from bone and their covering of skin and hair instead of hard keratin. (I would talk about Sivatherium here, but it is such a fascinating topic I would rather leave it to its own article) 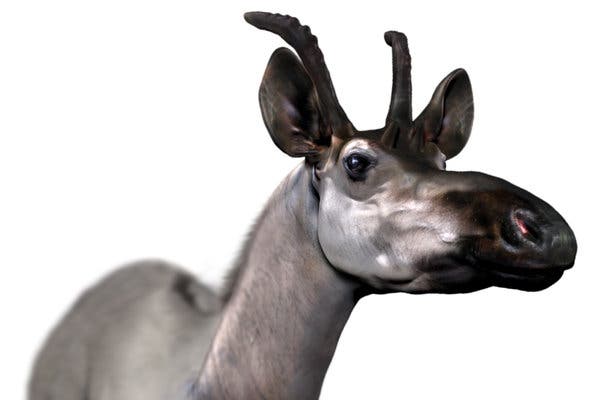 So as iconic as the giraffe neck is, it’s actually restricted to a small branch of their family, and on top of that, there is a lot of disagreement as to why they grew so tall. The traditional explanation that it is for reaching higher branches for feeding purposes, but some scientists disagree, attributing their phenomenal neck length not to feeding pressure but sexual selection, an idea dubbed the “necks for sex” hypothesis. This was evidenced by a few factors, including the fact that giraffe males duel by using their heads as flails, something which is absolutely metal but also makes them look like wacky waving inflatable rockem sockem robots. On top of this, male necks continue to grow in bulk their entire lives. However, while the original paper saw natural selection as a poor explanation of giraffe necks, the modern view is more nuanced. Giraffes do indeed feed preferentially on higher branches that other browsers can’t reach, where more leaves remain. Male giraffes also don’t have proportionally longer necks than females, suggesting there isn’t as much sexual pressure on neck length as might be expected. Similarly, while the tallest males suffer in a drought because of their high nutritional needs, juveniles forced to compete with other browsers for low leaves also die in large numbers. As such, it seems that both survival and sexual selection work to select for longer and stronger necks.

Whatever the case, a giraffe’s neck differs from the long necks of reptiles like the sauropods. Reptiles have very variable numbers of vertebrae, so when they have long necks, they tend to be formed from many small spine bones. Mammals are not so flexible. The vast majority of mammals have 7 vertebrae in their necks, and giraffes are no exception. As such, these bones are incredibly elongated in giraffes.

Bone Clones. Those are normally a LOT flatter.

Their necks and feeding habits make giraffes a shaping force on the African savannas they call home. Giraffes are the main threat to adult acacia trees (I’m going to use this general term, as there are many acacia plants across multiple continents), which can grow tall enough that only giraffes can reach them. Giraffes and acacia trees have shaped each other over the millennia they have interacted, with the trees evolving more and more elaborate defenses over time to deter giraffes.

Acacia trees have massive thorns, forcing careful eating to avoid impromptu lip piercings. Giraffes have a furry, tough upper lip that can resist these thorns as well as extremely long, flexible tongues, over a foot long and purple, that can navigate around them. As a secondary line of defense, plants that are being fed upon produce toxins called tannins, which both taste foul and bind to certain proteins, reducing the giraffe’s ability to process them. Worse yet, the chemicals a damaged tree produces can actually be picked up to trees downwind, causing them to prepare their poisons in advance. As such, giraffes tend to walk upwind when feeding, 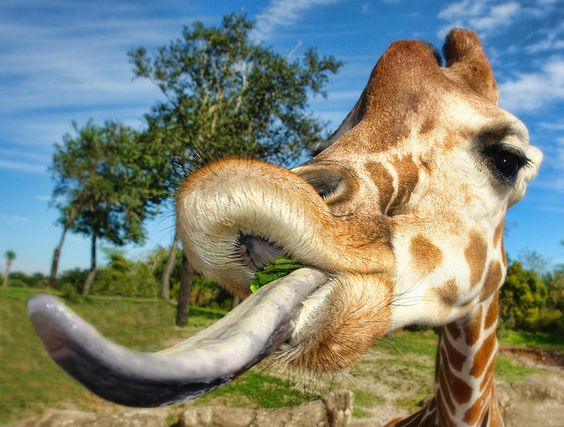 Timfy Mills. A giraffe’s tongue, weird even for a giraffe.

Giraffes, unusually for such a huge animal, may be major pollinators for knobthorn trees, a type of acacia. These plants flower in the middle of the dry season, the time when most of Africa’s mammals are most desperate for food, presenting vibrant, delictible snacks right on the ends of the branches, easily plucked by giraffes. The giraffes, lacking for choice, spend the hottest portion of the year walking from knobthorn to knobthorn, potentially spreading pollen with each visit. It’s just a small part of how animals help shape the world around them.

Before, we mentioned male competition among giraffes, but that’s not the only unusual thing in giraffe sexuality. Oh yeah, turn down the lights, get out some candles, and turn up that Marvin Gaye record, because it’s time to talk about sex.

To test if a lady giraffe is ready to have sex, a male will drink her urine. Sorry. By tasting the urine, he can test for hormones that indicate her fertility. If he finds her to be in heat, he begins defending her from other males while attempting to mate. Males and females normally live in separate groups, with older males often going solitary, likely due to food competition. They are known to produce deep infrasonic hums that travel for miles, potentially allowing the widely-spaced giraffes to find each other when it’s time for reproduction. Juvenile males often practice the neck-fights of the adults, then mount one another.