In my recent article on giraffes, I mentioned that they were part of a large swath of different animals, all of them now extinct except for themselves and okapi. That article was a runaway hit by my standards, and who am I not to capitalize on such an opportunity?  I had already planned on an article on these beauties, so why not push it up? 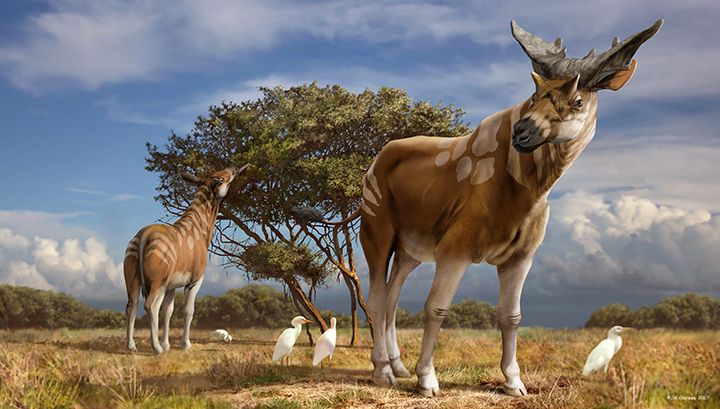 So first of all, what are we looking at? What is a Sivatherium? That was a question asked for quite a while after the initial discovery of the animal’s remains. Initially discovered in India in 1871, Sivatherium was difficult to identify from fragmentary remains, thought to be a link between the American pronghorns and the African giraffes. Later, this link proved to be tenuous. Sivatherium was all giraffe all the time, but one on steroids. 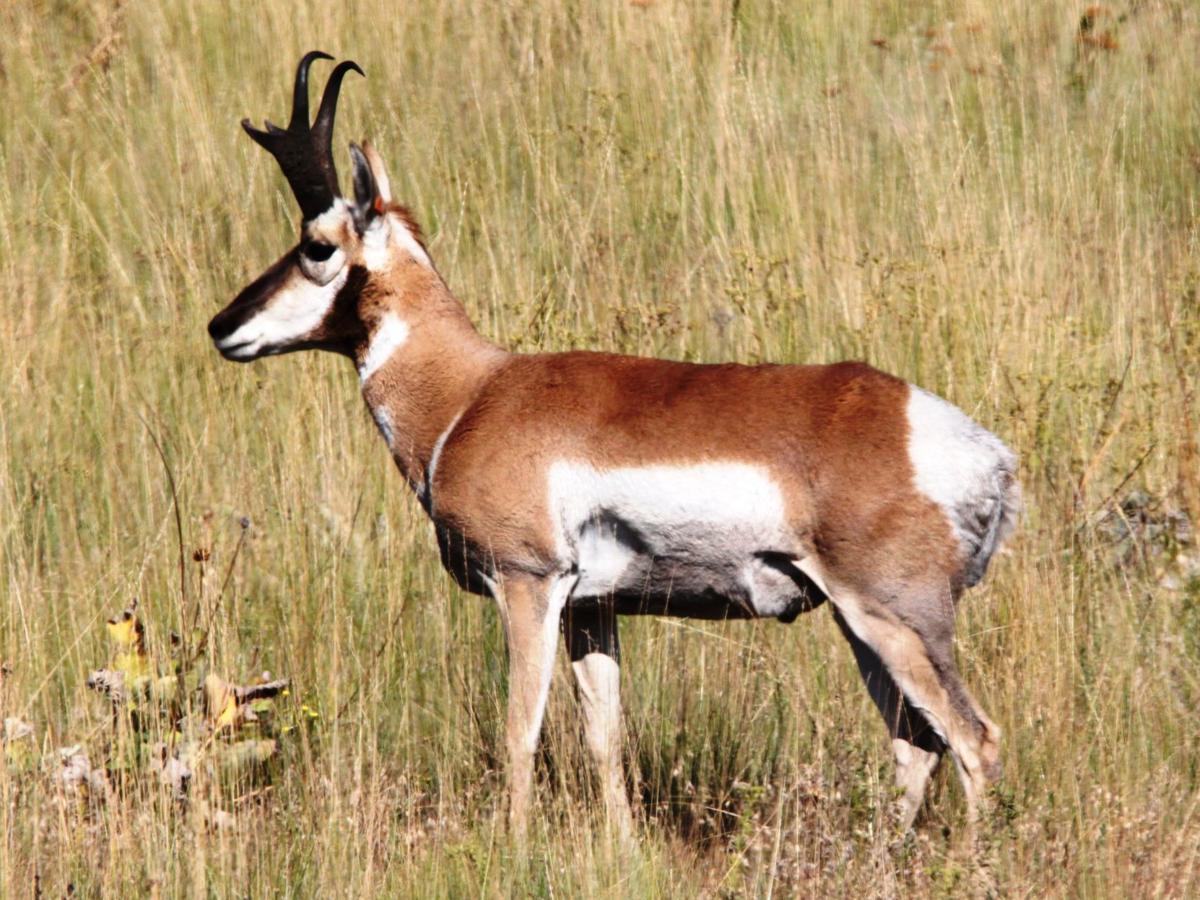 Pronghorns are actually related to giraffes, but Sivatherium isn’t the missing link between the two.

It was only thirty years later that Sivatherium was given its name, named after Shiva, the Hindu god of destruction, and it was placed within the giraffe’s family tree. Their closest living relatives are okapis, and in shape, they largely resembled them, but massive. A modern okapi tends to measure about 5 feet tall at the shoulder, while a sivatherium could be a little over 7 feet and weigh in at upwards of 2,700 pounds. Most striking, however, were its horns.

Like the modern giraffe species, the Sivatherium had ossicones, a form of horn formed from ossified cartilage. Modern okapi have 2 and giraffes 3, but Sivatherium had four, two small ones similar to an okapi’s and two much larger, more antler-like ones. These were significantly larger in males, suggesting a role in sexual selection. In most depictions I found of Sivatherium while researching this article, these horns are depicted with a keratin sheathe, like most animal’s horns. However, in modern giraffes and okapis, ossicones are covered in skin and hair. 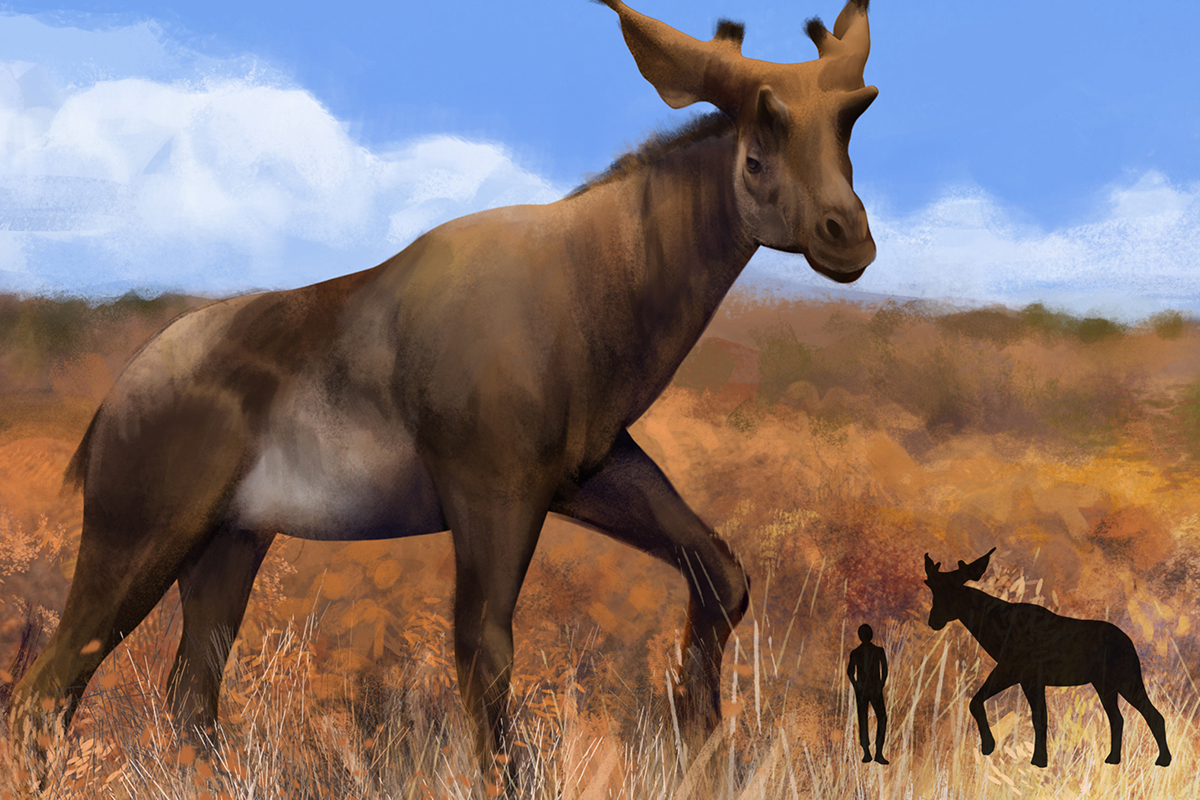 Lucas Lima. A Sivatherium with skin on its ossicones, which looks awesome.

On the topic of appearance, this modern view of Sivatherium as a more massive okapi is quite new. This body shape was only determined in 2016, using new remains and new techniques to gain an understanding of its true body shape. There was a massive overhaul in Sivatherium’s estimated size and body shape. Based on just its large skull, it was originally thought to be as heavy as an African elephant, up to 6,500 kilograms or 7 tons, for those of us who only speak American! However, with more remains and a better understanding of its anatomy, it was brought down to a more reasonable 1,200-3,720 kilograms, 1-4 tons.

First, on the upper end this is still the biggest ruminant that ever lived, ruminants being mammals that have to “ruminate”, puking up their food into their mouths to re-chew it as part of their digestive process. Be glad you’re not a ruminant. This is, of course, a very wide range. It is difficult to calculate the exact weight of an extinct animal with no soft tissues to measure, and notably, the complete skeleton is still not known, just surmised from what we have. Whatever the case though, this was a massive animal, if not as tall as their modern relatives.

The earliest depictions of Sivatherium portrayed a very moose-like animal, with a short neck and big nose or even a trunk, initially guessed at because of their large nasal cavity. Sivatherium is already a pretty weird animal, but this interpretation was even more bizarre! I approve of this horrible giraffe-moose, even if it’s not accurate. 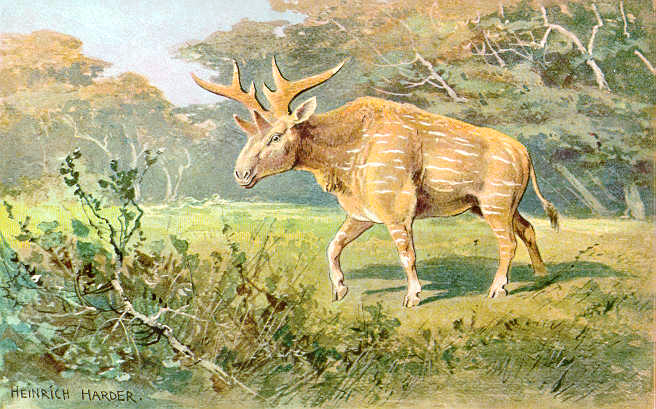 So with all that out of the way, what do we know about their actual lives? Well, for one, some species coexisted with Giraffa, the modern giraffe genus, in much of Africa. They avoided competition with a different diet. Modern giraffes are browsers, feeding entirely upon leaves and flowers in the higher branches of trees. Through analysis of wear on their teeth, it has been determined that Sivatherium would have been mixed browsers and grazers, feeding on leaves and grass alike.

The genus Sivatherium came to be about 7 million years ago. However, there is disagreement about when it went extinct. Most agree that the last members of the genus were extinct 1 million years ago, but there have been arguments for late-surviving populations. Indian cave paintings only 20,000 to 15,000 years old have been tentatively identified as depicting Sivatherium. An even more modern Sivatherium remnant was proposed by Edwin H. Colbert in 1936. The figure depicted above was found among the reins of a Sumerian chariot, only 5,500 years old. Edwin Colbert looked at the horns of the creature depicted and compared them to the horns of a Sivatherium, and the resemblance really is crazy, looking at what Edwin depicts here. It really is an exciting figure, especially given it has a nose ring, suggesting it was tame and being led around. That is awesome.

Unfortunately, it’s not definitive. As you might notice, the horns on the back of the head, identified as a sivathere’s ossicones, are incomplete. Well, they were found, and they don’t look a lot like those horns, which are much more simple and flat in all known members of Sivatherium. 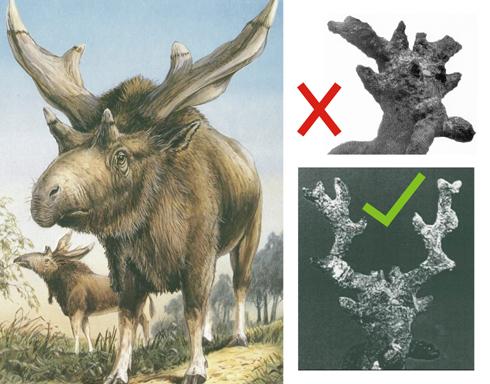 Darren Naish. The figure in the bottom right is the complete version. On the left is an outdated sivathere.

Most scientists believe now that the figurine was meant to display a Persian fallow deer, which is native to the region and known to have been semi-domesticated by the Sumerians. Sadly, it seems like this is a more realistic option. In the end, domesticated, chariot-pulling beef-giraffes are only in my dreams. And hey, maybe in yours too now.