Oh boy. So, uh, I didn’t like Jurassic World very much. It had a lot of problems. But its sequel was something else. On the plus side, it does get away from being largely a repeat of the first movie like the first Jurassic World movie. On the downside, it’s quite possibly the most shallow action movie I’ve ever seen. The characters are about as deep as a single layer of graphene. The plot is self-sabotaging, inconsistent with the action in a way that I figured only video games could pull off before this film. And worst of all, the monsters are incredibly poorly used!

So this time, we’re going to do this a little differently. Instead of just talking about the niches each monster fits into, I’m going to give my opinions on how they could have been used better. Because, well, they’re just awful. Let’s try not to bite off more than we can chew. 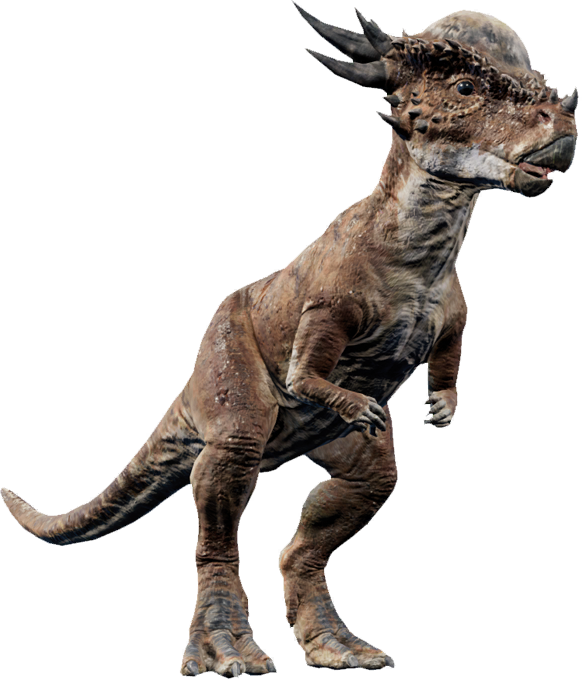 Let’s start with one that’s actually used well. The Stygimoloch is basically a goat, a cantankerous herbivore that solves all of its problems with its head. Mostly non-lethal, so it suits its somewhat comedic role in the film. It’s obviously rather laughable that it could smash through a brick wall, but hey, this series threw reality to the wind decades ago, why start caring now? I’m a little disappointed how easily the heroes are able to control it. It turns it into another “hero dino” that seems to straight up be on the side of good, rather than being a chaotic, dangerous animal that acts solely on instinct. Still, better than what we’re going to get.

So in real life, Baryonyx is mostly known for having one impressively oversized claw on each hand and a more crocodile-like head, indicating a fish-based diet where it caught prey with its hands. In the movie, it’s a mindlessly aggressive predator that walks through dripping lava to catch two humans. It’s rather baffling. I know I said that they creatures in Jurassic Park were movie monsters, but before they still kind of acted like animals. Now they’re just absurd cartoon kaiju who exist only to destroy and thrash around violently. 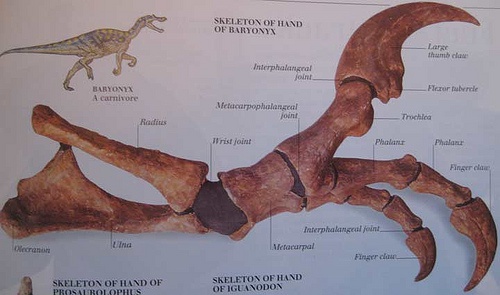 The famous claw of the Baryonyx.

So first thing I’d do to fix that is change the design. The most important thing is exaggerating that one oversized claw so that it’s the most noticeable feature of the design. Jurassic Park is obviously not above exaggerating features, so this much is within the spirit of the series. By focusing on those claws, we’re creating the Meathook, something that will be scary for more than mindless aggression. We’ll have a monster that will impale you on its claw and drag your body around for later. Dark shots on a rainy night, showing nothing but one horrible claw dragging a victim. Really build it up. A perfect monster for dragging people away screaming, grabbing with long jaws and a terrible claw.

Of course, we could only do that if there was the slightest bit of suspense left in the Jurassic Park series, but hey, if I’m rewriting their movies for them, I can pretend they didn’t mess that up. 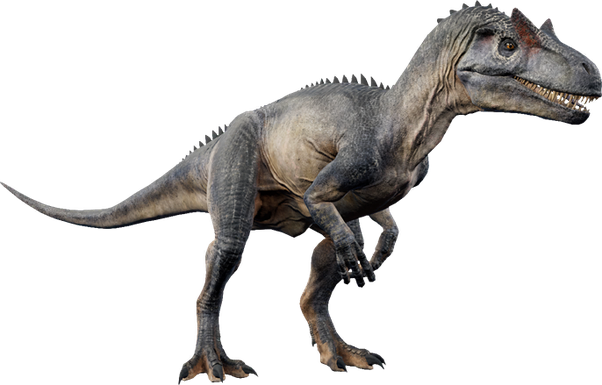 Our second big predator isn’t entirely Jurassic World’s fault. Allosaurus has always been portrayed as kind of an inferior Tyrannosaurus rex. It wasn’t as big, didn’t have as cool a name, and didn’t have the glamorous distinction of being one of the last of the non-avian dinosaurs to walk the earth. From the layman’s point of view, nothing really stood out about Allosaurus among the many other similarly large three-fingered theropods without especially impressive head ornaments.

In reality though, Allosaurus is one of the most scientifically well-known dinosaurs, with an amazing wealth of fossil evidence that provides a lot of insight not just into their physiology, but their behavior. For one, they were freakishly commonly preserved. We’ve got way more Allosaurus skeletons than any of the predators that lived alongside them, so it seems that they absolutely dominated their habitat. This includes lots of them found together, meaning they may have hunted in packs, although there’s also decent evidence of cannibalism among them. Oh, this just writes itself, doesn’t it? What we have here is the Feaster, a monster defined by its unending appetite. The Feaster is something that is never full, always looking for another meal, and very, very capable of getting it.

These are the monsters so bold and bloodthirsty that they chased the largest animals to walk the earth (evidence is good that they hunted young sauropods, and even adults of some of the smaller species) and devour their own members when they have the misfortune to become injured in the chase. Allosaurs would be found in large groups, hunting sauropods but dangerous to any human who happened across their path. You could have them break off the chase to devour an injured packmate who has become easier prey. It writes itself.

Guess I can’t complain about something that invites lazy writing not making it in. They didn’t need the excuse.

Probably the best designed of the group (some actual color, amazing! Distinguishing features!), the Carnotaurus unfortunately still gets no personality, and that stings, because the Carnotaurus really is an interesting animal. While it’s treated as another walking mouth, trying to hunt prey while there’s a volcano erupting, There’s a lot of evidence that it was a speed-based predator, the cheetah of the dinosaur world, with a stiff tail that limited turning but helped its strong legs push it forwards like a rocket. This ties in well with the Carnotaurus’ bull horns and gives us a perfect Charger! A monster all about big, scary charges, usually handled by countering the charge. Either you force it to crash into something, put out a spear, or otherwise neutralize its main attack. Basically, a Charger makes for a puzzle boss, not to be defeated with brute force but by cleverness.

And… that’s it. Jurassic World II gave us three new predatory dinosaurs, and they were all functionally identical. And the sad thing is, they don’t seem to realize that they did this to their dinosaurs. They introduce the Indoraptor (I didn’t count it here because it’s garbage like Indominus) and try to build it up as a dangerous psychopath monster dinosaur, but it barely stands out among every single new predator in the film being a rampaging pea-brain. It’s a new banality of evil. When they’re all evil, it’s pretty banal.

Even worse than that, well, the film almost attempts an environmentalist message, and that’s just something else. From my obsessive love of pretty much all life, including many species despised by most, you can probably guess that I’m for environmentalism. But shoddy writing doesn’t do anything to help the message. The film posits that the dinosaurs has a right to exist, but everything goes against this. I’d be willing to say that they could remain just fine on their original island. After all, it seemed that there were no vulnerable species there that they were threatening (and most species won’t last more than a few generations before inbreeding does them in). They were isolated and that’s fine. Of course, at the end of the movie, they’re released onto the mainland. They’re invasive. That’s kind of obvious, but that’s real world logic. Let’s explore how a film’s use of monsters can destroy its themes, shall we?

The first Jurassic World movie establishes that its dinosaurs are not real animals. They’re patched-together Frankenstein beasts no more natural than a Resident Evil monster. Now, I do have sympathy for Resident Evil monsters, but usually in a “this thing should probably be put down for everybody’s sake” sort of way. Now, this is as portrayed. You can make a case that these creatures could be better off if in a better environment than a cramped tube in a laboratory. But that’s academic. As portrayed, these dinosaurs and pterosaurs and Mosasaur are not natural organisms. They have no niche. When released on the mainland, as done in the film, they can only cause momentary destruction, then die out from their lack of genetic diversity.

That’s unintended consequence number one. They didn’t say that these dinosaurs were unnatural monsters for the purposes of making the audience not want them to survive, as they went out of their way to make the audience cheer when a little girl releases them upon the earth as opposed to letting them die. They just wanted to shut up nerds like me who wanted them to update their dinosaur designs with the time. Well you did it, Jurassic World! You shut me up, only for me to yell at you even harder now! How do you like me now, massive billion-dollar grossing series? Bet you feel stupid for doing something so… stupid!

And of course they made all their predators mindless monsters. Remember what I said about the action undercutting the themes? Yeah, that’s what I meant. I’ve never seen a movie trip over its own message so hard. Preserve the mindless eating machines! They’re basically zombies, if zombies were bus-sized and immune to small arms fire!

And you weaponized Indoraptor with a laser-pointer gun? You know if you can point that at somebody you can just shoot them, right? Little more practical than the sociopath raptor that didn’t work the first time so why would you make it again but even less controlled you absolute maniacs!?

I don’t think Jurassic World makes very good use of its dinosaurs as monsters, and they’re too monstrous to be read as actual dinosaurs, so all around, you know, not the best.