So when we last looked at frogs, we didn’t look at a whole lot of them. That’s because our last frog of D&D is incredibly complex, basically forming an entire category of its own. These are the slaadi, slaad singular. Click the link to the last section for a quick explanation of how the outer planes work in the cosmology of D&D. The slaadi are the native inhabitants of limbo, a realm unaffected by good and evil, dominated solely by chaos. As befitting such a place, it is an ever-changing mass of chaos, only stabilizing when a sapient mind wills it into shape.

Also befitting it, the only native sapient race is the Slaadi, who are frogs! I dig the association of frogs and chaos. Amphibians do have that primal, unpredictable element due to their (passing: they actually aren’t much more closely related to them than we are) resemblance to the early tetrapods of the distant past and capacity for change. As agents of chaos, slaad only form loose societies, usually only working together when forced to by the most powerful members of their species. 4th edition makes them more evil by making them wish to tear reality apart due to their belief that the universe is meant to be infinite timelines, all of which they are still perceiving, which makes them come across as insane.

The many forms of slaad.

Also fitting for a race that represents chaos at its most chaotic, Slaadi are very diverse, coming in all sorts of different forms, with some extra lore suggesting thousands more varieties could exist given the opportunity. They’re really great, so let’s get into them, starting with the most basic and common, the red slaad! 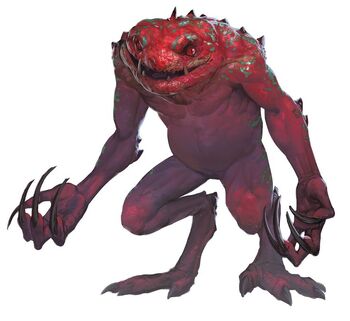 Red slaad are the most basic form of slaad. I like their 5th edition artwork, which captures a good balance between monstrousness and frogginess. I also appreciate that it’s just bright, cherry red. A lot of slaad depictions tone down the colors, but a frog can be pretty eye-bleeding! Notably, this thing is a large-sized creature; it’s nearly ten feet tall! I love that. Its proportions made me think it’s a 4 or 5 footer, but that makes it even better that it’s so tall. The red slaad are an introduction to the strange reproduction of the slaadi. If a creature is wounded by a red slaad’s claws, they may be implanted with an egg. Just like a xenomorph, when the egg hatches, the child will tear its way out, almost always killing the host. However, this child will not be a red slaad, but a blue slaad. 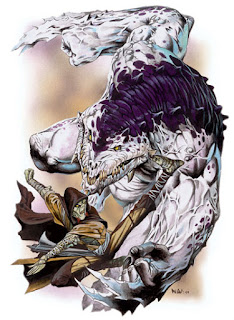 Blue slaadi are slightly tougher than their red cousins, with big scary wolverine claws. I really love the color patterns on the 3rd edition ones and their more jagged blades. Good stuff, even if it’s really more of a purple slaad than a blue one. They’re just very well put-together brutes. They also get a few more tricks than the red slaad, including minor spells like passwall, which can create an entrance through soft materials.

The wrist claws (or sometimes, the bite) of a blue slaad can infect a victim with a disease that slowly changes them into a red slaad. Despite the fact that blue and red slaadi require one another to produce more of their own kinds, they don’t get along. This doesn’t stop them from being the basis of all slaad-kind though. If either variety infects a caster, such as a wizard, sorcerer, or warlock, they will instead birth or become a green slaad. 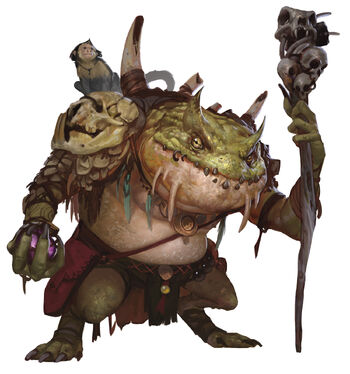 The green slaad in its various depictions doesn’t do as much for it as its relatives. It isn’t terrible. I love 5th edition’s big horns, very much like some real frogs, and those fleshy tendrils are a nice touch, but I’m not getting the same feeling I got from the red and blue slaadi that this is a monster that simply resembles a frog, not actually a frog itself. This could just be a bullywug. I do quite like the one depicted in the group at the top of the page, however.

Their lore is fine, to an extent. Like dragons, they get more powerful as they get older, but this is also a lot like demons, devils, and yugoloths in that they advance through different forms. While I do like their next form a lot, it’s still kinda sad that this means that the “main” slaadi are pretty much restricted to only three types, one of which just gets a few extra steps in its life cycle.

Before we move on, let’s stop and make a note on that. In the adventure module “Tales From the Infinite Staircase”, the players discover a huge, chained-up horde of slaadi, all entirely different from one another. As it turns out, their natural state is having hundreds and hundreds of forms, possibly down to each slaad being totally unique, but their gods have restricted them just in case they produce members powerful enough to challenge them. That’s actually pretty awesome. The slaadi are also positively portrayed in this module, something rare for them, fighting against a force that destroys creativity and the will to change. 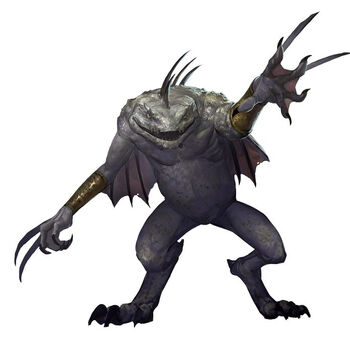 I have very few of my complaints about the green slaad here. I love the little fins on the grey slaad’s upper arms, and it’s interesting to see it growing wrist blades like the blue slaad. However, it is kinda bordering a lizard at this point. They already have prominent claws and teeth, something amphibians aren’t really known for, and the grey slaad looks practically scaly here. The head fins don’t help. I know they’re just to add detail, but they’re so reptilian it’s weird. Green slaad become grey slaad through mysterious rituals they learn over their first century of life, and only continue their evolution from there! 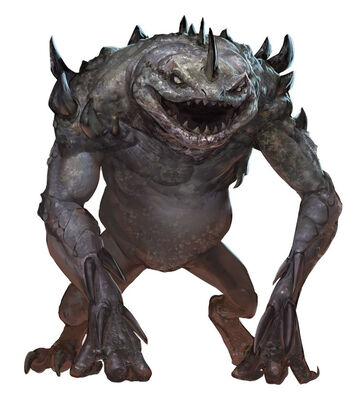 The death slaad actually pushes back on this somewhat, and I quite like the result. The more shark-like mouth feels more properly toad-like and I like the extra two claws higher up on the arm. And can you just imagine this thing moving? Gorillas are scary enough, and they don’t have shark heads and Wolverine hands! Overall, it really does feel like an evolution of the grey slaad… but I really do miss those fins. 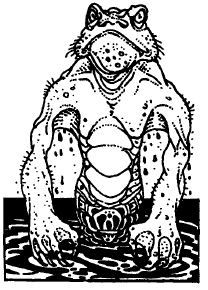 I just wanted to share the first edition version as well because it is glorious. Look at that majestic chiseled chest rising from the water. Flabby and fuzzy, just how I like my frogs. This guy is in charge of the slaad race. It really doesn’t get any more badass than him. Well, sort of. While the death slaad are the leaders of the slaadi (because they’re hardcore enough to beat everybody else into listening to them) they do have two more forms they ascend through. However, neither is particularly interesting. 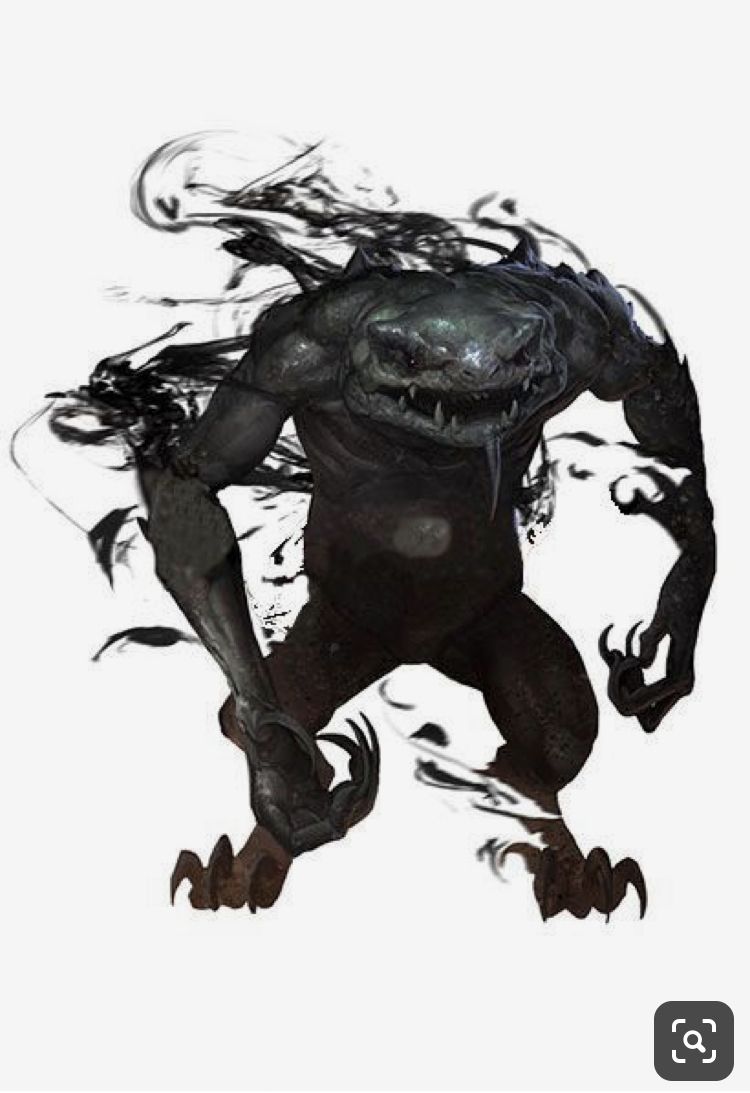 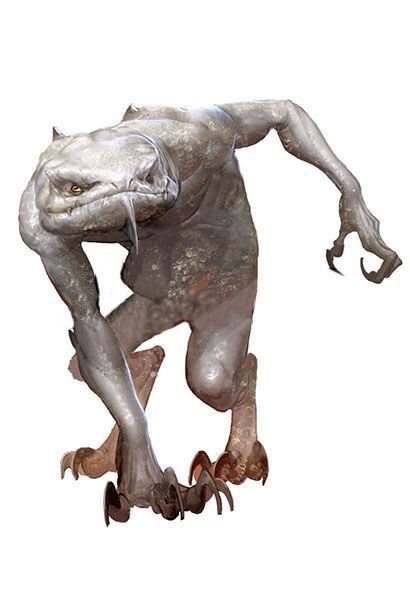 The while and black slaadi have very limited individual artwork and neither has very much lore to talk about either, so I’ll quickly cover them both. I do like how fleshy-pale the white slaad is, and it’s interesting that such a frail, elderly looking creature is actually more powerful than the hulking death slaad it used to be.

This deals with the regular slaadi, but there are a few more extras who sometimes slip through the gaps of the Slaad Lord’s plan to contain the mutations of the slaadi. These are my favorites, and they get really wild.

Visually, it’s hard to say much about the gormeel. This appears to be the only image of them that was ever produced, which is a shame, because they’re one of the most interesting ideas among the slaadi. All I can say is they’re clearly even more like lizards than any of the other slaadi, with clear scales all over their bodies. Not that interesting, but then there’s the lore! In the infinite chance of chaos, sometimes order is born, and that is the essence of the gormeel. The gormeel are lawful slaadi of all things.

Their natures are conflicted, as they are beings born of chaos that desire to provide order. Instead of other slaadi, they prefer to hang out with the githzerai, immigrants to limbo who are more predisposed to order. Really neat, but very little was ever done with them. They only appeared in 3rd edition, sadly. I’d like to see more done with them, maybe with a more interesting design. Maybe make them orange slaadi or something? Purple? I want a rainbow of slaadi, basically. 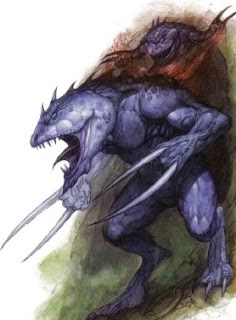 Not technically its own variety of slaad but a template put onto individuals of any type, a slaad spanwer is a slaad that reproduces not the usual way but by budding, youth growing in its own body and ripping free violently. I love the little guy springing free with a little Bowser Jr. grin. They’re going to MCDONALDS after they kill you!

…am I allowed to mention McDonalds in an article right after a picture of a monster bloodily ripping from its parent’s back? 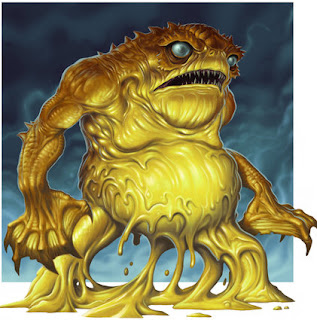 These last two are my absolute favorites, and it’s hard to pick which I like more. The winner in lore and powers is the golden slaad, who really captures the feeling of a being of chaos. This is a slaad who got a little too intimate with the raw forces of chaos for even a slaad’s liking, destabilizing its body. Their “chaos croak” (yes, yes, YES that’s the best name) has random effects on everybody who hears it, such as teleporting them in random directions.

When injured badly enough, they completely lose their remaining stability and become golden slime, fighting with pseudopods. I really wish the art captured that feeling more. This doesn’t so much feel like a Slaad completely losing its physical integrity as much as a slaad who took a bath in honey and is very mad you interrupted it. 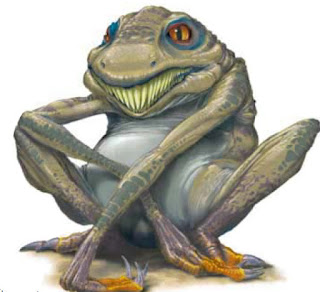 And here we have them. My favorite slaadi. My precious perfect dirt boys. I love any monster that goes for “pathetic” as its main vibe, and the mud slaad delivers pathetic in spades. It even weaponizes being pathetic, and fights by pleading for you not to kill it, screaming so loudly it hurts, and playing dead. How could you ever kill these things? You monster.

It almost reminds me of Croagunk from Pokemon, with the dark blues and oranges and scrawny, scraggly look to it. My favorite feature, of course, is that mouth. That giant, goofy overbite looks so sad and dopey but also like it could seriously bite a chunk out of your arm if you got too close. And if it did, you’d be in extra trouble. Anybody bitten by a mud slaad slowly becomes one. Can you imagine that happening? Your mighty fighter withers away into a cowardly, shrieking, sweet, adorable little toad. Forever.

Some people have all the luck.