Ugh. Jurassic World. I have a lot of things to say about Jurassic World, and not many of them are good. I won’t linger on it too much, but hey, this is the internet! You guys love negativity. I know your game, internet. For Jurassic World the first, let us focus mostly on the monsters.

First, the basics. For those of you who don’t know, Jurassic World is a bit of an unconventional sequel, in that it pretends that Jurassic Park 2 and 3 did not happen, effectively taking place in an alternate timeline where only the first movie’s incident ever took place. Fair enough, really. It would be a lot harder to believe that people would attempt to open a dinosaur park again with the body counts the sequels rack up. Less fair is that this means Jurassic World 1 is a retread of Jurassic Park, but dumber. I’m not going to get bogged down in plot details. Let’s just see what new sights we have to see.

For those of you who don’t know what we’re doing here, see my first article on the subject of Jurassic Park.

Let’s start with the new non-dinosaurs. First, we see that the art style of the series is still the same. This is a very archaic Mosasaurus, rather shrinkwrapped and lacking the tail fin these lizards (actual lizards, not like dinosaurs) had in life, and largely the same color pallet that the original films worked with. Lots of brown, grey, and muted blues. The first honestly stopped bugging me a while ago, like I explained in the first article, and this is the film that firmly establishes that these creatures aren’t actually prehistoric animals at all, not just having their decayed DNA patched up with other animals but purposefully altered for the public’s enjoyment. This will come back to bite them later, but we’ll come back to that. The weak color pallet is pretty awful though. We don’t even have some nice greens thrown in, like the compys and Dilophosaurus.

Anyway, the Mosasaurus! The first movie doesn’t give us a lot of exposure to it, since the main characters have no reason to ever enter the pool it lives in. If it were a more major threat, it could be an aquatic version of the Juggernaut, as it has the size and invulnerability to fill the role. Instead, it is the Crocodile. The Crocodile is a powerful monster that lurks in and attacks from the water, grabbing anything that comes close enough to be devoured.

Usually, the crocodile is a lingering threat, recurring through a work to menace anybody who nears the water, which a main character will be forced to do at some point or another. Here, nobody ever has to brave the waters of the Mosasaurus. It kills some unimportant nobodies in the sequel in a tag-team with the T. rex cause I guess they’re friends after working together to kill the Indominus rex. Stupid, but more personality than we get out of most of these, so I’ll take it.

Oh, wow, that looks awful. They weren’t kidding about these not being the actual animals, cause that’s not a Dimorphodon, that’s a dragon. They’re also huge, like a good-sized dog, compared to their rather small real-world counterparts. And I have no idea what’s going on with that head. That’s just… that’s something.

Okay, whatever, let’s look at their behavior. Well, when released from their enclosure, they are… immediately mindlessly aggressive. Like, way more than anything in the original movies, they’re immediately divebombing a crowd for no reason. Must have been feeding time. They don’t really fit a particular archetype I can think of because their behavior is so undefined. They simply divebomb and attack with meaningless aggression. I suppose they are somewhat of an aerial Swarm, although their individual attacks are enough to kill a human. Can’t say I’m really impressed with their use. Oh well, there’s always more! 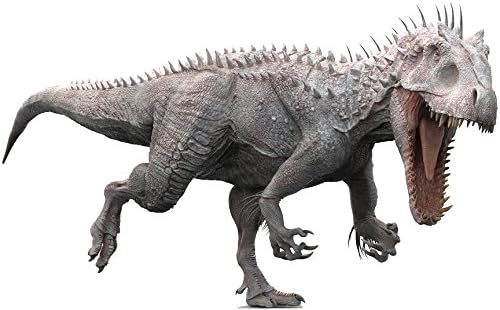 Oh, god. You. No, okay, this time, I’m going all in with ripping on the design. For those of you not in the know, Indominus rex is not a real dinosaur, and not in the way everything else isn’t a real dinosaur. It’s an all-new creation of InGen, spliced together from multiple dinosaurs to create something, bigger, smarter, and more impressive. Everything about this is stupid, starting with the reason. First, people are apparently losing interest in dinosaurs, which is… stupid? Zoos have existed for hundreds of years just fine.

Second, if you’re going to promise me a combo dinosaur, do better. Take away the incredibly stupid-looking humanoid arms and everything else about the Indominus rex is just like any other Jurassic World theropod, down to its boring grey slate color palette. You’re combining things’ genomes! Give me a Resident Evil mutant! Top its head with triceratops horns and a frill, give it a beak, give it wings! Just make a dragon, basically!

Okay, fine, the role. So the Indominus is the Pack Leader. It commands other monsters, in this case, the velociraptors, and gets extra tricks on top of it. Tricks like, well, magic. There’s a question about fiction, whether an author can actually write a character more intelligent than themselves, who can think at a higher level than they do. Sherlock Holmes is a brilliant detective, but Arthur Conan Doyle was rather famously gullible. The writers attempted to make the Indominus a smart dinosaur, but because they themselves weren’t that bright, they could not actually pull it off.

Every attempt to show how intelligent the Indominus rex is comes across more as showing how great its mind-reading powers are. Twice the Indominus fools technology it should have no way of knowing the function or even existence of. First, it hides its heat signature from the heat trackers placed in its exhibit (placed there because it can turn invisible, which is agonizingly stupid as well). Later, it removes a tracker from its back to lure in humans hunting it. How could it know the function of a device that was embedded in its body its whole life, not impacting it in any way until it left its enclosure.

On top of that, it can communicate with and command the raptors. How? Sure, it has raptor DNA, but communication is learned. Birds that aren’t raised by their own species don’t sing the right song, because they need to learn it. Indominus would be capable of raptor-like sounds, but they wouldn’t mean anything. What a mess. But at least it has a role that wasn’t filled before, and a good one at that.

That’s more I can say for Jurassic World II’s dinosaurs. See you next time.