Ah, the wild north. A land with unending nights and bitter cold, only thinly occupied by humans, it’s perfect for monsters of every sort. And yet most of my readers in the south are only familiar with the beasts around them. Common city goblins, park-dwelling harpies, the trolls under 3rd street bridge. These are all fascinating in their own right, but the children of yesterday knew the woods, the fields. I remember my first time spying a lake monster while fishing. Its magnificent mane, that smell of soggy horse that you just never forget. Everybody my age has seen something like that at least once in their lives, but things have changed. So many children today are too deep in city centers, not even near an adventuring guild that will send them outside once in a while. So, show your children my work and we can explore together the last great wilderness. 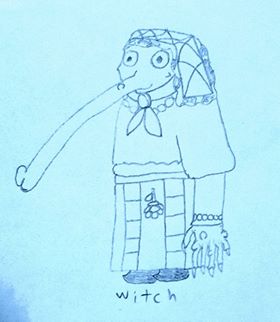 Most children are familiar enough with witches. Many cities have a small, friendly population that harmlessly gather mushrooms and sleep in duck ponds, selling their wares to apothecaries and only rarely eating children, and even then usually only ones who ignore the warnings not to disturb them at their work.

The witches of the north are quite similar. Like the traditional Forest Hag and Swamp Hag, Winter Hags are amphibians, and dwell deep in the swampy forests of the north. While most of our witches are brown or green, Winter Hags are blue as the sky, and instead of tall and lean, they are squat and froggy.

Winter Hags, living far from human settlements, enjoy their solitude more than most standard witches. They do not form covens and will put up wide fences to keep other sapient races away from their homes. The only time they seek companionship is when they need to breed, requiring stimulation from a male of any species in order to lay their eggs. For this purposes, they often recruit ogres, who are not picky.

They mostly eat aquatic animals like fish and snails, with a particular fondness for frogs, and during the winter, they often retreat to underground chambers beneath their huts and go into long states of torpor, broken only to guzzle stockpiles of dried and smoked foods.