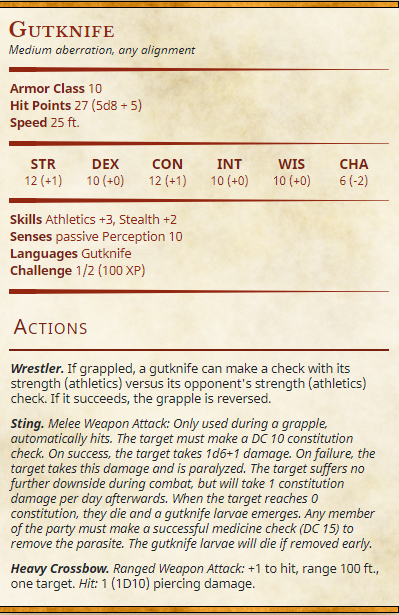 Only found near sources of surface water, fresh or salty, these strange creatures are little-known and reclusive. They range from about 5 to 5 and a half feet tall, although on average they weigh more than humans due to their dense bodies. Their skin is red, ranging in shade from brick to cherry, and tends to be moist. Most of the time, they keep to themselves, living in simple villages alongside rivers, lakes, and seas, rarely with more than 50 adults. Most of them practice agriculture, often supplemented by foraging, with the occasional hunting party for the purpose of reproduction.

While they are very vaguely humanoid in shape, this biology is what makes them aberrations of the highest sort. Rather than reproducing normally, gutknives implant embryos in other living things through the stinger in their belly. Usually, this is done to large forest animals, but some more isolated gutknife tribes will happily sting other sapient beings, and all will do so during times of war. Gutknifes have a love of wrestling, frequently training in it for entertainment and battle purposes. Stung prey is drug back to camp and left near small pools, made for their young. 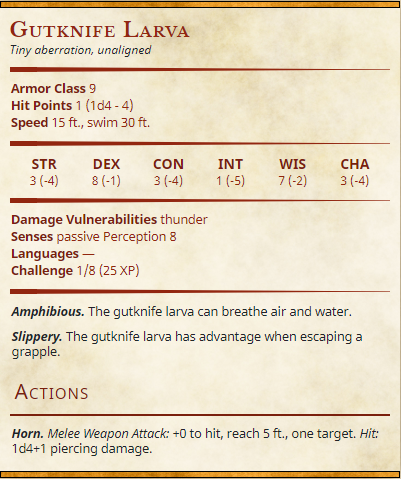 A gutknife is born as a larva, sawing its way out of its host’s body under their ribcage with its long horn. Upon emerging, it immediately seeks out water. Under normal circumstances, it will live in peace in its tribe’s pool until at about 1 year old, it enters a cocoon and metamorphosizes into a child gutknife, identical to an adult but for its size. Adults bring them food and rarely allow them into larger bodies of water for a time. Before metamorphosis, they are largely seen as interchangeable and not people, and less than half will make it that far. They are not even named before they emerge onto land. 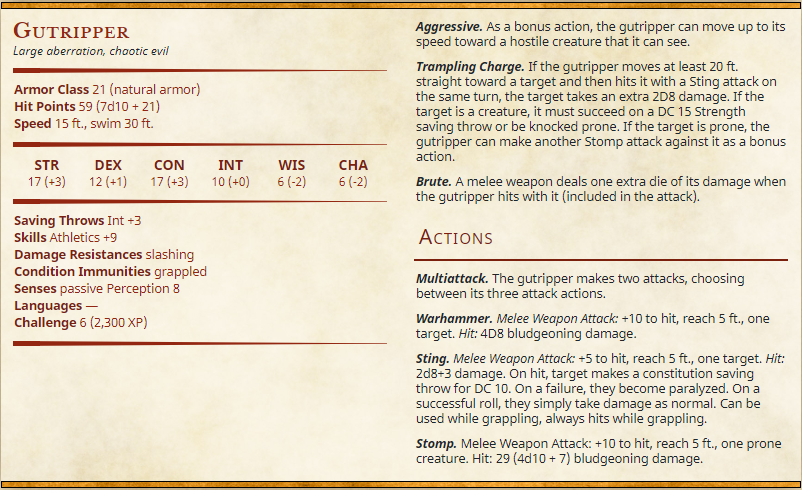 When a gutknife implants its embryo, it does not matter what it is implanted in, the result will always be a gutknife, with one exception. If a gutknife stings another gutknife, the larva born will grow up to be a gutripper. Due to their sterility and mental instability, not to mention the act of killing another gutknife, the creation of gutrippers is usually seen as taboo, and only done in any great number by vicious expansionist tribes. This, combined with the naturally more aggressive mind of the gutripper, leads to most of them being evil, although if raised properly, they can turn out as good as anybody else.

Physically, a gutripper is significantly larger than any gutknife, usually around 8 feet tall, and hairier , yet still as slick with slime as any other gutknife. Due to the structure of their body, they cannot use a weapon in two hands, and prefer to keep one open to grab foes and impale them upon its stinger anyway.

While most gutknives prefer to shoot crossbows from afar and only attack up close with their stingers, a gutripper will nearly always fight in head to head combat, making full use of its prodigious strength and fierce stinger to dominate combat at close range. They cannot implant embryos, but they can inject the paralyzing cocktail of venom that comes along with it in other gutknives.

Correction: Gutrippers speak gutknife. CR should probably be closer to 2 or 3 than 6. I make no promises that any of these numbers are good. If you actually want to use these, you should probably alter any numbers here to make sense.