Most major cryptids have, at some point or another, been identified as supposedly-extinct animals living among us. Nessie and fellow lake monsters are often declared to be plesiosaurs. Mokele-mbembe is supposedly a late-surviving sauropod. The former existence of Gigantopithecus has been cited as evidence of bigfoot. Of course, all of these are horribly flawed. There’s not really any reason to suppose that Gigantopithecus of any species were bipedal, and the plesiosaurs and sauropods the supposed ancient reptiles of the remote wilderness take after are those of the 1800s, pulpy monsters with impossible neck postures and unlikely habits.

However, one creature supposedly left in the past may very well live among us. Since the thylacine, more commonly known as the Tasmanian tiger, went extinct in 1931, there have been rumors that it is actually still extant, hiding in Australia’s vast wilderness. To explore the possibility that this animal still exists, it’s best to start on what it was and what forces drove it to extinction. The Tasmanian tiger was really a lot closer in appearance to a canine, but of course, it wasn’t that either. The thylacine was a marsupial, part of a group of predators known as the thylacinidae. Most of the members of this group were rather small, the modern thylacine being one of the largest, and even then it was only slightly larger than a coyote, between 40 and 70 pounds and about 2 feet tall at the shoulder.

Of course, while on the surface they resembled wolves, they were still very much marsupials, and as such very weird anatomy. My personal favorite thing about the thylacine is just how weird that tail is. Carnivoran mammals just don’t have tails like that, super long and short-haired, more like a kangaroo. Apparently, they could stand on two legs for a while. And of course like any marsupial, they raised their young in pouches, backwards-facing in their case. Unlike most marsupials, the males also had a pouch, into which they could withdraw their testicles for protection. That’s unfair. That feature was available and humans didn’t get it?

The last detail of the Tasmanian tiger’s anatomy is quite a tragic one in hindsight. You’ll notice here that their jaws can open freakishly wide, a beautiful sight but telling of a relative lack of jaw musculature. There is often a trade-off between large gape and jaw strength, and thylacines chose the first. Their jaws were likely too weak to kill larger prey, limiting them to small animals like wallabies and ground birds. Despite this, they were blamed for the death of colonist’s sheep and bounties were put on their heads. More likely, sheep were being lost to simple incompetence, trying to raise sheep in a European fashion in a climate not suited for it.

Humanity’s direct attacks on the Tasmanian tiger were likely only a small part of its extinction. There was also a changing environment as the landscape was reshaped for agriculture and livestock, and wild dogs introduced by Europeans did not just compete with the tiger but spread new diseases. The last tiger to die in the wild was shot in 1930. The last one in captivity died in 1936, two months after protections were finally passed for the species. They had already been extinct on mainland Australia for the past 3,000 years or so. Or at least, that’s the official story.

There’s a lot of reasons to believe that the Tasmanian tiger is still alive, or at least was for several decades after its official extinction. Starting with the animal itself, its behavior, what little is known of it anyway, is good cryptid material. They were known to be largely nocturnal and rather shy, tending to avoid humans whenever they could. Most animals habitually evade human contact to some extent, but several have lifestyles that lead them to cross paths with us. It appears that this was not the case for the thylacine. Unlike wolves, thylacines did not appear to hunt and move in large groups, making it even easier for them to go unnoticed. They were most likely ambush predators, capable of stealth and a short burst of speed to capture prey.

Of course, geography also helps. Thylacines used to be present in New Guinea, Australia, and Tasmania, and their current sightings come mostly from areas they are known to have lived in the latter two. In particular, most sightings in Australia are from the western coast, where their remains are frequently found. The first sighting was in 1936, the year the thylacine supposedly went extinct, and from then until 1998, there were 202 more sightings in Western Australia. This is not a lot, not at all. By comparison, since Bigfoot sightings started to be reported, 2,032 were recorded in Washington alone.

Now, there’s a lot of things that make that comparison a little tricky. A bigfoot is a lot bigger than a thylacine, bigfoot researchers aren’t really great at filtering their reports for accuracy, bigfoot being more well known makes people more likely to see it, whether it exists or not, and of course, Australia only has 25 million people across the entire continent, and had less than 20 million when my data ends. That is a lot less eyes looking for thylacines.

Let’s face it, sightings are not enough. Humans will see literally anything, with no regards as to its reality. You can  convince people that they met Bugs Bunny at Disneyland and totally invent an entire memory around it. That’s literally impossible, more than bigfoot taking you to his UFO for a swing around Saturn. Instead of unreliable human recollection, we need something that can’t be mistaken for anything. Pictures, tracks, a body. Do we have any of those?

Why can nobody get a decent image of an unknown creature? Still, this is about the best there’s ever been, and it’s been convincing to several people. This image is part of a video taken by a Southern Australian woman in 2008, although the footage was released later by the Thylacine Awareness Group of Australia. Even fuzzy, it’s pretty convincing! That long, thin tail, that weird gait! What else could it be?

Well, unfortunately, I have to go with Darren Naish that it’s a fox with mange. The tail looks good, and the gait is weird, but unfortunately, the proportions are wrong. The hind legs of a thylacine are completely different in structure, with a very short foot. And as we see here, a mangy fox can completely lose the bush of its tail. 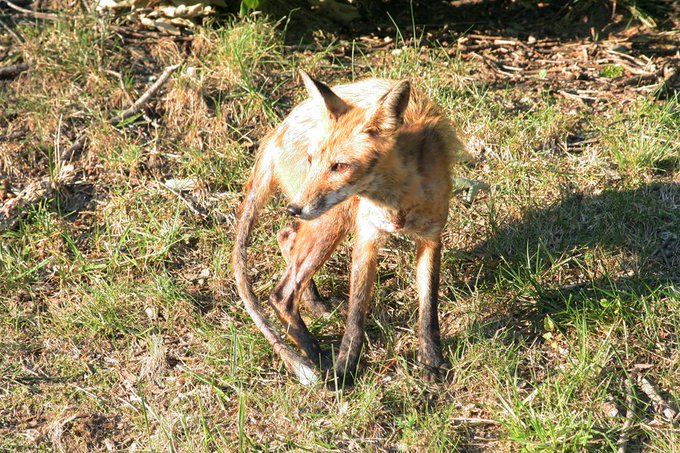 Several other photos of thylacines appear to be similarly mangy foxes. Foxes are common in Australia, and mange seems to be common among them. Other photos appear to be tiger quolls, one of the closest remaining relatives of the Tasmanian tiger. Footprints are little help either; while the thylacine had extremely distinct footprints, this is only known from taxidermied specimens, not living individuals. A real animal’s footprints can be quite different. Bodies would be hard to come by even if they did exist. Tasmanian devils are fearsome scavengers, quickly processing nearly anything that dies on their island.

The persistence of the Tasmanian tiger to the modern day is a frustrating conundrum. Perhaps it did life on until the 50s, the 60s, even as recent as the 80s or 90s, and perhaps it lives today, but the evidence is thin on the ground. Photographs are inconclusive, sightings are just as unreliable as any other cryptid. An entire nation mourns the Tasmanian tiger, another victim of human carelessness with its surroundings, and the chance that maybe we didn’t kill it off really does speak to a very human desire for absolution.

I want to believe, but until something better comes along, the Tasmanian tiger only lives on as a warning.