Cryptids as we know them are largely a modern phenomenon. To us, a cryptid is often a special, singular animal. While many people work to make cryptids accepted as ordinary animals we just don’t know about yet, nearly all of these mysterious creatures are heavily associated with the paranormal. Bigfoot is often seen paired up with UFOs, Nessie takes on a thousand diverse shapes and exists without detection in a space where such a thing should be impossible, and Mothman was associated with disasters and reported as flying faster than a car could drive, all without moving its wings. In addition, they live among us, just out of sight. I live within walking distance of several forests where bigfoot sightings are totally viable.

Medieval people didn’t have that kind of split. The supernatural wasn’t something disconnected that you could encounter once in a while. It was ingrained thoroughly with the mundane. God was omnipresent after all. Weather patterns, disease, fortune and misfortune were all subject to supernatural whims. On the other hand, sightings of strange beasts were relatively rare. Most unnatural creatures were distanced from the homeland of those who invented them, either by time or by space. Africa and Asia were populated with all manner of baffling creatures, including the bizarre cynocephali. Cynocephali wearing golden oxen on their heads, as reported by Odoric of Pordennone.

The earliest descriptions of the dog-headed men come from Classical Greece. India at the time was at the very fringes of Greek knowledge, the furthest point of the world they had knowledge of. Ctesias, one of the first writers to speak of the cynocephali, placed not just them but many strange peoples in India. There are also supposedly pygmies, who aren’t just small but have miniature livestock: “Their sheep are no bigger than lambs, their oxen, asses, horses, mules, and other beasts of burden about the size of rams.”, he claims. Manticores and unicorns are also apparently frequently seen in India. The cynocephali themselves are placed in a mountain range, unnamed by Ctesias, where he gives them the codifying description that would be used by many in the future.

“They speak no language, but bark like dogs, and in this manner make themselves understood by each other. Their teeth are larger than those of dogs, their nails like those of these animals, but longer and rounder.”

Despite lacking human language, (notably, it is never considered that their barking counts as its own language) they are identified as thinking beings. They wear furs and trade with humans, and even raise sheep. Ctesias describes the cynocephali as totally peaceful, a detail that would usually be kept in later accounts. He also claims there is an Indian name for them; calystrii, for dog-faced. This doesn’t match any words in Hindi, but perhaps those more versed in linguistics can come up with an origin for the term. Perhaps more likely, he invented it to grant legitimacy to his claims.

You can see a cynocephali in the far left of this medieval map, along with various other abnormal peoples.

Medieval Europeans copied the various “monstrous races” invented by the Greeks, placing them in the lesser-known quarters of the world. However, with a new Christian worldview, there were new questions around their exact nature. In the Greek religion, it really doesn’t matter if the cynocephali are human or some other sort of being. However, if you’re a Christian, humanity is singular, the only ensouled beings on the planet. If cynocephali are human, they have souls that require saving.

One of the earliest Christian writers to tackle this situation was Saint Augustine, a massively influential theologian from the late Roman period. As a Christian, he has a very strict division of man and beast that is confused by the cynocephali, what with its doglike head. However, he decides that they and other, even stranger beings would count as humans if they are descended from Adam, no matter how strange they are. He even points out known birth defects, logically surmising that if they are human, so are the faraway monsters of the world.

Saint Christopher, more like a really horrifying horse than a dog.

The cynocephali found a place in Christian iconography representing the most distant of foreigners. India remained a distant, poorly-known place even as Christianity penetrated Ethiopia, and the dog men the most distant people to remain there. More interestingly, Saint Christopher is often depicted as a cynocephalus in Orthodox Christianity. Saint Christopher was a massive man who gained his title by bearing Jesus over a dangerous river, unaware of his true nature. It seems that he gained his canine countenance from a simple spelling error, spelling the Latin Cananeus, for Canaanite, as canineus, for canine.

With this, we see a new face to the dog-faces. Traditionally portrayed as peaceful, Walter of Speyer turned them into man-eaters, with Saint Christopher being turned from their brutal lifestyle by the appearance of Christ. While it distances them from “regular” humanity by making them monstrous in behavior as much as appearance, it also strengthens their connection to other humans by showing that they can be saved, the distinguishing feature of humanity in Medieval Christian thought. 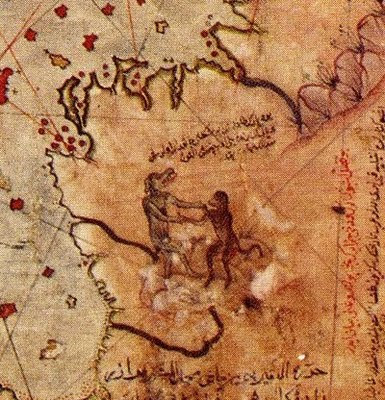 A portion of the Piri Re’is map depicting cynocephali, drawn 1513.

As the Age of Exploration kicked off, the cynocephali did not die out entirely. They were soon relocated to the New World, such as the dog folk above depicted in South America. Unfortunately, here’s where the unpleasant political uses of monsters raises its head. The debates on what makes something human that applied to the cynocephali in the middle ages now applied to real-world humans. Drawing upon ancient ideas of what defined humanity, European conquerors declared native tribes to be animals in need of civilization. After all, many of them went about effectively naked, didn’t practice agriculture, and practiced no religion. It did not matter that these descriptors were often totally inaccurate. Many civilizations in the Americas practiced extensive agriculture, plenty wore elaborate clothing, and pretty much all of them had religious beliefs of some sort. It didn’t matter either that none of those are actually hallmarks of human reason. The excuse was made. 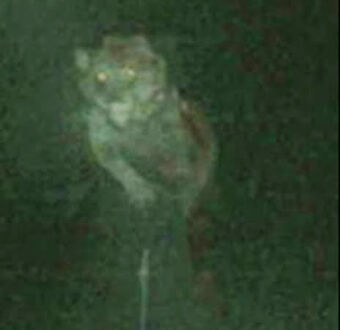 Unusually, the cynocephali is a cryptid people still see today, in a variety of roles. More “mainstream” cryptozoologists mostly believe in a more beastly dogman, effectively just a canine-themed bigfoot. This version is usually portrayed as entirely nonhuman, with no tools, clothing, and culture. They aren’t as mainstream as bigfoot of course, likely in part because it’s difficult to claim some scientific basis to them. An upright ape is not too unusual. An upright canine is absurd on another level.

A fake image of a dogman in Argentina. The dogman is actually Remus Lupin, a werewolf from Harry Potter.

On the fringe of the fringe, cynocephali are more popular, and often retain their nature as fully sentient beings. Usually, they draw upon the same sources that we have for this article, but they take them totally seriously. Instead of recognizing the strange people of faraway lands as wild exaggerations, paired as they were with manticores and unicorns, they see these reports as direct evidence. They also point frequently to dog-headed Egyptian gods like Anubis, which is even more strange as evidence given that most Egyptian gods have unusual features, with no indication that this means they were supposed to represent a real race of dog-headed beings. People on this fringe often tie the dog folk into the great flood, saying that they must have been genetic experiments, explaining the statement that “all flesh is corrupted” in Genesis. 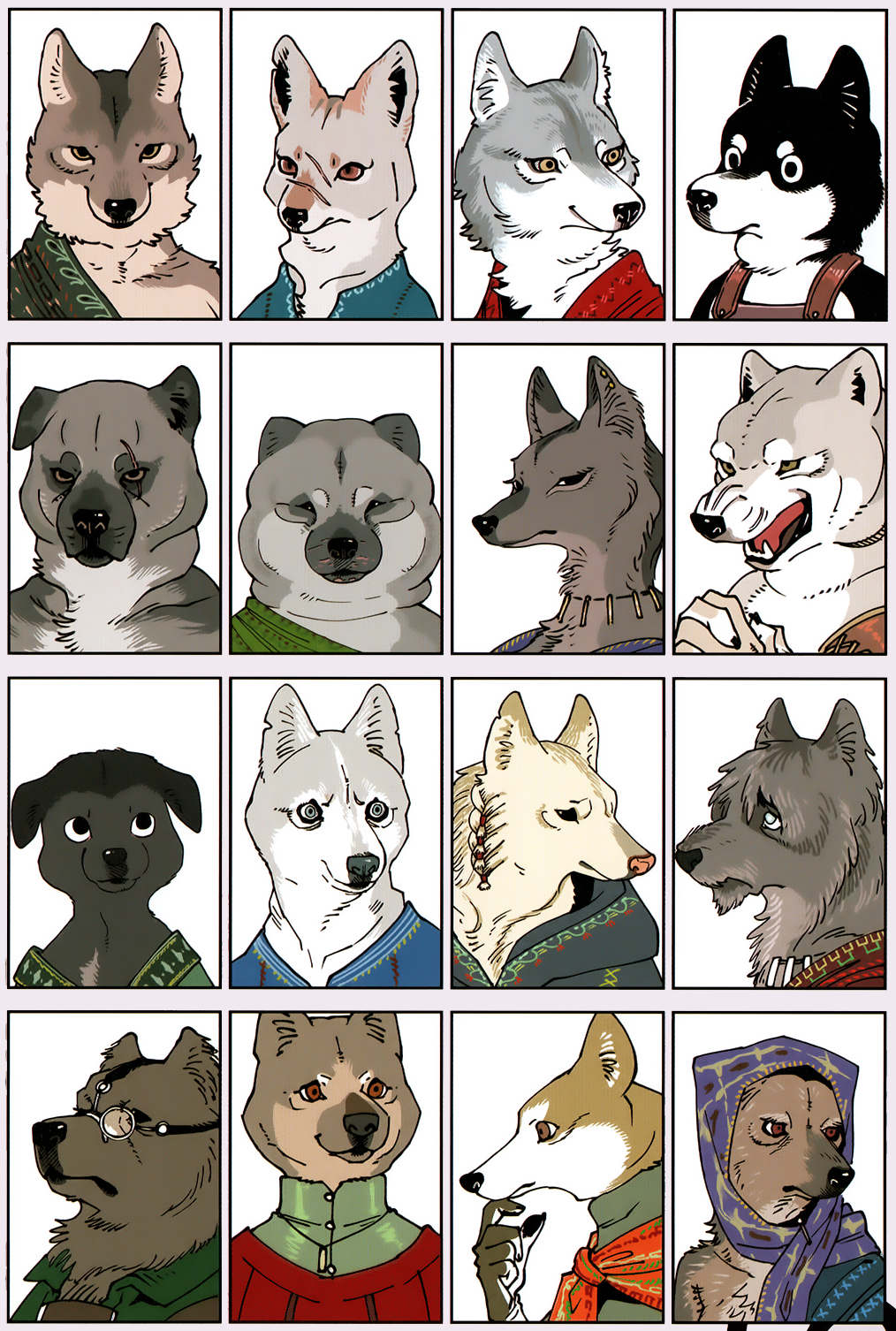 Despite being popular for literally thousands of years, cynocephali are uncommon in fiction. This might come down to the clunky name. My favorite dogfolk I’ve seen in a major work are the kobolds of Dungeon Meshi, which have a rather circuitous origin. Dungeons and Dragons, in its first edition, portrayed kobolds as some sort of dog-dragon combination. Japanese fantasy latched onto the more doglike appearance, reinventing cynocephali for a modern era, and with a whole range of diversity and flavor that the ancients couldn’t have comprehended. I personally hope to see more in the future, drawing upon their long cultural tradition. They could represent the most distant parts of the world again, just like they did in the days of Ctesias.