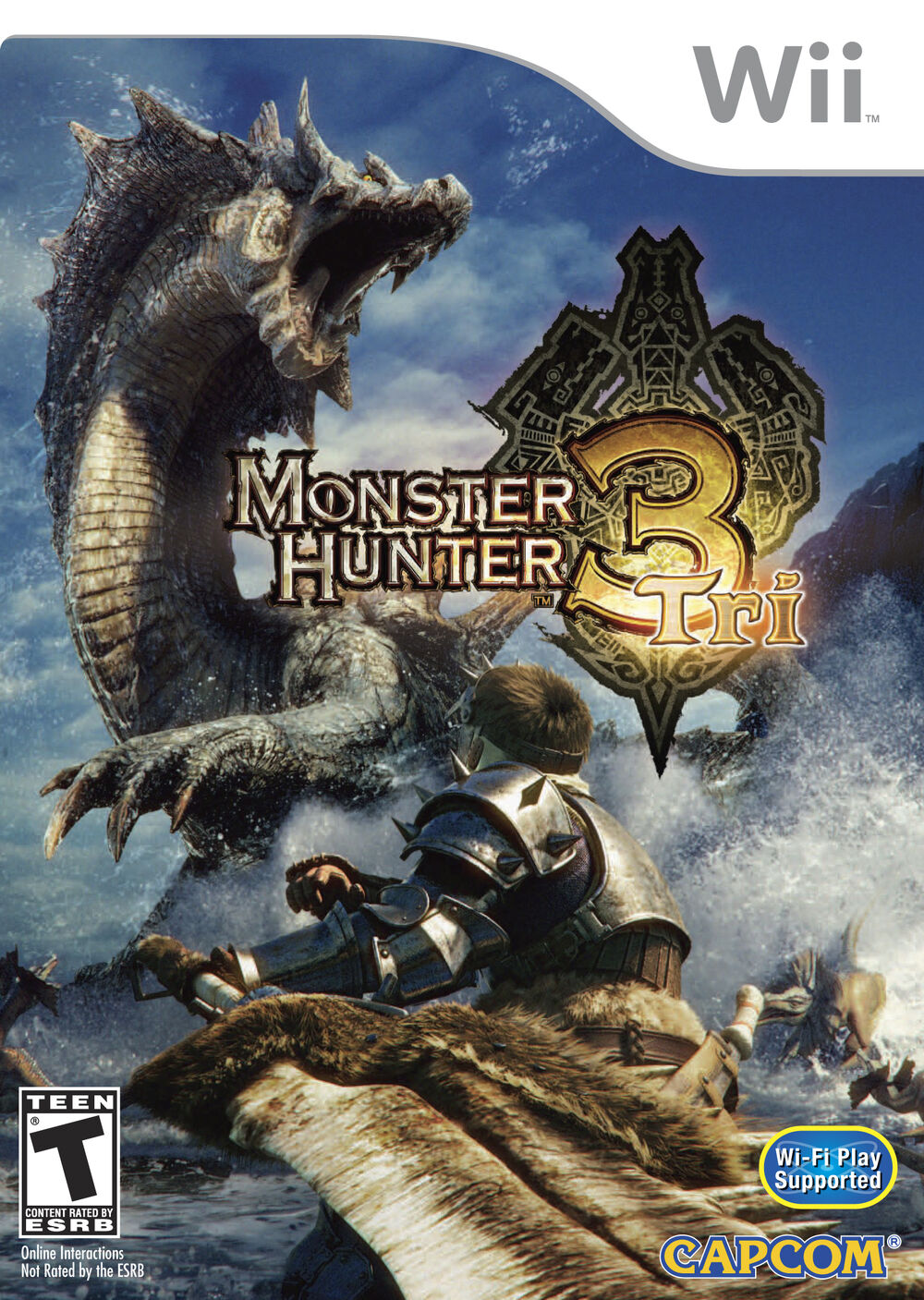 The third generation of Monster Hunter is special to me. Tri is the first of the series I owned, and Tri Ultimate is the first I ever got anywhere in, thank you very much constantly breaking Wii classic controllers. While 2 had added several types of new monsters and a few new weapons, Tri opened up the oceans for our exploration, adding swimming mechanics. This brought on a wave of amphibious monsters that you fight both on the land and in the water. While these water battles were widely disliked, this does give us a lot of interesting new monsters that didn’t get much coverage later, making this a rather singular entry in the series. 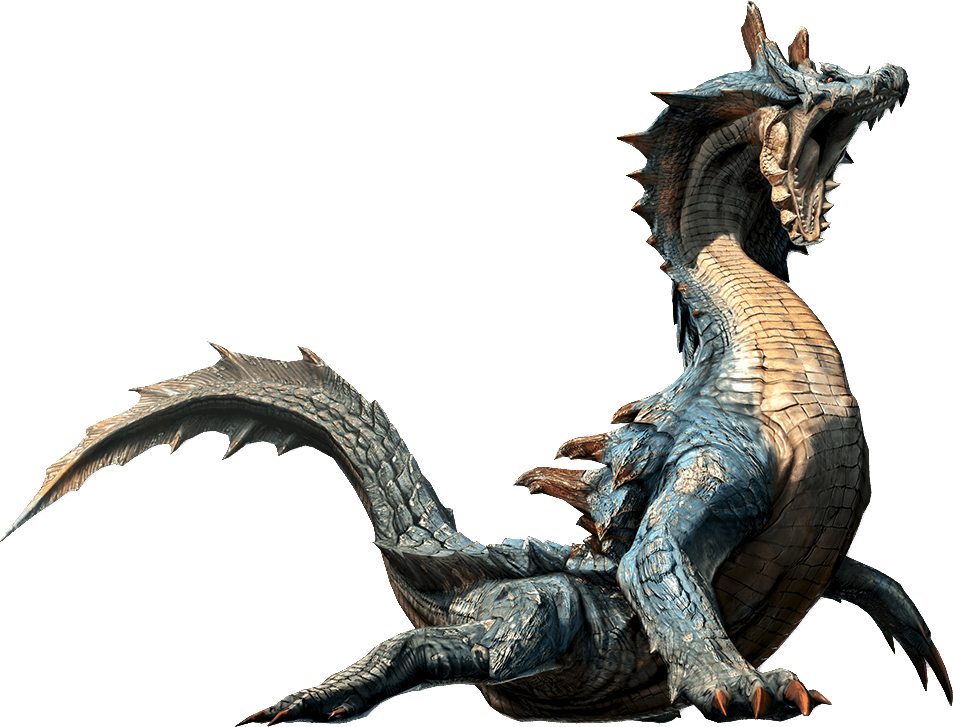 Lagiacrus is a good example of Tri’s aquatic identity, being the flagship monster of its generation. It’s a rather standard example of the new enemies known as “Leviathans”, amphibious reptiles presumably related to the common dinosaur-liked wyverns. They’re not particularly interesting, basically just a long-necked crocodile with horns, but I like the hood, and it’s a good starting point for talking about this generation. 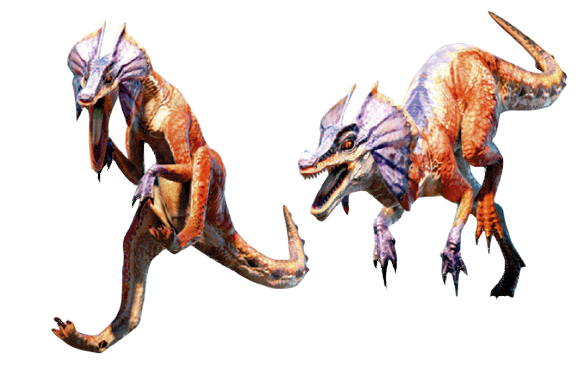 The old raptor-like monsters of the older games were replaced in Tri with the Jaggi family, which is interesting mostly for the ontogeny (the growth and maturation of a species) of the Jaggis themselves. These colorful fellows are juvenile male Jaggis, the smallest and most numerous of the species. They live in large groups, presumably kicked out when they get older and larger. 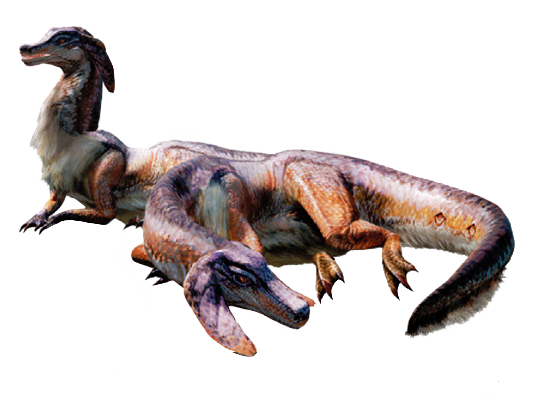 Female Jaggis are called Jaggia, and are significantly larger than the juvenile males. They are my favorites of the group, with a little more feathery fuzz and endearing ear-like frills. They’re super cute! They presumably form a harem for the alpha male of the group, and usually stay near the nest. 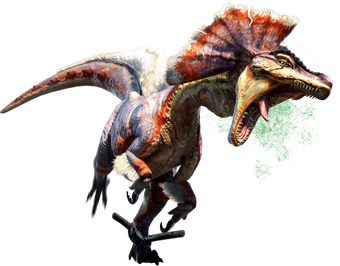 The Great Jaggi is an adult male Jaggi, built more like a Jaggia but far larger. It’s not particularly interesting, but I love the species lore and the implications of it. Presumably Great Jaggis work much like lions, competing with other males for harems of Jaggia and kicking out their sons when they get large enough to challenge them.

Two close relatives of the Jaggi appear in this generation, first of them being the jungle-dwelling Wroggi. The Great Wroggi has a delightful throat sack that it fills with poison, but its most interesting feature is that tail. With fins and a barb, it’s like it has a whole stingray for a tail, really getting across its venomous nature. 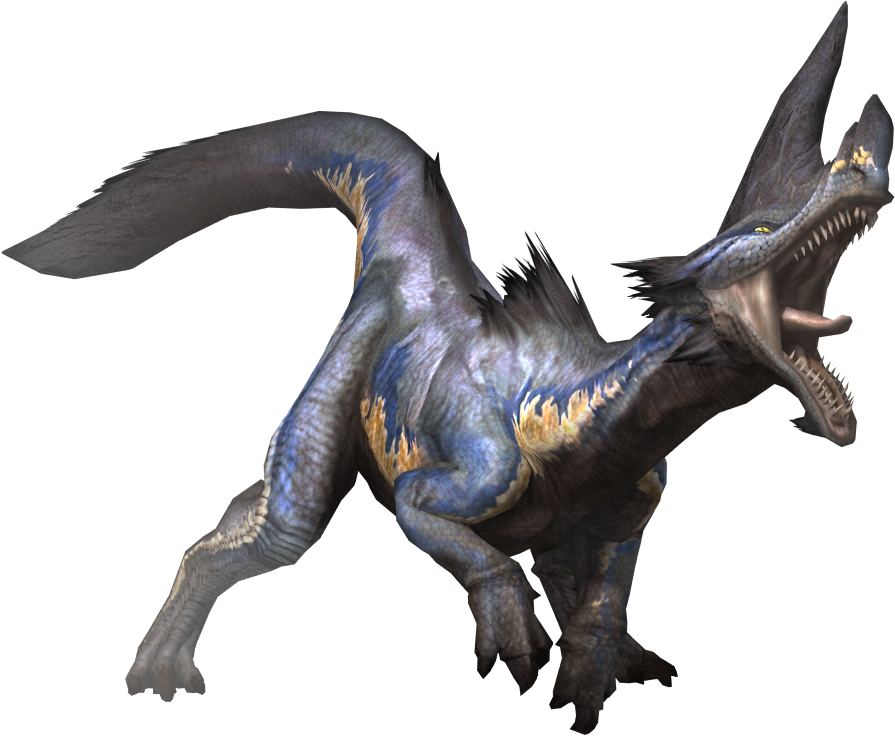 In the cold mountains, there are instead the Baggi. They have a bit more “fur” and a strange, paddle-like tail, but my favorite thing about it is that head. Its horn looks like a pompadour and its hair like big mutton chops. As somebody who has seen more than one anime, this immediately makes me peg the Baggi as a punk delinquent. That cracks me up.

Gigginox is somehow still a wyvern despite apparently being jawless, a strange winged combination of gecko and lamprey. I love the symmetry of its head and tail, nearly identical. Like a leech, it can use its tail as a suction cup, hanging from the ceiling as depicted above. It’s a neat detail to its biology. 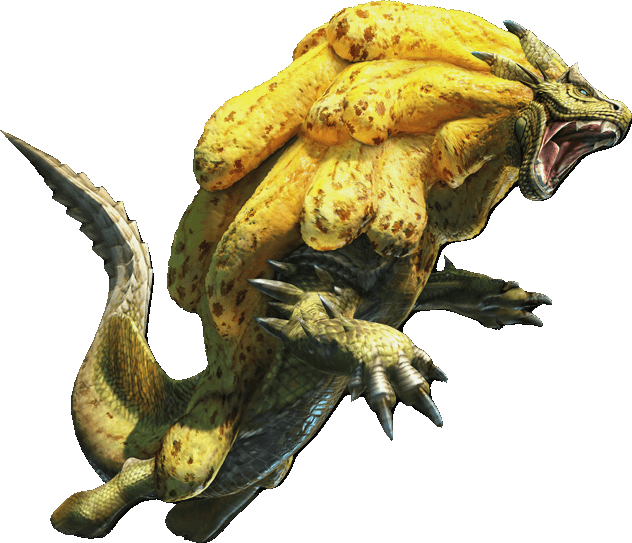 Another Leviathan, the Royal Ludroth is mostly interesting for its spongy mane, which it uses to soak up water that it can use for attack. That’s an amazingly cool detail, suggesting either that it somehow evolved spongy flesh or formed a symbiotic relationship with its own mutualistic sponges. I also find its teeth very interesting, looking more like the plates of a Dunkleosteus than actual teeth. 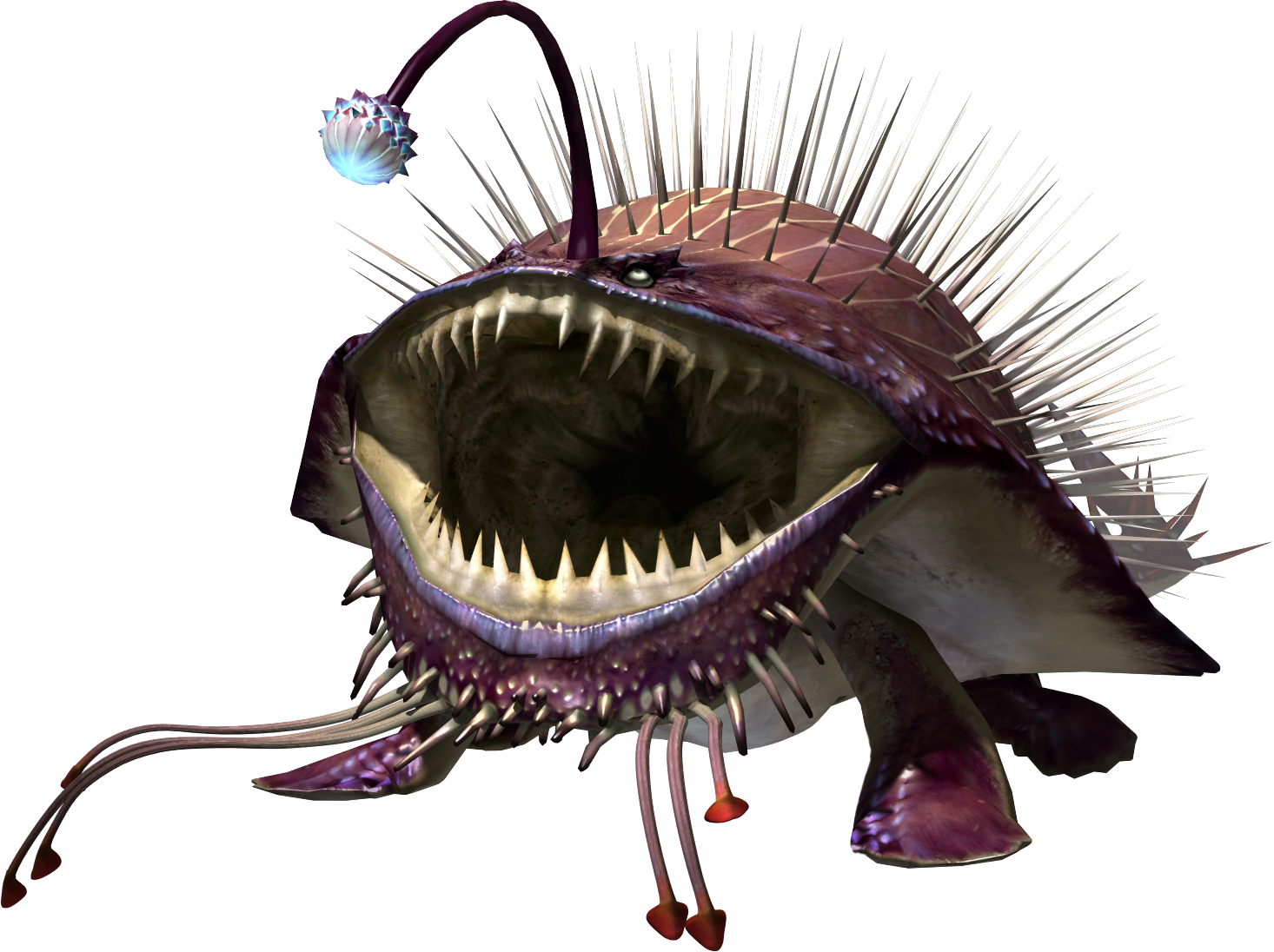 Gobul is great. It resembles many real-world walking fish mixed with anglerfish, although as a Leviathan, it is in fact a reptile, although it looks more like an amphibian. Its angler bulb is very cool, almost looking like a dormant flower, but its coolest features are those whiskers on its chin. They exactly resemble the plants that grow in the rivers where Gobul is found. Gobul will lurk underground, sticking those whiskers up so that they are all that shows. Presumably these plants are fed upon by underwater herbivores, and Gobul uses mimicry to lure those in and devour them. The last Leviathans we’re covering in this article are not aquatic at all, using their adaptations for swimming to instead travel through other mediums. Nibelsnarf swims through sand, and as you can guess from its lack of eyes, enjoys burrowing. It’s a simple design, but one I appreciate, with a nice big maw for swallowing anything and everything it meets whole.

Edit: Nibelsnarf actually does have eyes, as well as gills that it can unveil from the sides of its head! The eyes are on top of its head, giving it more of an early tetrapod vibe, and its stomach is multi-colored, a feature I didn’t see in any pictures! I like it quite a bit more now! 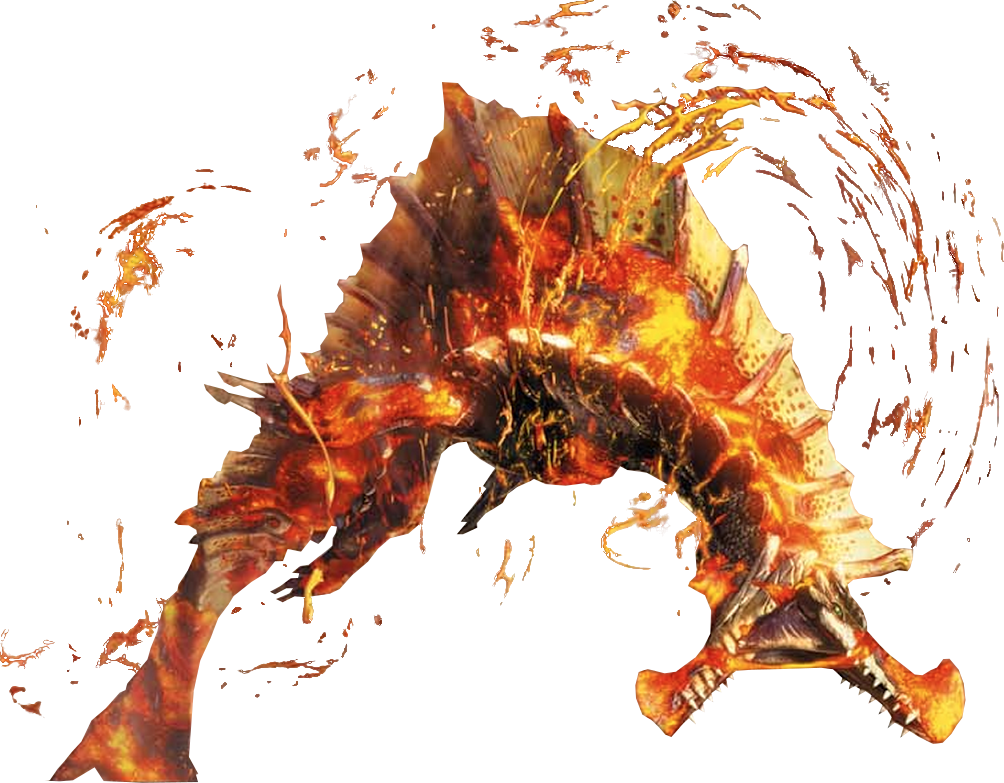 Agnaktor on the other hand swims in lava, which is even less realistic than swimming in sand but just as awesome. Agnaktor would be quite striking even if you put it in the water, with a bony spine and a beak like many pterosaurs. It has a bit of Spinosaurus in it, something I will always approve of. 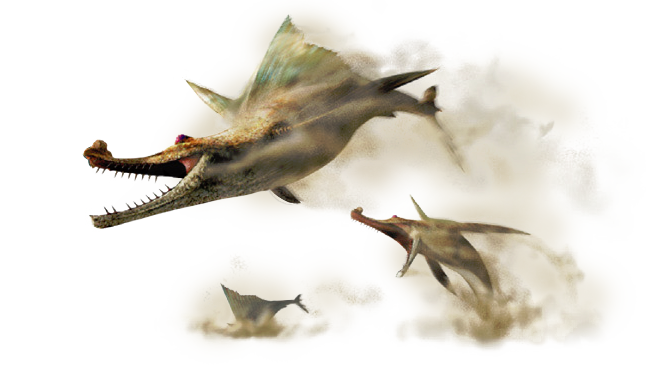 Delex is not a leviathan but a piscene wyvern, and my favorite of the category. It resembles a sailfish, but distinctly reptilian with a gloriously crocodile-like head with eyes on top and even bumps like a male gharial on the tip of its snout. Adorable and even pretty realistic, but for the fact it swims in sand instead of water. 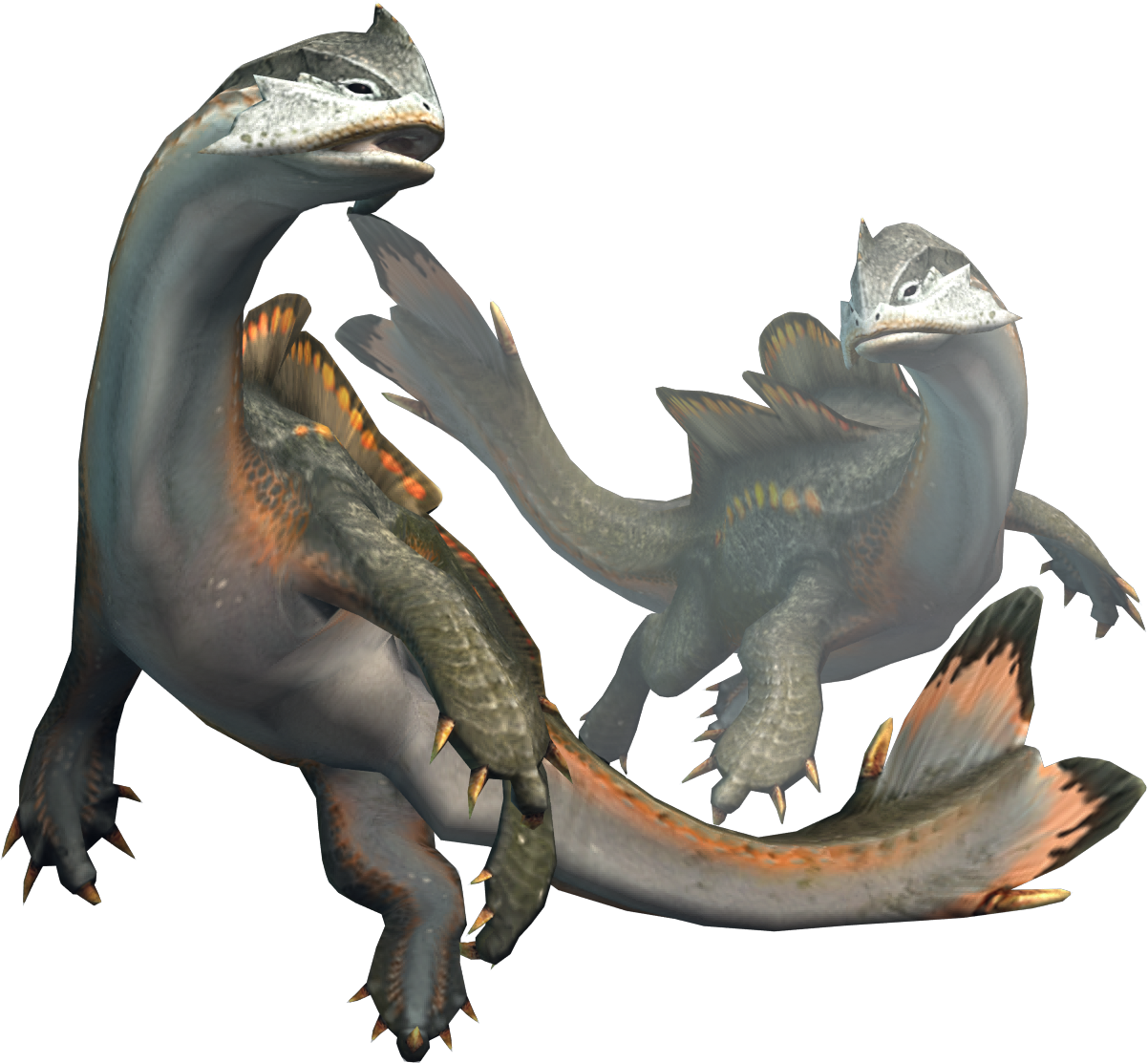 While counted as Herbivores instead of Leviathans, epioth are likely related to the latter, although they are fully aquatic, unable to come onto land. Presumably, that means that there are Leviathans who we simply never see because they live in the open ocean, never coming to shore at all. Epioths are both cute and beautiful, carrying a Nessie-like air of mystery and wonder when you first see them paddling about on the surface of the water, watching from from a distant shore. Once you get a close look, they continue to be strange and beautiful, with an unusual and wonderfully marked face and several fish-like fins. 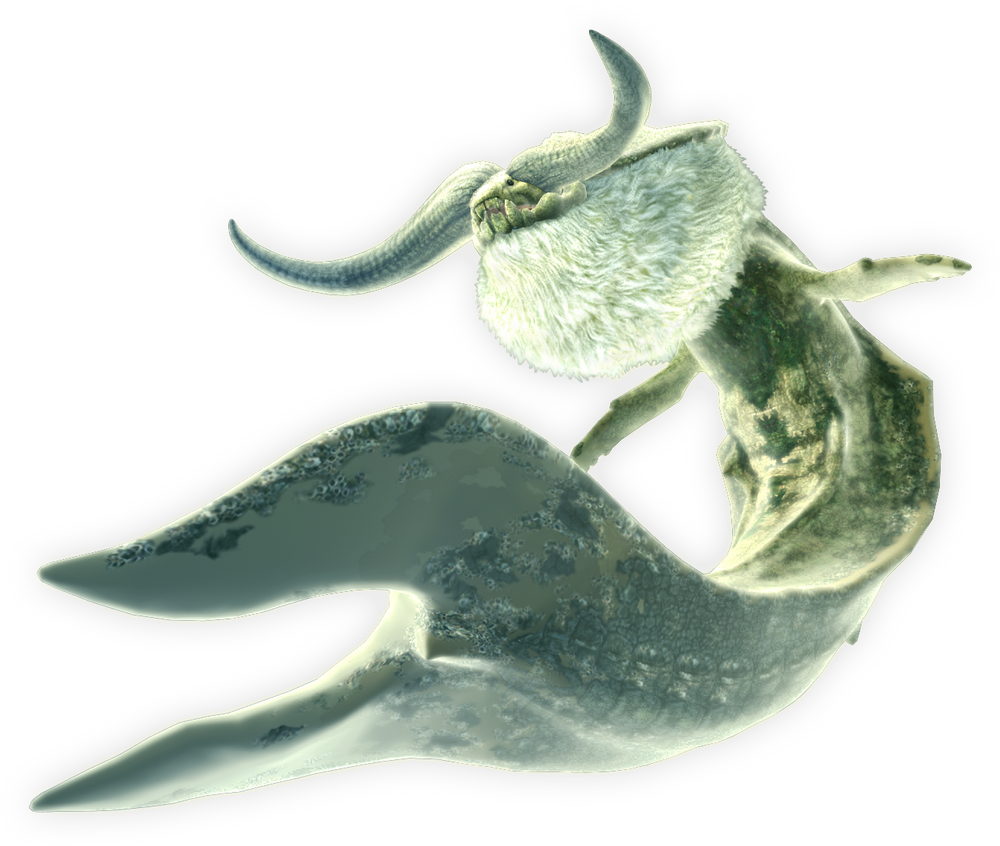 While not a Leviathan, Ceadeus is another monster that took advantage of Tri’s underwater gameplay. It’s plainly gorgeous, with a head exactly like a Dunkleosteus atop an aquatic body like nothing on earth. Its whole body is oddly textured, like a strange whale, and its horns are almost alien. It’s such an odd combination of features, but a gorgeous one. It’s straight up majestic. 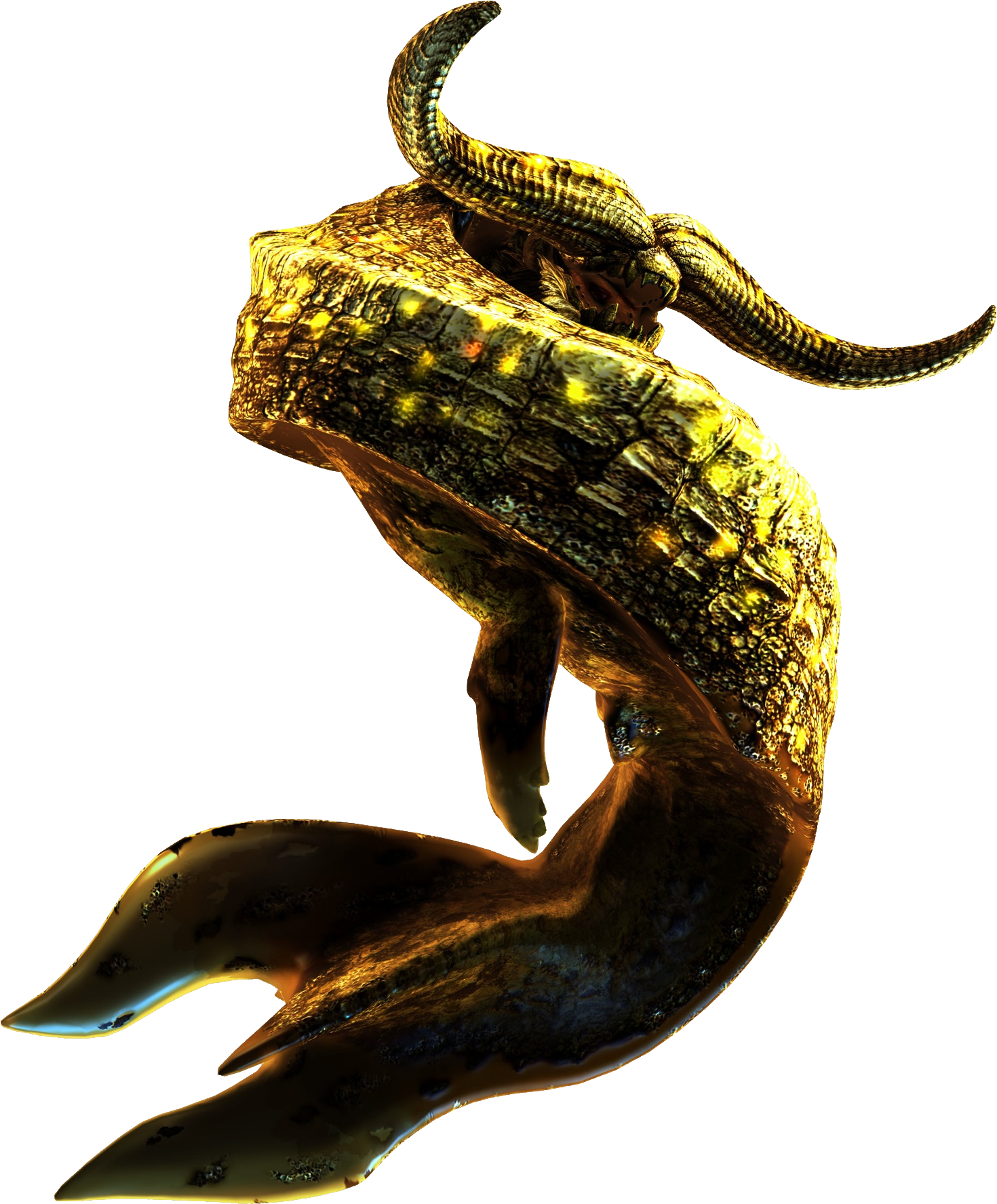 Ceadeus has an alternate color palette as Goldbeard Ceadeus, which doesn’t quite capture the original’s majesty but is quite gorgeous regardless. 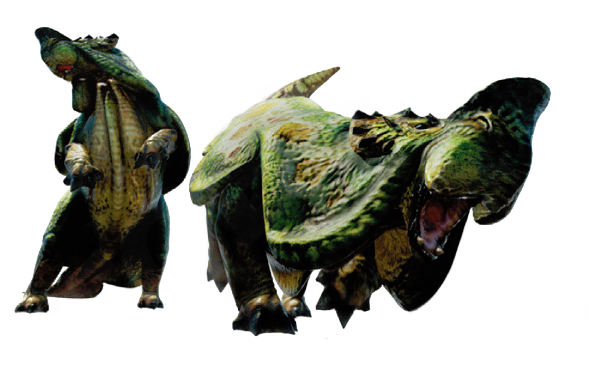 A minor herbivore, introduced in the portable game of the Tri generation, which was never translated, Slagtoths are like reptilian or amphibian hippos. I love their loose, wobbly skin and tiny little eyes. Super cute river dinos, and like hippos, quite belligerent. 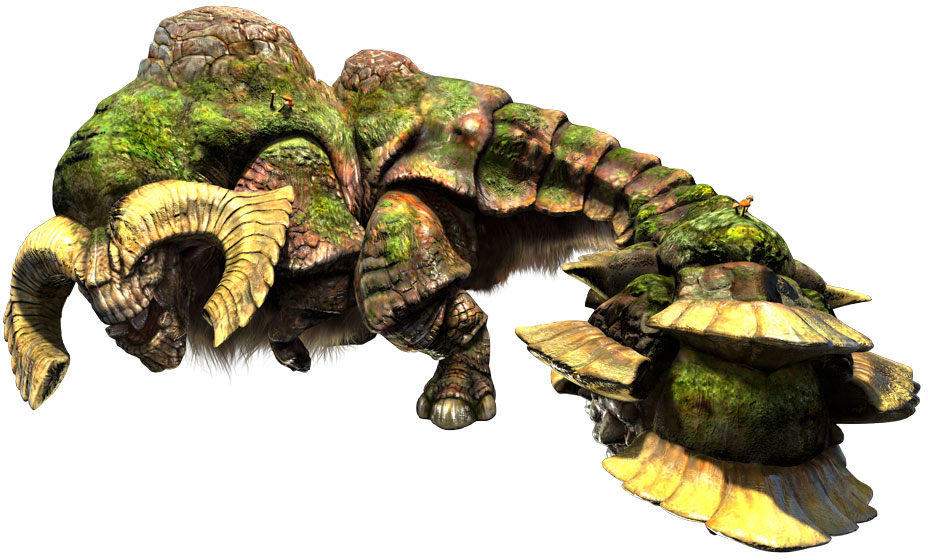 Another category of creatures that the third generation introduced were Brute Wyverns, basically theropods like bird wyverns, but distinguished by large, bulky bodies. This one is pretty great, a goat through the lens of a stony-skinned biped. I love that stony grouchy face, with those two huge incisors. The main draw of course is the huge clubbed tail, like an Ankylosaurus. What a weird combination of features. 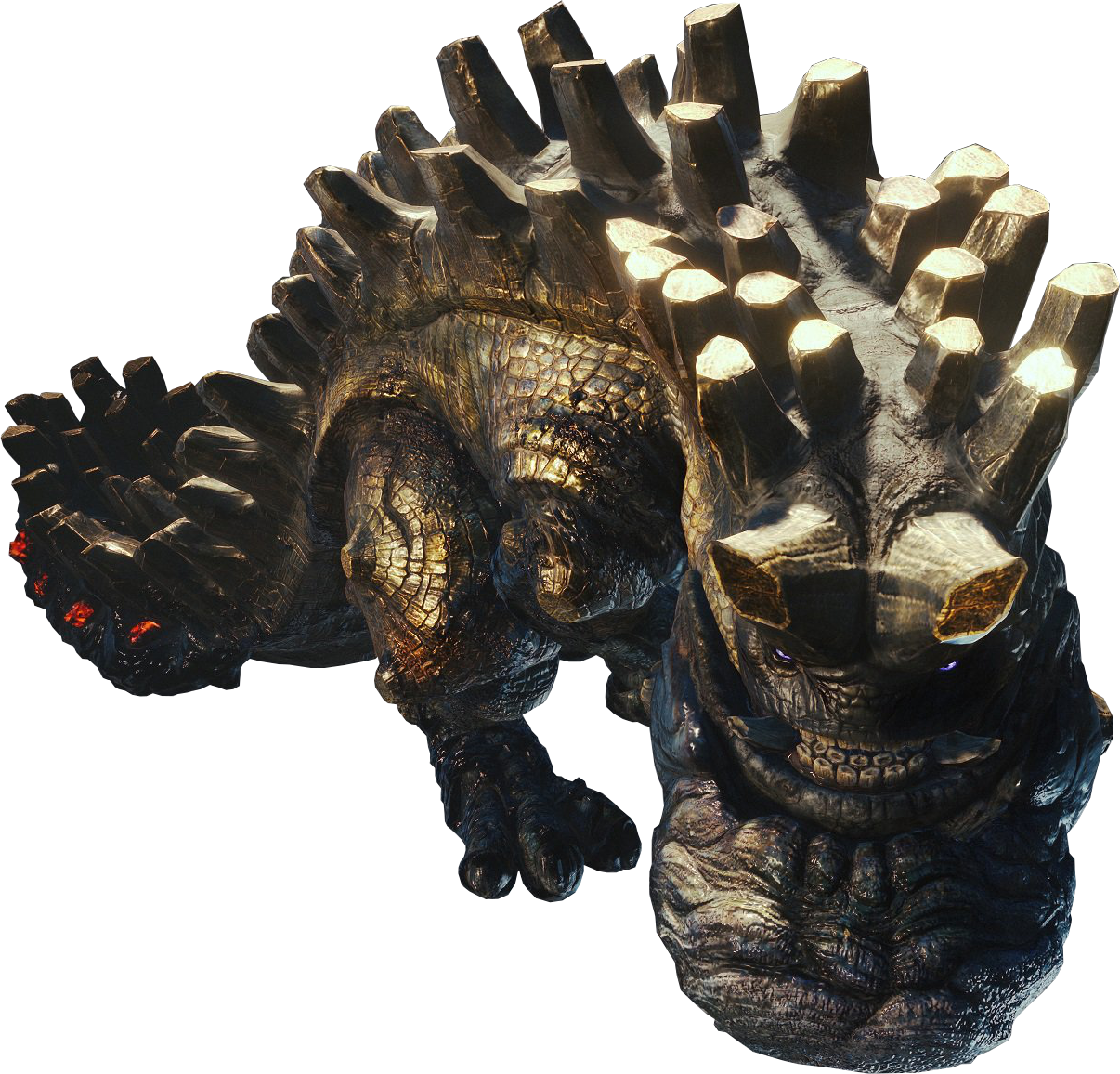 Uragaan is shaped similarly to Duramboros, but with a much creepier look. Seriously, look at that smile. This thing is just straight up Thanos. If he was a dinosaur. Which would make me care a lot more about the Marvel movies. I really love the pegs along its body. They don’t really look like anything else, and they work as treads when the Uragaan curls into a ball and rolls around. Which it does. Brilliant. 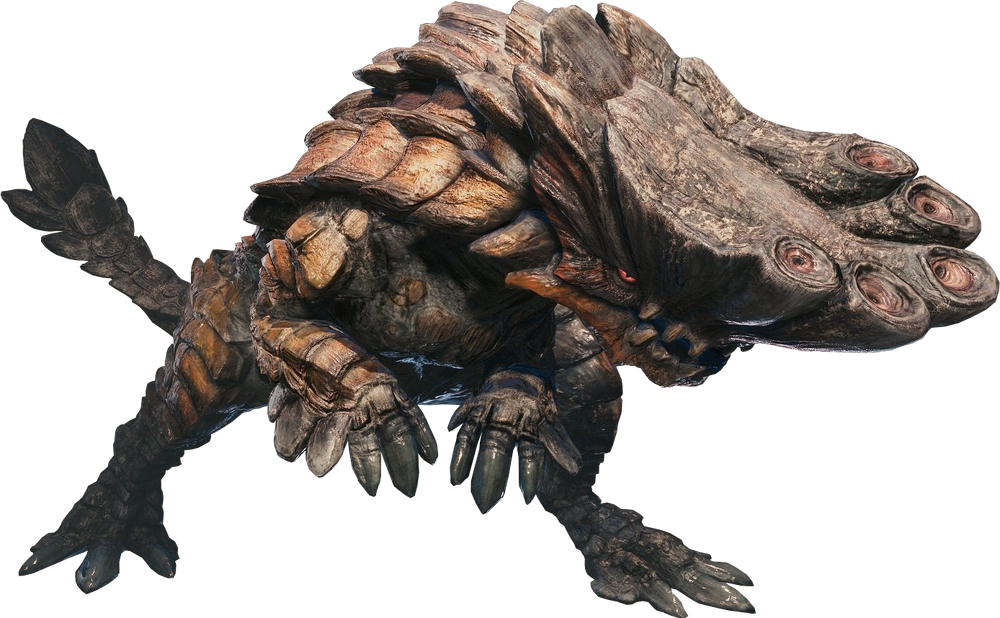 A glorious introduction to the concept of Brute Wyverns, this is the first you meet in Tri. It shows off their reliance on brute force and tough bodies. I really love that oversized crest. Tells you instantly what it uses to attack. The most interesting thing about the Barroth is that it’s actually not the carnivore it appears. It uses its head to break open giant termite mounds. 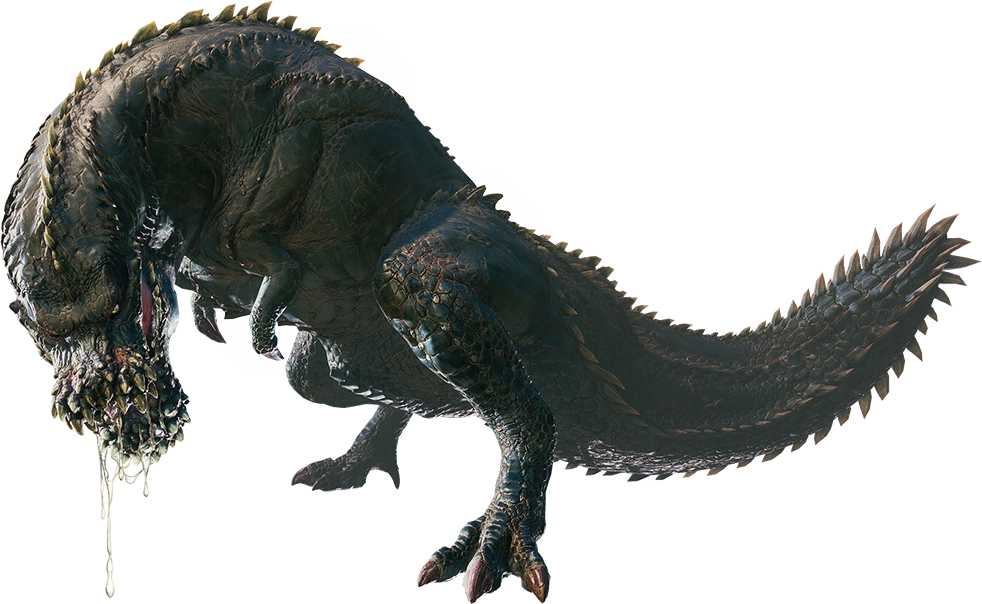 The last Brute Wyverns introduced in Tri, Deviljho holds a special place in the hearts of Monster Hunter fans. Rathalos may be the series flagship monster, but Deviljho is the one people are excited to see in each new installment. Design wise, it’s not the most interesting monster the series has to offer, although having almost all of its teeth on the outside of its mouth gives it a bit of a Resident Evil genetic abomination feel. A variant of the species from Monster Hunter Explore, a mobile spinoff, strengthens this vibe by showing us some internal structure. 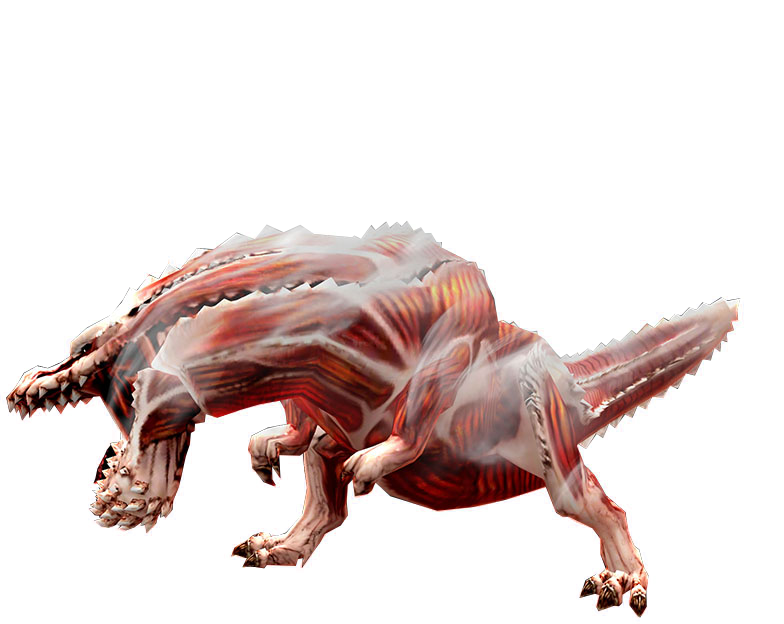 It has teeth all the way down its neck! This feature is actually known in several fish, but not any land-dwelling tetrapods I’m aware of. Deviljho really is a freak of nature! While I don’t personally take to it, it really is a good design for something with legendary ferocity and hunger, capturing that personality well. The thing looks positively gleeful as it tears into anything it comes across. It’s a worthy mascot of the series, exemplifying the way Monster Hunter can add personality to relatively simple designs.