Nowadays, there’s really only one major carnivorous group within the mammals. Just to make things nice, simple, and extremely confusing, they’re called the carnivores, or more scientifically, carnivorans. If you think of any mammal that predominantly eats meat, from bears to seals to cats, they’re probably a carnivoran. However, it wasn’t always this way.

We are very used to thinking of everything after the dinosaurs as being a continuous age of mammals, but while it is true that mammalian groups have dominated the land (although hideously outnumbered by birds in general), it’s not always been the same groups of mammals. In fact, the further back you go, the stranger everything looks. So let’s go back just about to the beginning of the cenozoic; the Paleocene.

The Paleocene is the first epoch of the Cenozoic era (that’s the one we live in). The non-avian dinosaurs had only recently gone extinct, leaving many niches open. Replacing the great predatory theropods were mammals, but not the mammals we know today. There were no wolves or big cats, not for millions of years. Instead, what dominated were things more closely related to deer and sheep than any carnivore today. I wanted to dub them “murdersheep” because that’s amazing, but it turns out they’re called mesonychids. 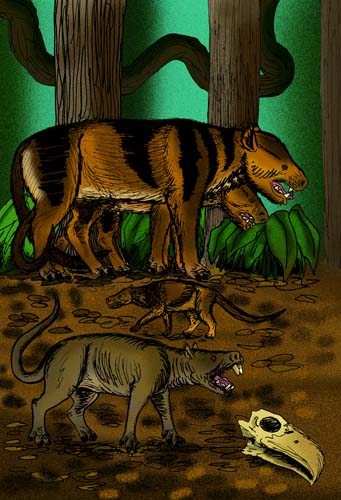 Mesonychids were unlike anything today. They walked on hooves, and had stiff backs like our modern ungulates (hoofed mammals) rather than flexible ones like modern predators. Unlike modern carnivores, they lacked carnassals, hind teeth adapted for sheering meat. With relatively blunt molars instead, they might have been adapted to crushing bones as scavengers, or even more omnivorous diets.

These fossils were quite well known by the early 20th century, so when an absolutely enormous skull that appeared to belong to a member of the family was discovered, some quick calculations were all it took to declare that the largest mammalian predator to ever stalk the land had been discovered. This wasn’t an insane claim; the cranium discovered was nearly three feet long.

This initial interpretation of Andrewsarchus is that one that most people know, resembling an enormous wolf-like animal, 12 feet long and 6 feet tall at the shoulder. This is what we see in most of our pop cultural depictions, including, as we see here, the BBC’s well-known “Walking with Beasts” series. I loved this as a kid, and this interpretation is still iconic. The dark tiger-striped design is believable but still cool and fearsome. This art similarly captures the initial understanding of the creature, but more accurately and with a more alien touch. Vaguely like a wolf, but with an absurdly overlarge skull with strangely low eyes and hoofed feet. Also, of course, protruding fangs, because saber-toothed means prehistoric. The only purely fictional depiction of Andrewsarchus I am aware of is in Cage of Eden, a manga about a plane full of middle-schoolers crash-landing on a mysterious island full of prehistoric animals, mostly Cenozoic mammals and birds. Unfortunately, I can’t recommend it. On the one hand, it’s full of underrepresented prehistoric animals that really deserve more media presence. On the other hand, it’s full of fanservice involving underage characters. REALLY underage sometimes. That aside, the Andrewsarchus is one of the cooler creatures portrayed, exaggerating the head to be even bigger and adding a monstrous hunch to its back. It’s simplistic, but I like a little bit of stylization for my monsters.

However, both of these were wrong, based on what is now considered an outdated interpretation of the fossil. No more bones were ever discovered. Andrewsarchus is still just a single isolated skull. But taxonomy has come a long way since the 20s, when the skull was first found. Further examination of the skull with modern techniques suggested that instead of a mesonychid, Andrewsarchus was instead within the artiodactyls, the even-hoofed mammals. In particular, it was among the whales, hippos, and something called entelodonts (and yes, whales are hoofed mammals, nature is the best like that). What’s an entelodont, you ask? While it may look like a more ghoulish warthog, the entelodont is actually pretty distantly related to our modern pigs. Its closest modern relatives are instead hippos and whales, and it’s that a hell of a family tree? Just like their modern doppelgangers, they were omnivorous, with impressive fangs and wear on their teeth that suggested they regularly ate bones. A warthog is already an impressive creature, with its amazingly lumpy face, and an entelodont takes that to the extreme. So, if Andrewsarchus is actually closer to these, does it still match its fearsome reputation? With the proper, more entelodont-like proportions, Andrewsarchus would be slightly smaller, but still absurdly huge and more importantly for my tastes, weird as heck. It would have been closer to a hyena than a wolf in shape, which is something I always approve of, but really, there was nothing quite like it. Forget the murdersheep, I’m all in on the hellpig. Like other entelodonts and entelodont-adjacent creatures, it’s uncertainly if it was predatory or merely a scavenger. Andrewsarchus would have outweighed any other predator in its environment, making it easy for it to bully them away from their meals, and its enormous snout suggests a powerful sniffer to go with it. Just like the entelodonts, the only rival to an Andrewsarchus was likely another Andrewsarchus. Entelodont bones are often found with serious puncture marks that fit the teeth of their fellow pigs perfectly. Sadly, the day of the Andrewsarchus was short. By the end of the Eocene (roughly 34 million years ago), its native Mongolia was starting to become the dry steppes and desert we know today due to the rainshadow effect of the rising Himalaya mountains. Simply put, moist winds from the ocean were blocked by these staggering peaks, leaving the other side dry. Andrewsarchus, as a massive predator, could not adapt quickly enough and went extinct.

Whether it be hellpig or murdersheep, the Andrewsarchus was one of a kind, and I hope its recent update can catch some fresh attention. I love dinosaurs as much as anybody, but come on, sometimes you need a prehistoric mammal to rampage in your city and devour civilians.